EAST WINDSOR, Feb. 22 – The game had been over for just a few minutes and East Windsor High coach Robert Lengyel was barely holding back tears of happiness. His eyes were full and his voice was a bit unsteady. But the sheer joy coming from him and his East Windsor girls basketball team was impossible to miss.

Not only is this the first NCCC Tournament title for the Panthers, Lengyel said it was the first championship of any kind won by a girls team at East Windsor.

“It means everything,” said East Windsor’s 5-foot-9 senior Loren D’Agostino, who scored 16 points to help lead the Panthers to victory. “Our girls teams (at East Windsor) have never won anything at all – any championship in any sport. So, we made history tonight.”

D’Agostino, the tournament MVP, and her teammate Lauren Keel, with a game-high 18 points, combined to score 34 of East Windsor’s 44 points. But everyone contributed in some way. The Panthers pulled down plenty of rebound and were able to break Canton’s pressure thanks to D’Agostino bringing the ball upcourt for much of the game.

“My coach and my team needed me,” D’Agostino said. “I did whatever I needed to do to win it.”

Canton (18-5) rode their pressure defense to a NCCC championship this season with a perfect 16-0 record in the regular season, including a 42-36 win over East Windsor in last January. Boivin missed that game with the flu.

But using D’Agostino at point guard helped the Panthers break the press defense. “We did a good job against their press and not allowing it to be a catalyst for Canton,” Lengyel said. “We have (big players) who can help get it over their press.”

East Windsor (18-5) led by as much as seven points with 5:37 remaining in the game but the Warriors rallied and had several opportunities to take the lead in the final minute.

“We played poorly for three quarters of the game and we still gave ourselves a chance to win (at the end),” Canton coach Brian Medeiros said. “East Windsor kept making shots. To their credit, they kept making plays.” 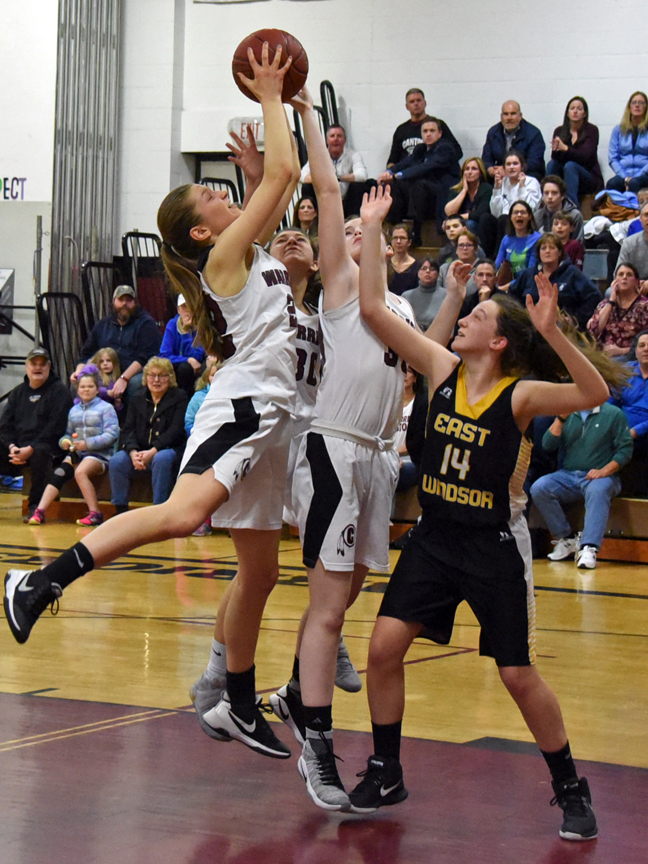 East Windsor led by six points with 2:46 remaining after Keel drained a three-point jump shot. With 1:33 left, Canton’s Lauren Eschenbrenner got a steal and a breakaway. But her layup rolled off the rim.

Canton put the Panthers on the foul line with 12.5 seconds left and Jessica Saponae missed the front end of a 1-and-1 opportunity. Delsanto came down the rebound and took off downcourt. She weaved her way past three defenders in the lane and put a layup that hit the rim and rolled off with 2.6 seconds left.

Delsanto and D’Agostino got tied up going for the rebound and it was called a jump ball with the alternate possession arrow pointing in Canton’s direction. So the Warriors had one last chance to inbounds the ball and get off a potential game-winning shot.

But freshman Kristin Boivin deflected the shot from Allison Celmer to secure the win for East Windsor.

East Windsor’s Lauren Keel finds its tough to get to the basket in Thursday’s win over Canton in the NCCC Tournament final.

East Windsor led for most of the game. Canton had a 9-5 lead early after Eschenbrenner drained a three-point shot but the Panthers finished the quarter on a 8-2 run and never trailed again.

Canton tied the game at 19-19 on a pair of Belle Magna foul shots with 3:40 left in the second quarter but the Warriors didn’t have a field goal in the final 4:19 of the second quarter as the Panthers took a 23-19 lead at halftime.

Back-to-back baskets from Keel and a basket from D’Agostino in the lane fueled a 7-3 run to open the second half for East Windsor and give them an eight-point lead.

“We certainly don’t have any fear for anyone we play,” Lengyel said. “It’s been finding the belief in ourselves, believing in themselves and their abilities.”

Canton was led by Charron with a game-high 21 points. Magna scored seven while Gracie Treacy added five off the bench. Charron and Celmer each had seven rebounds while Charron had four assists and three steals.

“I still don’t think we have the mindset that we’re the defending state champions,” Medeiros said. “We won the league title but I think we still look at ourselves as the underdog. They don’t seem to have the self-confidence they should have at this point.

“In this league, we’re like the (New York) Yankees and (Dallas) Cowboys,” he said. “Everyone is going to give us their best shot.”

The Warriors return to the court in Tuesday’s Class S tournament. Canton is seeded No. 2 in Class S and will host No. 31 Trinity Catholic-Stamford in the first round. Trinity Catholic, which plays in the FCIAC in Fairfield County, went 8-12 in the regular season and promises to be a challenging contest.

NOTES: This was Canton’s first appearance in the NCCC Tournament finals since 1999. The last time that Canton won was in 1997. This was East Windsor’s second-ever appearance in the NCCC Tournament final and their first victory. The Panthers lost to Suffield in last year’s final. The All-Tournament team included Charron and Eschenbrenner from Canton, Keels, D’Agostino and Jessica Saponae from East Windsor and Erin Carucci of Suffield. … There are nine players in East Windsor’s entire program. There is no junior varsity team. … The Panthers have won eight straight games since they lost to Canton in January. … East Windsor has won three of the last four games between the two teams, including a two-point win, 46-44, in last year’s NCCC Tournament semifinals.

Residents protest and take a stand for justice in Avon