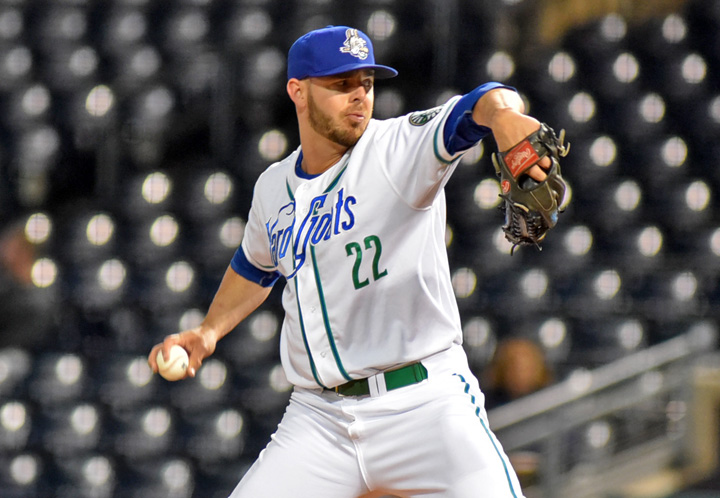 Yard Goats reliever Matt Pierpont picked up his league-leading 15th save Sunday in an 8-5 win over Altoona.

The Yard Goats (28-29) have played in front of three consecutive standing room only crowds of 6,850 fans and drew 20,550 fans to see them play over the past three days. After losing seven straight games, the Yard Goats got back on the winning track with victories on Saturday and Sunday.

On Sunday, the Yard Goats led 8-1 after six innings, before Altoona started pecking away with two runs in the seventh and two in the eighth off of Hartford relievers Sean Nolin and Scott Griggs.

With Altoona’s Will Craig, who leads his team in RBI at the plate, Pierpont was called in from the bullpen. He struck out Craig looking and hurled a perfect ninth, to preserve Chris Jensen’s first victory as a Yard Goat.  Pierpont has now converted on his last 10 save opportunities and has not allowed a run in his last eight appearances, covering 9 1/3 innings.

Ryan Metzler led the Yard Goats attack with a double, two singles and two RBI. Dom Nunez and Nelson Molina each had two hits and an RBI, as Hartford had double digits in hits for the second straight game.

On Saturday night, Lambert took center stage. Lambert, a second round draft choice of the Colorado Rockies in 2015, went nine innings to pick up the win.

Lambert retired the lead off hitter in all but one inning, walked one and struck out four.  He retired the side in order in the ninth inning and set down 12 of the last 13 Curve hitters.  The right hander, who threw 102 pitches, even delivered at the plate with an RBI-double in the eighth inning.

The Curve are Double A affiliate of the Pittsburgh Pirates. Since both teams are National League affiliates, there is no designated hitter and the pitchers do hit.

The Yard Goats open a six-game road trip at Erie on Tuesday night at 7:05 p.m.