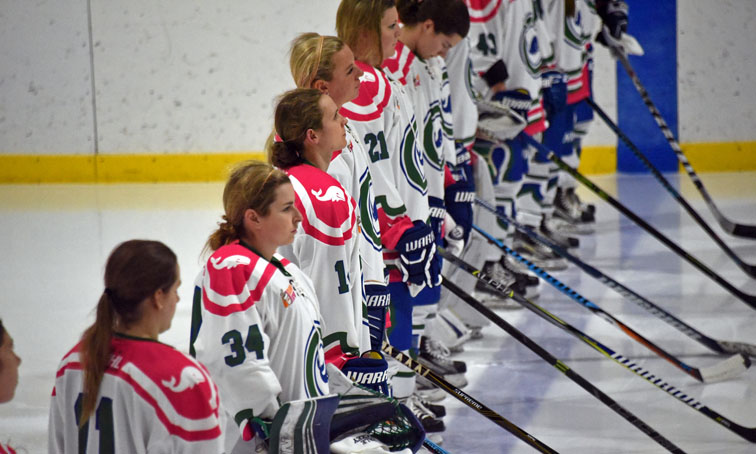 The Connecticut Whale of the National Women’s Hockey League have signed seven players in the past week.

Free agency in the National Women’s Hockey League began on June 1. Through July 4, the Stamford-based Connecticut Whale had not signed a player.

In the last week, the Whale have signed seven players including five on Tuesday and a sixth player on Wednesday.

Löwenhielm played with Sweden at the 2014 Winter Olympic Games in Sochi but she also just finished a four-year career at the University of Minnesota Duluth. The 5-foot-8 forward scored 10 goals with 32 assists and 42 points in 144 games for Minnesota-Duluth.

In the 2014 Olympics, Löwenhielm had a goal and two assists in six games. She has also represented Sweden at two world championship tournaments.

“Playing against and playing with the best players in the world will be both fun and challenging,” Löwenhielm said. “I was really happy and excited to sign this contract because that meant that I was able to make one of my dreams come true.”

Griffin is a former Harvard forward who played for the unified Korean Olympic team at the 2018 Olympics, scoring that team’s first-ever goal. She also played for South Korea at the world championships in 2017 and 2018.

Griffin, 29, is graduating from Duke with a PhD in biological anthropology later this summer.

“My teammates on Team Korea are definitely among my top inspiration to keep playing,” Griffin said. “I’m delighted to be part of the Whale as we contend for the Isobel Cup, and grateful to the NWHL because it’s an incredible platform to be able to train and compete while continuing to play for Team Korea in international competitions.”

Griffin also likes the Whale swag. “The Whale were my first choice because I live in Connecticut and they clearly have the best uniforms,” she said.

Walther is the first goalie that Connecticut has signed for the upcoming 2018-19 season that begins in October. Walther was the NESCAC women’s hockey player of the year last winter for Hamilton, setting school records with a 1.08 goals against average, a .960 save percentage and 10 shutouts. She was an American Hockey Coaches Association (AHCA) All-American as a junior.

Hughson, a Connecticut native who grew up in East Haddam and played at the Gunnery School in Washington Depot, was an AHCA All-American last winter at Elmira, scoring 28 goals with 21 assists for 49 points in 30 games.

Hughson, a 5-foot-4 forward, led Elmira to a 25-3-4 record and to a second place finish at the 2018 NCAA Division III championships. She had five game-winning goals for Elmira, which lost to Norwich University, 2-1 on a goal in the final 1:33 of regulation in the championship game. She was the United Collegiate Hockey Conference’s player of the year.

“I’m beyond excited for the opportunity to play at the professional level this coming season,” Hughson said. “After the way last season went, I was not ready for my hockey career to be over.”

Beattie, a 5-foot-8 defenseman, played 13 games for the Whale last year after four years at Williams College. She didn’t have a point last year in the NWHL.

Mrázová, 25, just finished her collegiate career at Minnesota-Duluth, where she scored 25 goals with 50 assists for 75 points in 117 games. She had eight goals and 13 assists (21 points) as a senior this past winter.

“I’m joining this great league and organization because I want to continue playing hockey at the highest level,” said Mrázová, who player with the Czech Republic national team at the 2013 world championships.

The Whale, under second-year coach Ryan Equale, are looking to improve on a 3-11-2 record, a campaign that saw Connecticut set new league records for fewest wins and goals (26) in a season.

Fluke, Ade are Whale’s first signings for upcoming NWHL campaign
Whale get most home games in second half of 2018-19 NWHL schedule