The town hopes to bring a proposal for a synthetic turf field and new eight-lane track and field complex at Avon High to voters in Avon this December.

AVON, August 15 – A proposal to install two new synthetic turf fields at Avon High, a new eight-lane track and field facility, new bleachers and press box has been scaled back and the town is looking to bring the reduced proposal to referendum in December.

In December 2016, the Avon Town Council and Board of Education endorsed a $4.6 million proposal to upgrade athletic facilities at Avon High. However, request for financial support for the project from the state of Connecticut went unanswered.

This March, Town Manager Brandon Robertson and Town Council chair Republican Heather Maguire met with Benjamin Barnes, secretary of the state Office of Policy and Management and the state budget director and Barnes said that no funding from the state would be available.

Now, the town of Avon is working to bring the reduced $2.6 million proposal to referendum in December to allow town residents to vote on the proposal. Robertson released the new proposal at a recent special meeting with the Town Council and Board of Education.

The revised proposal would install a synthetic turf field to replace the current football field at Avon High, a new eight-land track and field facility and conduit for lights in the future. A second turf field, where the field hockey field is currently located, a 1,000-seat grandstand and a new press box were cut from the project.

Robertson said the turf field project and a proposal to replace the town radio network would be on the agenda in the referendum. Town officials said that the estimated cost of the radio project is currently about $3.8 million.

The cost of the turf project could rise to $2.9 million, town officials said, if an alternative material is used for the synthetic turf field. The current proposal calls for coated crumb rubber fill between the blades of plastic grass.

Football, field hockey, soccer and lacrosse could be played on the synthetic turf field.

Lights aren’t part of the proposal that the town will bring to voters but the project will include conduit for lights if the town chooses to install them in the future.

A few things need to happen to hold the referendum.

Town officials and volunteers have been working since early 2014 on plans for a synthetic turf field in Avon. When the plan was being developed, Robertson said that the town was anticipating three sources of funding – town funding, state funding and local fundraising efforts. This was the plan used to play for a recent expansion project at the Avon Free Public Library.

The town was hopeful that they could have received some state assistance. Over the past 12 years, the state helped fund 15 projects to install synthetic turf fields, spending $13.7 million, according to documents provided by State Senator Kevin Witkos in 2016. Most projects were funded through the Bond Commission but some towns received money from the Small Town Economic Assistance Program.

Lights were not included in either Avon High proposals but the original proposal sent to the state in 2016 called for town policies that would limit night games to just 15 a year and no night games from December through March. 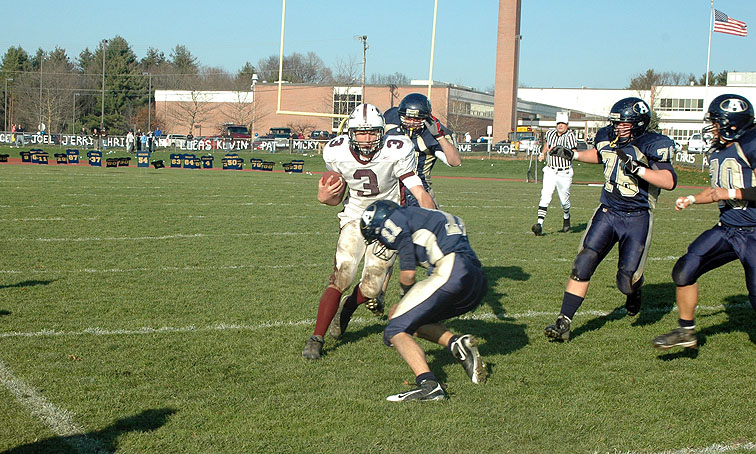 Canton and Avon battle on the grass at Avon High School in 2009.