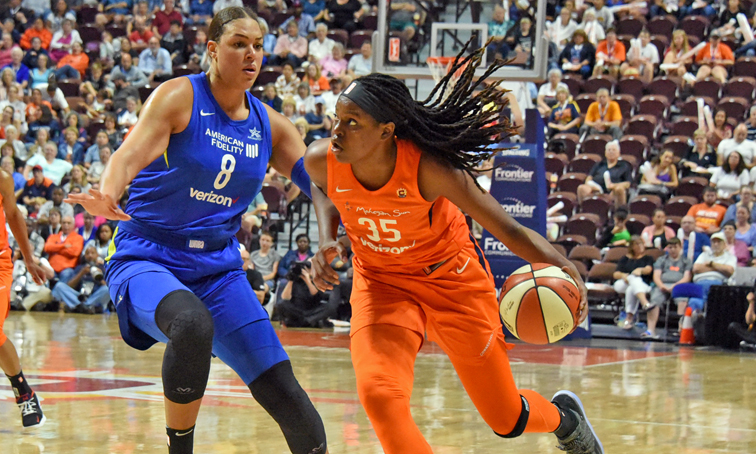 Connecticut’s Jonquel Jones is averaging 19.5 points in the last six games for the Sun, who host Phoenix in the WNBA playoffs on Thursday night.

UNCASVILLE, August 22 – For a second straight season, the Connecticut Sun will host the Phoenix Mercury in a single-elimination game to advance to the WNBA semifinals.

Connecticut (21-13) will host Phoenix (20-14) on Thursday night at 8:30 p.m. (ESPN2) with the winner advancing to face top-seeded Seattle. The last time that the Sun were among the final four teams in the WNBA playoffs was in 2012 when they lost to the Indiana Fever in the Eastern Conference finals.

Once again, Taurasi, 36 and Griner lead the Mercury. Taurasi, now in her 14th WNBA season, led the Mercury averaging 20.7 points a game while Griner, a 6-foot-9 center, averaged 20.5 points, pulled down a team-leading 7.7 rebounds a game and blocked 2.6 shots a game. DeWanna Bonner, the 6-foot-4 forward from Auburn, averaged 17.3 points a game.

In the final month of the season, Taurasi averaged a team-high 22.0 points and 7.4 assists as Phoenix finished with five wins in their last seven contests, including four straight to close out the regular season. She had 26 points and six three-point shots in the Mercury’s first round playoff win over Dallas, 101-83, in the first round on Tuesday. She is now 16-5 in elimination games in her WNBA career.

Bonner scored a game-high 29 points and pulled down 11 rebounds in the win over Dallas.

Connecticut finished the season strong, winning nine of their last 10 games. They were sparked by the WNBA’s Sixth Man of the Year award winner Jonquel Jones, who averaged 11.8 points and 5.5 rebounds this year. But in the last six games of the season, she has averaged 19.5 points. She started the final two games of the year when All-Star forward Chiney Ogwumike rested a sore knee she hurt against Dallas.

Jones, a 6-foot-6 forward, has made herself a threat in the paint and from the three-point line. She even had a career-high seven assists in Sunday’s win over Los Angeles to secure the No. 4 seed in the playoffs including a first round bye. 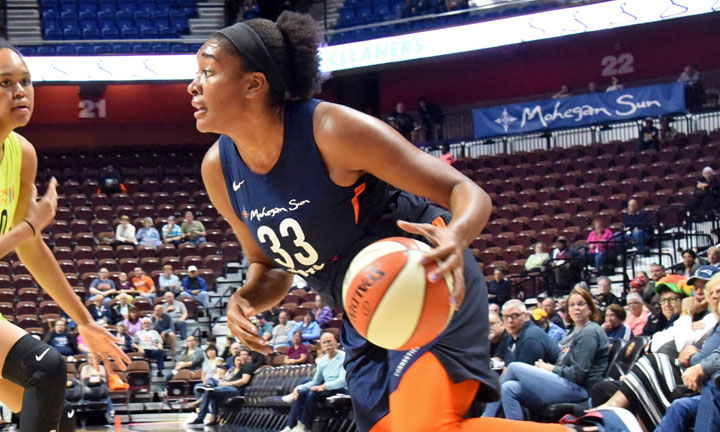 Connecticut’s Morgan Tuck tied her season-high with 20 points in a game against Phoenix in June.

Jones had 26 against Minnesota and 27 points against Dallas in the last week. But the strength of this Sun team has been their versatility. On a given night, anyone can catch fire and carry the squad.

“Anyone we put out there it is hard for teams to guard us because we don’t have one main player who has to touch the ball every time down the floor,” said Connecticut’s Morgan Tuck. “It can be JJ (Jones) night. It can be Chiney’s night. It can be (Alyssa Thomas) or Jasmine (Thomas). With that balance we have, anyone on the floor can get an open shot.”

Nine different Sun players have scored 20 or more points in game this season – a WNBA record.

The Sun led the league in scoring, averaging 87.6 points a game along with leading the WNBA in rebounds per game (36.8). They were second in field goal percentage (46.6) and three-point shooting (36.7).

Phoenix won two of the three games between the two teams but lost in Uncasville in July, 91-87.

Canton remains undefeated in NCCC with wins over Rockville, Bolton

Canton clamps down on Stafford for dominating opening day victory