Players on the Norwalk High girls basketball team begin to celebrate after beating New London for the Class LL championship Saturday in Uncasville. More photos from the game.

UNCASVILLE, March 16 – The big lights shining on the floor of the Mohegan Sun Arena were a little bright for No. 1 Norwalk girls basketball team early in Saturday’s Class LL championship game. No. 2 New London scored the first 12 points of the game before the Bears could put up a basket with 1:25 left in the first quarter.

But Norwalk, despite trailing by as many as 15 points in the second period, didn’t panic and slowly climbed back into the game.

The Bears forced six New London turnovers in the final 3:08 of the contest, blocked a shot and got a basket from Naeva Rene with 2.4 seconds left in regulation to stun the Whalers, 55-53 and win the Class LL title and finish the season undefeated (28-0).

“We’re a second half team, anyways” Norwalk coach Richard Fuller said. “If we could get scores, stops, scores and stops, I knew we could get it done.”

Rene scored just five points but made the biggest basket in the waning seconds of the contest. “We just said we had to keep our heads up and finish this game as strong as we could,” she said.

New London, which dropped a hard-fought 49-47 decision to Norwalk on January 26, led by seven points with 4:15 remaining, 51-44 after Taina Pagan scored on a layup. But the Bears defense turned up the pressure on the Whalers, who made six turnovers with three coming off Norwalk steals.

Norwalk’s Carsyn Langhorn (10) finds the path to the basket difficult thanks to defense from New London’s Taina Pagan, right and Xaryia Melendez. More photos from the game.

Sanaa Boyd and Belinda Hunte each sank a pair of foul shots for Norwalk to cut the lead to three with 2:35 remaining, 51-48. A three-point shot from Ashley Wilson with 1:43 tied the game for the first time at 51-51.

The Whalers coughed up the ball with 29 seconds left to set up an opportunity for Norwalk to take the lead. Norwalk’s Anaijah Morgan dribbled into a double team and slipped the ball to Rene, with her back to the basket.

Rene turned with the ball and leaped high into the air and banked the ball off the backboard for the lead. “I just jumped as high as I could so we could become state champions,” she said. 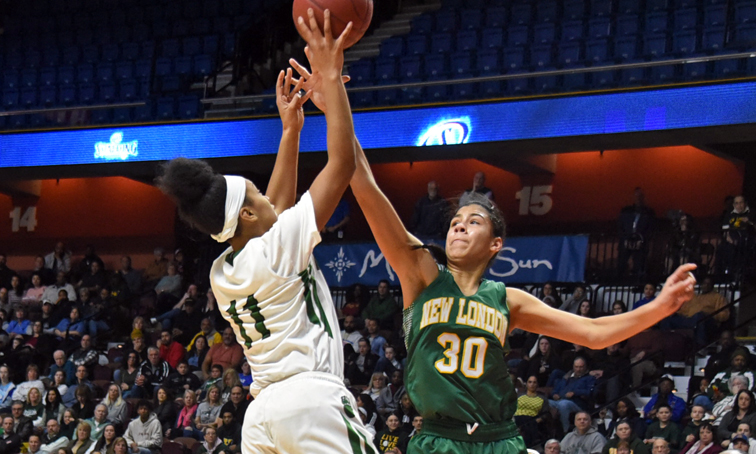 Norwalk was delirious with joy while the Whalers were stunned that their lead had slipped away in the final seconds.

“It’s great to know we are finally there and we finally made it (state champions),” Rene said.

For Norwalk, it was their first state championship in 19 years since the year 2000.