NEW BRITAIN, May 30 – Canton High junior Chelsea Mitchell had a personal best time in the finals of the 200 meters and tied her personal best in the 100 meters. It wasn’t enough to catch Bloomfield’s Terry Miller, who swept the 100 and 200 meters  with meet-record performances in both events.

Bloomfield dominated with 128 points with Old Saybrook finishing second with 73. East Hampton was third with 69½ points with Canton in fourth place with a school record 62 points.

Canton, which won their first NCCC championship this spring in outdoor track and field, had several top 10 finishes — led by Mitchell, who was second in the 100 and 200 meters behind Miller.

Miller won the 100 meters with a meet record time of 11.93 seconds, breaking the mark set by Northwest Catholic’s Shayla Wallace (11.98) set in 1995. Mitchell led early before Miller made her break midway through the race, Mitchell matched her career-best time of 12.02 that she ran at last week’s NCCC championship race. Cromwell’s Andraya Yearwood was third with a time of 12.28 seconds.

In the 200 meters, Mitchell raced out of the blocks quickly to try and build a lead. But Miller, again, was too strong down the stretch and finished with another meet record time of 24.47 seconds, erasing Wallace’s 1997 record of 24.76 seconds.

Mitchell finished with a personal-best time of 24.79 seconds, more than a second better than Bloomfield’s Jillian Mars in third place (25.92 seconds). “I tried to get out as fast as I could because that is where I excel in the first 100 meters and then you just power through,” Mitchell said. “I am happy with my times. I look forward to next week (at the State Open).” 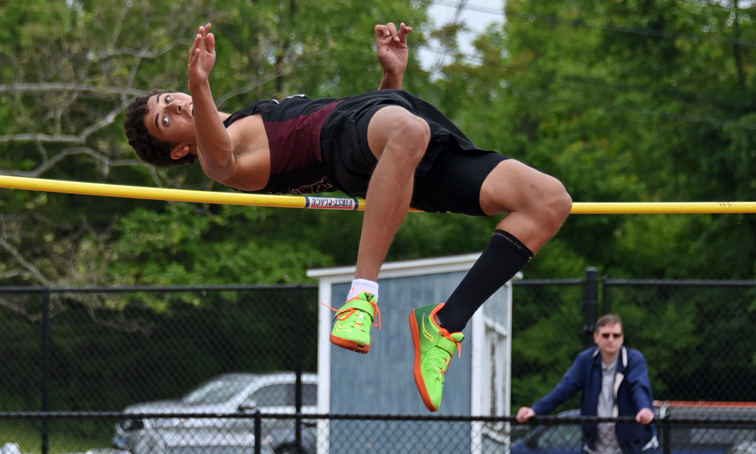 Canton’s Peter Fuller finished second in the high jump at Thursday’s Class S championships with a leap of 6-foot-4.

In the long jump, Mitchell took charge immediately hitting a jump of 18 feet, four inches with her first jump of the day to put her competitors on edge immediately. Mitchell won the event by just under two feet. Capital Prep’s Saryah Windborne was second with a throw of 16-5 feet.

Senior Madeline Archangelo picked up a pair of third place finishes. She was third in the triple jump with a leap of 34-2½ feet on her first jump of the competition and third in the javelin with a throw of 101-3 feet.

Archangelo also competed in the 100 hurdles where she had the top qualifying time of 16.37 seconds. But it can be tricky in track and field to balance competing in three events at the same time. You have to ask the official running a respective event for permission to leave and resume competing in another event.

She asked to leave the javelin competition, which was being held in a field adjacent to Willow Brook Stadium where the shot, discus and javelin are hosted. She hustled across a bridge that crosses Willow Brook and made her way back to the main Willow Brook Stadium. But she arrived too late, heart-breaking seconds before the 100 hurdles final was to begin.

She had tears in her eyes but there was no choice but to get right back to work. She had to complete her action in the javelin and triple jump.

Canton’s 4×800 relay (Lila Hunt, Jenna Cuniowski, Emma Gallant, Helena Winkler) was tenth with a time of 10:39.88. The top eight places in each event earned points while the top six finishers were awarded medals.

Celmer finished eighth in the 300 hurdles with a time of 51.29 seconds.

The Canton High boys track and field team finished 14th with 11 points – their first finish outside the top 10 since the second year of the program in 2006.

Peter Fuller won a pair of medals for the Warriors, taking second in the high jump and sixth in the 110 hurdles.

Fuller, who finished second in New England in the high jump during the indoor season with a leap of 6-foot-7, was on the verge of winning his first Class S championship. Fuller cleared 6-foot-4 on his second jump and was leading the event while Bloomfield’s Sean Dixon Bodie cleared 6-4 on his third attempt.

Dixon Bodie just missed his second attempt at 6-6, grazing the bar. But on his third attempt, he slipped over the bar and his teammates roared in celebration as he landed safely on the mat to win the Class S title.

Fuller and Dixon Bodie will get a chance to compete again at Monday’s State Open championships in New Britain. The top five finishers from each CIAC meet (LL, L, MM, M and S) qualified to compete at the State Open.

Canton’s Brandon LaClair finished tenth in the pole vault with a leap of 10-0 feet while teammate Michael Cavanaugh was eleventh in the 300 hurdles with a time of 43.76 seconds.