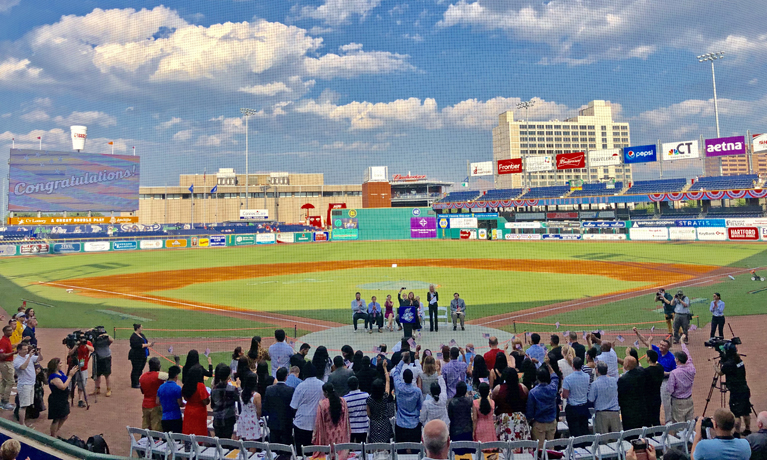 The Yard Goats and the U.S. Citizenship and Immigration Services hosted the ceremony near home plate before the start of Wednesday night’s Eastern League baseball game against the Bowie Baysox.

“We are honored to once again be a part of such a patriotic and moving naturalization ceremony,” said Tim Restall, president of the Yard Goats, the Double A affiliate of the Colorado Rockies. “Having the opportunity to host this event as we celebrate America’s birthday with the Yard Goats today is particularly special for our team. Baseball is America’s national pastime and what a better way to welcome in 60 new U.S. citizens than at a Yard Goats home game in Hartford.”

After the game with Bowie, the Yard Goats hosted a fireworks display in honor of the July 4 holiday.

The Yard Goats hit the road after the game for a series in Trenton, New Jersey. Hartford returns home to Dunkin’ Donuts Park on July 11 when they host the New Hampshire Fisher Cats, the Toronto Blue Jays’ Double A affiliate beginning at 7:05 p.m.

Canton’s Board of Finance hopes to set budget, mill rate on Monday

Scholar Athlete banquet goes on as a virtual event on TV, internet