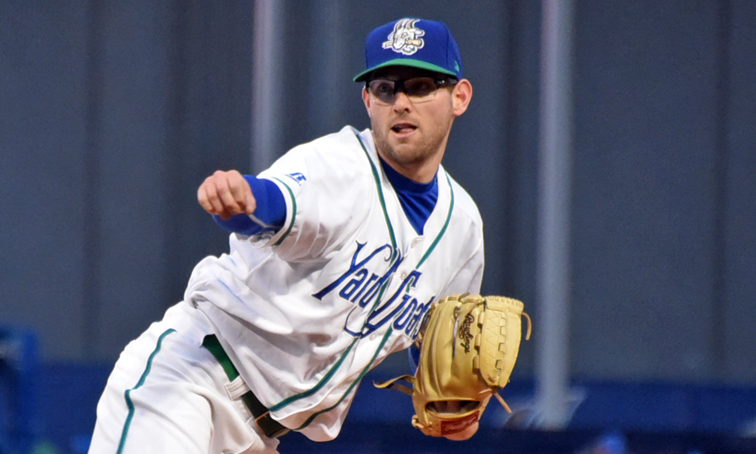 Hartford’s Brandon Gold won his tenth game of the season Sunday at the Yard Goats swept Binghamton with a 6-1 victory.

The Hartford Yard Goats are picking up steam as the number of regular season games dwindles.

The Yard Goats (65-28, 28-28 second half) swept the three-game series with the New York Mets’ Double A affiliate and have won a season-high fifth straight game. With three victories this weekend, the Yard Goats moved within four games of the Reading Phillies for a spot in the Eastern League playoffs, slicing two games off the Phils’ lead.

Trenton has already clinched one of the Eastern Division playoff berths by winning the first half championship. The Yard Goats will host Reading (72-53, 33-25 second half) for a crucial four-game series beginning on Thursday (August 22) at Dunkin’ Donuts Park. The Yard Goats have to finish ahead of Reading to secure a berth in the Eastern Division playoffs in September.

Gold (10-5) was impressive. He scattered six hits in eight innings of work and struck out six. He retired nine consecutive batters from the third to the sixth inning. In the fourth inning, he struck out Binghamton’s Quinn Brodey for his team-leading 100th strikeout of the season.

Jones’ six RBI in a single game tied a team record set by current Colorado Rockies infielder Ryan McMahon when he was in Hartford in April 2017 against Harrisburg.

Hartford took a 2-0 lead in the second inning. Colton Welker began the rally with a double and later scored on a single by Mylz Jones.  Later in the inning, Hartford’s Scott Burcham drove in Brett Boswell with a double to left field, giving the Yard Goats a two-run lead.

The Yard Goats added a pair of runs in the third inning with four consecutive hits.  Tyler Nevin, Colton Welker and Brett Boswell each singled before Mylz Jones cracked a double, scoring two to give the Yard Goats a 4-0 lead.

Hartford made it 7-1 in the fifth inning as Jones blasted a three-run homer off reliever Joseph Shaw. It was his seventh home run of the year. Boswell hit a solo home run in the seventh inning – his 14th of the season – and was 3-for-3 on the day with a home run, double and one RBI.

The win comes after a hard-earned victory on Saturday night.

Hartford catcher catcher Brian Serven cracked a two-out single in the seventh inning, driving in Colton Welker for the first run of the game, as Hartford defeated Binghamton 2-1. Hartford took a 2-0 lead on Bret Boswell’s RBI single in the ninth inning before the Mets affiliate got a run in the bottom of the ninth inning

Yard Goats closer Scott Griggs struck out Binghamton’s Barrett Barnes to end the game with runners at second and third base for his 13th save of the season.

Before the big series with Reading, the Yard Goats begin a three-game series in Altoona against the Cleveland Indians Double A affiliate. Hartford will play 16 games in 15 days to close out the regular season.