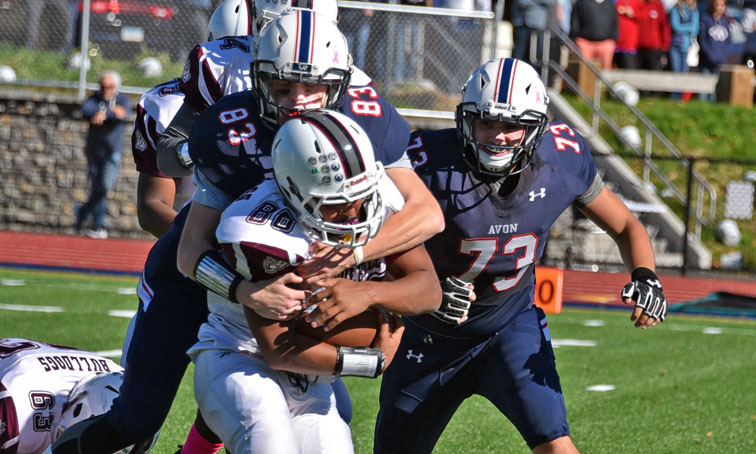 AVON, October 19 – It’s been tough for the Avon High football team in the first four games of the 2019 campaign. The Falcons didn’t expect to go undefeated but they expected to get some victories and be more competitive.

The Falcons had their moments but dropped consecutive decisions to No. 6 Bloomfield, Tolland, Guilford and Lewis Mills. In four games, the Falcons managed just 10 points.

For the second straight year against the Bulldogs, the Falcon defense was firm. Nolan blocked a punt that teammate Griffin Franenhoffer recovered and Avon intercepted two passes (Quantrel Stewart and Chris Borquin).

Avon allowed Bulkeley co-op just 13 yards of offense – two yards passing and a minus 15-yards rushing. The rushing total was impacted by a 10-yard sack from Jack Bredice and a 12-yard sack by Falcon lineman Chris Gens.

A year ago, the Falcons also beat the Bulkeley co-op in a steady rainstorm in Hartford. Playing a muddy, water-covered field, Avon held the Bulldogs to minus 41 yards of offense and made 13 tackles for a loss.

On Saturday, Avon had little trouble with the Bulldogs, scoring on six of their first seven possessions. The only blemish was kicker Kevin Mullaj just missing by a few inches on converting on a 37-yard field goal into the wind.

Avon’s 49 point margin of victory is tied for the fourth largest win in the program’s 60-year history. Avon had a 49-point win over the Housatonic/Wamogo co-op team nine years ago in 2010. The Bulkeley co-op squad has dropped 16 consecutive games since the final weeks of the 2017 campaign.

Quandrell Stewart ran for a game-high 51 yards on eight carries while Francisco Longo ran for 50 yards on six carries. QB Tabor Engle ran for a career-high 39 yards on four carries.

“Tabor delivered the ball really well,” Redman said. “And the offensive line was fantastic for him. The defense was tough. Give Tabor credit, he has struggled in some games and today, he lit it up.” 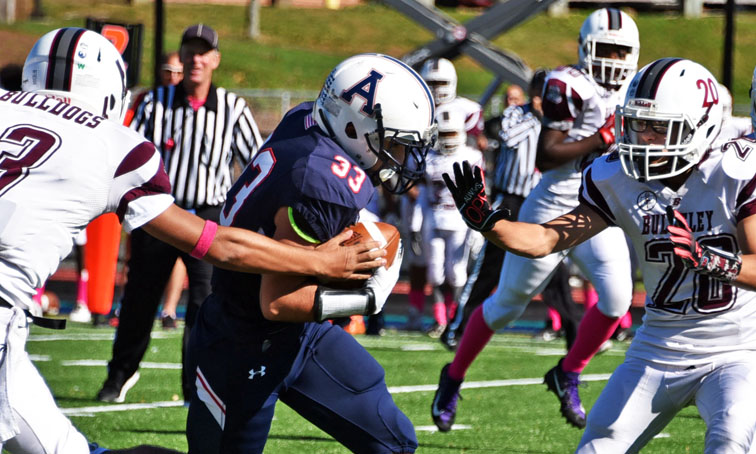 Avon’s Francesco Longo (33) runs for yardage in Saturday’s 49-0 win over the Bulkeley co-op.

Avon (1-4, 1-2 CCC Div. III East) jumped on the Bulldogs immediately. They marched 72 yards on eight plays on their opening drive of the game. They scored with just 2:35 gone in the game with Longo scoring from the two-yard line for a 6-0 lead. The extra point was missed.

Key plays on the drive were Engle completing a 14-yard pass to Nolan and running 17 yards to the Bulldog two-yard line.

Near the end of the quarter, Nolan blocked a punt that Franenhoffer recovered on the Bulkeley 31-yard line. The Falcons extended the lead to 28-0 on a 30-yard pass from Engle to Nolan.

A 5-yard touchdown run from Longo made it 34-0 with 3:58 left in the second quarter while Engle complete a 45-yard pass to Tyler Brokenshire right down the middle of the field for a 41-0 lead with 2:05 remaining in the first half.

Pinned deep in their own territory, the Bulldogs intentionally took a safety earn in the fourth quarter to extend Avon’s lead to 43-0. Avon’s Cameron Casey added a final TD with 3:55 left in the game. 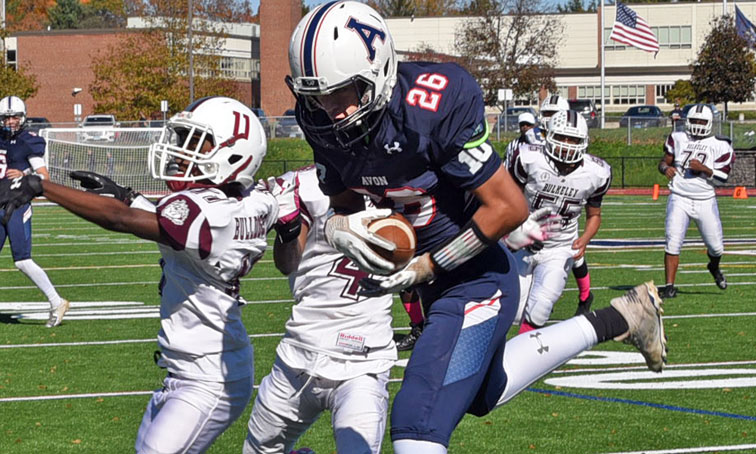 Redman was asked if this was a satisfying win coming after four losses to open the season.

“The four teams we played were just better than us. We can’t do anything about that,” Redman said. “We’re still young. We’re still learning to play football. We might have some juniors out there but they’ve only played football for a one year. I started with 18 kids (in August 2018) and I recruited (many) of these kids in the building to come and play. You can’t expect them to be at the level of these other programs in just one year.”

As of Friday, the combined record of Avon’s first four opponents was 15-2.