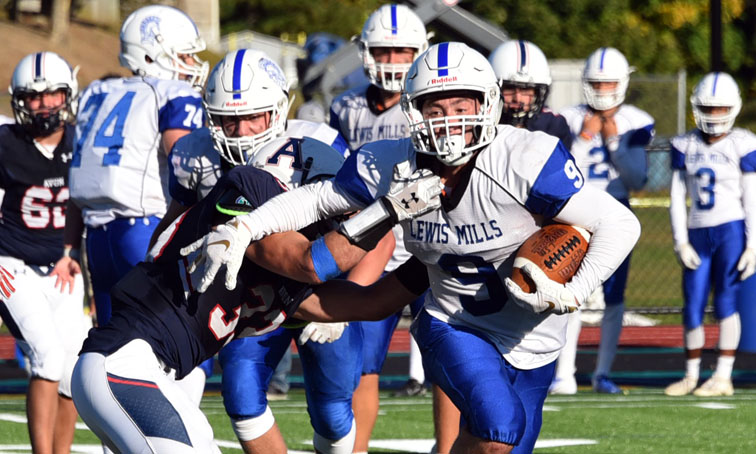 AVON, October 5 – A year ago, the Lewis Mills football team finished their final season in the Pequot Conference with a 0-10 record and on a 13-game losing streak. Only three times in 10 games did the Spartans score more than seven points.

Would joining the CCC and facing larger schools with bigger teams break the program? Not in 2019.

Lewis Mills intercepted two passes, blocked a punt and limited Avon to just 144 yards of offense as the Spartans won their fourth straight game with a 26-7 victory over the Falcons in a CCC Division III East contest on Saturday. Mills has won four straight games for the first time in the program’s 10-year history.

“Going 4-0 feels good after going 0-10 last year. That was tough,” Mills’ second-year coach John Oko said. “But the kids came back with such a great attitude not only this summer but in the off-season and in the spring. They took the bulls by the horn, got motivated, got bigger and stronger and worked.”

Against the Bulkeley co-op, Mills returned an interception for a touchdown and had two safeties. Against Bethel, Mills recovered three fumbles.

Mills led 13-7 in the third quarter when their defense stepped up. Junior Sean Polinsky blocked Kevin Mullaj’s punt and the Spartans took over on the 16-yard line with 18 seconds left in the quarter.

Keeping his legs moving despite getting hit by potential tacklers, Polinsky ran for 14 hard-earned yards to the Avon two-yard line. He scored on the next play to give the Spartans a commanding 19-7 lead.

It was a tough series for Avon, who twice stopped Mills deep in Falcon territory.

Mills’ first possession of the third quarter began on the Avon 10-yard line after punter Kevin Mullaj was tackled trying to punt. The snap from center sailed over Mullaj’s head and he recovered the ball for a 27-yard loss on the Avon 10.

On fourth down-and-goal from the four, Mills QB Colby Nordstrom completed a pass to Tyler Kolenda but he lost a yard when Avon’s Sean Nolan had a solo tackle to stop the drive.

Avon didn’t go far with their offense. They gained two yards on two plays before Francisco Longo threw an interception and Mills had the ball on the Avon 25-yard line. Three straight incomplete passes stopped the Spartans.

On their next series, the Falcons gained just two yards before Mullaj’s punt was blocked, leading to Mills’ taking a 19-7 lead.

“We gave them a lot of opportunities out there,” Avon High coach Jeff Redman said. “We gave them the ball with good field position (due to mistakes). We had two (good defensive) stands (in the third quarter). Our heart is there. It is just our maturity and physical maturity that is not there sometimes.”

On Avon’s opening drive of the second half, Avon was called for holding twice and had a 10-yard loss when the snap from center sailed over the quarterback’s head, along with the 27-yard loss on the punt.

Mills took a 7-0 lead on a five-yard run from Josh Martinotti with 4:37 remaining in the first quarter. Playing defensive back, Nordstrom intercepted Avon QB Tabor Engle and returned the ball 25 yards to the five-yard line. Martinotti scored on the next play.

Mills’ defense set up a second score for the Spartans. Deep in their own territory, Avon’s Quandrell Stewart was stopped for a seven-yard loss back to the Avon 14-yard line. On third down, Polinsky sacked Engle for a nine-yard loss. Engle got rid of the ball just before he hit the turf and was penalized for intentional grounding.

Punting out of his end zone, Mullaj got the ball away but Mills Mark Codinha returned the ball 20 yards to the Avon 12-yard line. On fourth down and six, Cade Cormier fought his way to the one-yard line to keep the drive alive. Martinotti scored on the next play for a 13-0 lead with 6:46 left in the first half.

Avon responded with an eight-play, 75-yard drive that ended with Aaron Baldof recovering a fumble in the end zone. Longo ran two yards but fumbled when he was hit on the goal line. Baldof outfought a Mills defender for the ball and touchdown. Mullaj’s extra point cut the lead to 13-7 with 3:23 left in the second quarter.

Chris Gens had a 22-yard run on the drive while Longo completed a 22-yard pass to Baldof to the Mills two-yard line. Gens had a team-high 37 yards rushing on five carries.

“We’re just not there yet but we will get there,” Redman said.

Both teams are off next week. Avon returns to action on October 19 when they host the Bulkeley co-op here in Avon at 1 p.m.

Mills will host Berlin (3-1, 2-0 CCC Div. III East) on Saturday, October 19 in Burlington at noon. The winner will have command of the race for the division title. Berlin has won four of the last five CCC Division III East titles, including the last three. The Redcoats went to the CIAC Class M playoffs a year ago and advanced to the semifinals.

“We set our goals this season. They were to have a winning season, win the division and our kids want to go to the playoffs,” Oko said. “I’m not going to tell them they can’t. I look at the teams (we play) on film and there are a lot of teams that we are right there with. So, it will depend on how well we play.”

Polinsky rushed for a game-high 86 yards on 11 carries for Mills while Cormier ran for 69 yards on eight carries. Martinotti scored three touchdowns and ran for 27 yards on 12 carries.

Canton remains undefeated in NCCC with wins over Rockville, Bolton

Canton clamps down on Stafford for dominating opening day victory