Mystics rally around their injured star, beat Sun, move one win away from title

Connecticut’s Jonquel Jones drives to the basket in Sunday’s WNBA championship series game as Washington’s LaToya Sanders (30) and Elena Delle Donne try to stop her. The Mystics won 94-81 to take a 2-1 lead in the series. See more game photos.

UNCASVILLE, October 6 – Washington’s Elena Della Donne was the MVP of the 2019 WNBA season leading her Mystics to their second straight WNBA final. But Della Donne played just a few minutes in a game two loss to the Connecticut Sun last Tuesday due to back spasms.

Della Donne has a herniated disk that is pinching on a nerve – a painful injury any person, never mind a 6-foot-5 forward who physically fights for rebounds and position in a professional basketball game.

But Sunday afternoon, Della Donne started and played 26 minutes for the Mystics, primarily on the perimeter. She didn’t battle with Connecticut’s 6-foot-6 Jonquel Jones in the low post. She left that to her teammates who had her back – excuse the pun.

Emma Meesseman came off the bench and scored a team-high 21 points while guard Nastasha Cloud scored 19 points and help shut down Connecticut’s high-scoring guard Courtney Williams to lead the Mystics to a 94-81 victory over Connecticut in game three of the WNBA finals Sunday before a sellout crowd of 9,170 at the Mohegan Sun Arena.

With the win, the Mystics move within one victory of their first-ever WNBA championship with a 2-1 lead in the best-of-5 series. They can win it on Tuesday night in game four at the Mohegan Sun Arena beginning at 7 p.m. The Sun hope to win game four and forcing a deciding game five in Washington on Thursday night.

Kristi Toliver had 20 points for the Mystics, hitting 7-of-9 shots from the field and dishing out 10 assists. Della Donne scored 13 points primarily on long range jumpers. She was 3-of-4 from three-point range. But she did drive to the basket to score with 3:02 left in the game to snuff out a Sun rally that had cut the lead to 10 points.

Washington tied a WNBA finals record by sinking 16 three-point shots. Meesseman, a 6-foot-4 forward from Belgium, drained three consecutive three-pointers from the same spot on the floor as the Mystics turned an 11-point lead into a 20-point lead in the matter of 2½ minutes.

“We got a lot of great contributions,” Thibault said. “I mean, you see Kristi [Toliver] struggle the other day and today she pays it back. And Emma [Meesseman] comes in off the bench. And Elena [Delle Donne] did what she could.

“It was a great, great team effort — the things that we made a priority going into this game I thought we did a pretty good job of, particularly rebounding, taking care of the ball and making it tough for their best players to get good looks,” he said.

In game two, the Sun dominated on the glass with numerous second chance opportunities. It didn’t happen in game three for Connecticut, which was outrebounded 34-27. Washington held a 20-7 edge rebounding when the Sun were shooting.

“The problem (in game 2) was defensive rebounding,” Toliver said. “So we took pride in the fact that we were willing to do whatever it took. We were finding bodies. We were pursuing the basketball. We were gang rebounding. A.P. [Aerial Powers] was flying all over the place. (Natascha Cloud) did her defensive thing (on Courtney Williams). She’s one of the best defensive players in the league. So, yeah, it was going to take a collective effort.”

Added Della Donne, “I know I’ve got a phenomenal team. They’ve carried me this whole series, and they’re going to carry me the rest of the way.” 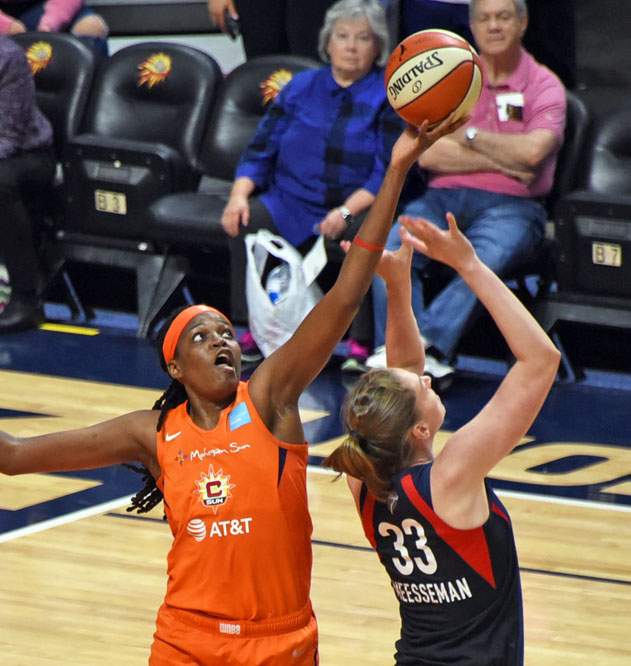 Williams, who had 26 and 22 points, respectively in the first two games of the series, was held to six points on 2-of-9 shooting from the field.

Washington used a 12-0 run late in the first quarter to open up a 17-point lead and never trailed again. Connecticut threatened to tie the game in the third quarter but each time, the Mystics responded. When the score was trimmed to one after a three-point shot from Stricklen, it was Ariel Atkins with a 17-foot shot to extend the lead three.

“I think it is on us,” Connecticut’s Alyssa Thomas said. “We have to control what we can control and that’s our energy. At times, we didn’t bring our energy. If things aren’t going our way, we stopped and didn’t play defense and we can’t do that.

“If shots aren’t falling, you have to find another way to contribute and that is on the defensive end.”

Connecticut nearly caught the Mystics at the end of the second quarter. Trailing by 14 points, the Sun closed out the quarter with a 12-2 surge in the final 2:32 with five points each from Jasmine Thomas and Stricklen (each drained a three-pointer in the run) and Jones scoring a cutting layup to the basket.

Jones had three rebounds in the run while the Mystics missed five of their final six shots of the half. Toliver’s floating shot at the buzzer gave Washington a 43-39 halftime lead.

Meesseman was outstanding all game long. The capacity crowd at Mohegan Sun Arena groaned when she hit a third consecutive three-point shot with 8:23 remaining in the game to give the Mystics a 17-point lead.

“Emma was a monster. She was on the attack,” Delle Donne said. “So confident. Emma is such a good player, and we need her to just continue to attack because no one can guard her one-on-one. She requires double teams, triple teams to be guarded.

“She’s been huge this entire playoffs,” Delle Donne said. “I say it all the time, Emma is one of the greatest in the world. Her play overseas, what she does for her (Belgium) national team, she’s ready for this moment. And you can tell she’s relishing in this moment.”

NOTES: Stricklen’s 16 points was a playoff career high for her. … Washington tied a WNBA finals record with 16 three-point shots. Phoenix also sank 16 three-point shots in a game over the Detroit Shock in 2007. … Delle Donne was a unanimous selection to the All-WNBA team as voted on by a national panel of sportswriters and broadcasters, the league announced Sunday. Chicago’s Courtney Vandersloot, Phoenix’s Brittney Griner, Los Angeles’ Chelsea Gray and Seattle’s Natasha Howard were named to the first time. … Connecticut’s Jonquel Jones led the second team that also included Los Angeles’ Nneka Ogwumike, Las Vegas’ Liz Cambage, Chicago’s Diamond DeShields and Minnesota’s Odyssey Sims. … Delle Donne stood behind the bench when she wasn’t playing. She gets very stiff once she sits down. … Delle Donne decided about 30 minutes before the game she would give it a try. She was taking shots about an hour before the game. “Basically the plan was let’s see how it goes, sub for her every four, five minutes to try to get her a breather because I didn’t think her wind was going to be there, get her back on the bike, or walk in the back hallway while she got her breath back,” Thibault said. … It was the first WNBA finals game in Connecticut since 2005 — a 77-70 win over overtime over the Sacramento Monarchs