SOUTHINGTON, Nov. 1 –There was a tremendous amount of excitement in Simsbury with the undefeated Trojan football team coming to Southington with the CCC Division I West title on the line.

The Trojans came into the game on an 11-game winning streak with six consecutive wins to begin the season – their best start to a season since 2002 — while Southington was 5-1, having lost to No. 3 Darien in week two.

No. 8 Southington showed Friday night that they are not ready to relinquish the throne. The Blue Knights put an end to Simsbury’s winning streak with a 35-7 victory to win the CCC Division I West championship for the sixth consecutive season.

Junior receiver Jack McManus, who caught just four passes in his career before the game, had six receptions for 144 yards and three touchdowns. Linebacker Billy Carr scored his first rushing touchdown of his career and had two sacks for 14 yards to lead a Blue Knight defense that held Simsbury to just 99 yards of offense.

“They are obviously a good team. They’re 6-0 and they love to run the quarterback (Aiden Boeshans). We did a good job swarming to the ball and gang tackling,” Carr said. “Our team’s mentality to get the ball is unmatched by any other team. We’re a bunch of savages out there and we love to hit guys.”

Simsbury (6-1, 3-1 CCC DIv. I West) was held to 33 yards of offense in the first half and just eight yards in the second quarter.

“That’s a good team (Southington),” Simsbury High coach Dave Masters said. “We didn’t hit on all of our cylinders for sure and we haven’t had a lot of adversity to face in sometime. It took us a while. You have to play your ‘A’ game against a team like this.

“In wins and losses, there are lessons,” he said. “We will learn from this and it was determine how we finish the season.”

Simsbury has three games remaining against Enfield (3-4), Glastonbury (3-4) and Avon (1-6) to close out the regular season. The Trojans are ranked No. 5 in the CIAC’s Class LL playoff ratings. The top eight teams earn a bid to the state tournament.

“We need to be consistent and we will be going forward,” Masters said. “I liked our response after we called a timeout.”

Southington got off to a rousing start. They took the opening kickoff and marched 68 yards in five plays with Carter Uhlman scoring on a 29-yard touchdown reception, catching the ball with one hand over Simsbury’s Dan Sohn.

Simsbury’s Mohammed Haroon blocked the extra point to give Southington a 6-0 lead. But then, the Knights tried an onside kick on the kickoff and recovered the ball. Two plays later after Southington QB Brady Lafferty completed an 11-yard pass to Uhlman, Masters called timeout.

Simsbury didn’t give up another first down to Southington in the quarter. 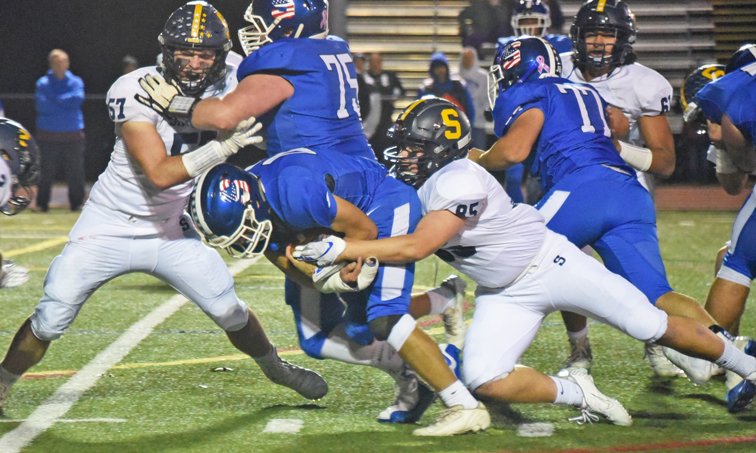 Simsbury’s Michael Schulitz (85) stops Southington’s Dillon Kohl in Friday night’s CCC Division I West contest in Southington as Simsbury teammate Tommy Guilfoyle (57) tries to get in on the action, too.

Late in the first quarter, the Blue Knights forced Simsbury to punt but Southington punt returner Josh Vitti caught the ball at the five-yard line and tried to get upfield. He was hit and fumbled the ball with John Mairano recovering for Simsbury on the five-yard line.

Boeshans bounced off a Southington defender and scored from four yards out with 3.6 seconds left in the first half. Caden Lill’s extra point gave Simsbury a 7-6 lead.

Southington took a 14-7 lead on a 1-yard run from Carr on fourth down with 5:12 left in the first half. The Blue Knights marched 69 yards on 16 plays, eating up 6:48 of the quarter. Southington converted twice on third down to keep the drive moving. Lafferty, who completed 16-of-27 passes for 262 yards in the game, completed two to McManus on the drive for 32 yards.

Defensive pressure from Southington forced an interception from Boeshans by Donnel Mackey-Woodson with 1:43 left in the first half. Southington drove to the Simsbury 27-yard line with 20.2 seconds remaining before Lafferty was sacked by Ryan Guilfoyle for a seven-yard loss.

After an incompletion, Southington faced fourth down and 17 from the 34-yard line with five seconds left. Lafferty dropped a 10-yard pass over the middle to McManus, who broke three attempted tackles from Simsbury defenders, scoring on a 34-yard TD reception at time expired.

It was his first career touchdown and his first TD reception to give Southington a 21-7 lead at halftime. “It was kind of a blur,” McManus said. “After I put the first move on the first kid, I can’t remember what happened after that.”

Added Carr, “He was inhaling passes like it was nothing.”

Simsbury looked good on their first drive of the second half. Thanks to a pass interference penalty against Southington, a 13-yard completion from Boeshans to Zack Gilbert and some hard running from Boeshans, the Trojans marched to the Southington 16-yard line before the drive stalled.

Southington responded with a quick and efficient drive to take a 28-7 lead on a 38-yard reception from Lafferty to McManus, who broke two tackles in the secondary to get into the end zone. Dillon Kohl ran for 34 yards on four carries on the seven-play drive.

Simsbury’s next possession ended with Boeshans losing seven yards on a sack from Carr. Southington extended their lead to 35-7 on a 28-yard touchdown pass from Lafferty to McManus with 8:58 left in the contest.

NOTES: Since 1971, Southington has won 17 of the last 18 games between the schools. The Trojans last beat Southington in 2009 when they prevailed 29-26 in a season when they captured their most recent league championship in the CCC Division I. … Simsbury hosts Enfield at Holden Field on Friday night beginning at 7 p.m.