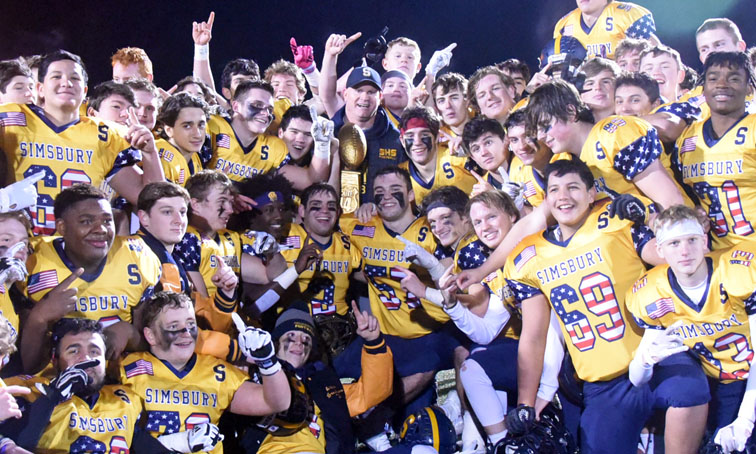 SIMSBURY, Nov. 26 – Simsbury High coach Dave Masters was shivering but smiling Tuesday night at Holden Field. His Trojan football team celebrated winning the Valley Gridiron Classic and winning their ninth game of the season by pouring a large, ice-cold bucket of water over the shoulders of the fifth-year head coach.

Simsbury quarterback Aiden Boeshans tied a school record with five touchdown passes as the Trojans (9-1) overwhelmed Avon, 47-10, in the fifth annual Valley Gridiron Classic. With their best regular season record since 2009, the Trojans are heading to the CIAC’s Class LL tournament that begins on Tuesday, December 3.

It’s been a long journey since Master’s first season in 2015 when the Trojans were 1-9, a team with few players that lost big to Avon in the initial Valley Gridiron Classic, 55-26.

Simsbury was just too much for Avon (2-8), a team that is continuing to rebuild. A year ago, the Falcons began the season with 18 players at their first practice of the season and got through a 2-8 campaign. This fall, the Falcons had more players on the sideline and were stronger but still found wins hard to get.

“We competed with a superior team in all ways the best we could,” Avon coach Jeff Redman said. “We found some weaknesses and exposed it a couple of times. But they have a very, very strong team. I am proud of my kids. We’ve got 55 kids and they have 140.”

It’s probably not 140 kids but Simsbury has sideline full of players this year and three healthy programs at the varsity, junior varsity and freshman level.

It was a fine evening for the Trojans. Simsbury intercepted Avon sophomore QB Tabor Engle three times, had 10 tackles for a loss or a sack and limited the Falcons to just 32 yards on the ground. Dan Sohn had two interceptions and dropped a potential third interception in the second quarter.

Offensively, Boeshans tied a single game school record with five touchdown passes including two each to Jeffrey Coleman (6 receptions, 70 yards) and Zack Gilbert (4-77), who has six TD receptions in the last three games.

“He gives out offense a huge boost (with) lots of energy from him,” Masters said regarding Gilbert. “He is sure-handed with the football.”

After blocking an Avon punt, it took Simsbury four plays to extend the lead to 28-0 on a 21-yard pass from Boeshans to Coleman, who took a short pass across the middle and weaved through defenders and into the end zone.

Brendan Gaffney caught his first touchdown pass of the season on a nice fade pass at the one-yard line and he tumbled into the end zone with a 37-yard reception and a 34-0 lead for the Trojans.

Avon got on the board with a 33-yard field goal from Kevin Mullaj with 2:13 left in the second quarter. Engle completed a 24-yard pass to Aaron Baldof that put Avon into Simsbury territory for the first time. Two plays later, the drive was helped by a 15-yard personal foul penalty for a late hit.

It was Mullaj’s third field goal of the season and it is just the ninth time in Avon football history that a kicker has converted on three or more field goals in a season.

Simsbury marched 69 yards in seven plays in just 1:13 with Boeshans throwing a five-yard TD pass to Coleman with 52 seconds left in the first half for a 41-3 lead.

Redman cited the play of Francisco Longo at linebacker and said that Engle did the best he could under some relentless Simsbury defense. Injuries have depleted Avon’s offensive line as the season has gone on. “Tabor was definitely under some heat,” he said. “We were down linemen. We have had two broken legs and two (injured) shoulders (taking players off the field). The kids that stepped in did the best job they could.”

Simsbury now awaits their opponent in the Class LL tournament. The Trojans are currently the No. 5 seed but could move up as high as four and earn the right to host a quarterfinal game. Those pairings should be available after Thursday’s Thanksgiving Day contests.

NOTES: Simsbury leads the Valley Gridiron Classic series, 4-1. The Trojans lead the overall series between the two schools that began in 1961 by a 9-5 margin. … Simsbury’s Zack Gilbert has caught 10 touchdown passes, which is two shy of the single season record of 12 set by John Coleman in 1968. … The last time that Simsbury went to the CIAC playoffs was in 2009 when the Trojans were 9-1 in the regular season. …  This will be Simsbury’s fifth trip to the playoffs. The Trojans qualified in 1993 and 1994 when it was just the top two teams earning playoff berths and in 2008 and 2009 when the top four teams qualified.

Simsbury head coach gets a celebratory dunking after Tuesday night’s 47-10 win over Avon that improved his Trojans to 9-1 on the year. (Photo courtesy Simsbury football) More game photos

Avon Board of Finance unanimously passes budget with no tax increase