Canton’s Max Sparks (499) won the O’Briley Turkey Trot for the second straight year with a course record time. More photos from the race

CANTON, November 28 – Canton’s Max Sparks needed a good hard workout this week while at home from the University of Lynchburg in Lynchburg, Virgina.

A hard run at the eighth annual O’Briley Turkey Trot was enough for Sparks, who won his second consecutive Turkey Trot with a course record time of 15:45.5 over the 3.1 mile course Thursday morning on the Farmington River Trail.

“I come home for Thanksgiving,” Sparks said after his 13 seconds win over Bristol’s Chris LeBeau, a runner at Southern Connecticut State. “This is my workout for the week. My coach (University of Lynchburg Jake Reed) is onboard with it.”

Sparks won the race by 44 seconds and snapped the course record set in 2017 by Bristol’s Spencer Johnson in 16:29.

On the women’s side, Canton High junior Julia Caputo won the race in her first appearance in the race with a solid 60-second win over Genna Primeau of Derby, Vermont. Caputo finished the race in 19:56.6. Long-time area runner Mary Lynn Currier, who currently lives in Buzzards Bay, Mass., was third with a time of 21:07.

“It was a smooth,” Caputo said. “It was a flat course. That is different to what I am used to in cross country.” 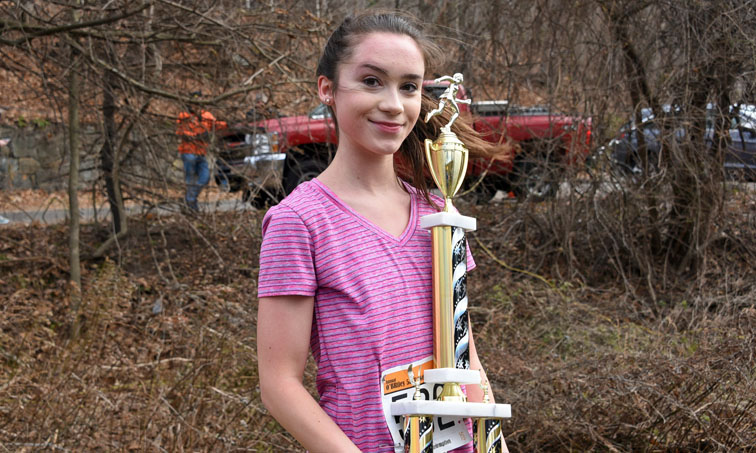 Caputo had a strong season with the Canton High girls cross country team, finishing second at the North Central Connecticut Conference meet, took fourth at the CIAC’s Class SS championship meet and became the first Canton High girl to ever qualify for the New England championship with a 15th place finish at the State Open.

Sparks had a stellar sophomore season at Lynchburg. He won the Old Dominion Athletic Conference (ODAC) championship meet and was named men’s cross country runner of the year in the conference. He won the league meet with a time of 24:44.1 for 8 kilometers (4.9 miles), less than a second off the program record set by former national champion Ricky Flynn.

Sparks finished 138th place in a talented NCAA Division III championship field running in muddy conditions. A year ago, he was 172nd in bitter cold temperatures.

Bristol’s Chris LeBeau, who competes at Southern Connecticut State, became the second runner in race history to run the course in under 16 minutes with a time of 15:58.

In third place was former Lewis Mills’ runner Nicholas O’Brien of Burlington, a junior who runs for the University of Hartford, with a time of 16:06. He had a personal best in the 10K at the NCAA Division I Northeast Regional with a time of 34:00.3 in early November. 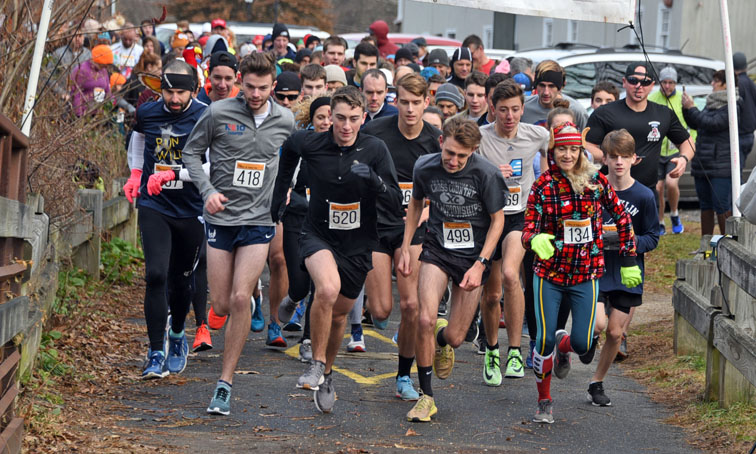 A record 357 runners finished this year’s O’Briley Turkey Trot in Canton. Races take off at the start and the field was so deep that it took one minute and 40 seconds for all the runners to cross the start line. More photos from the race

The race had a record field of more than 350 runners that completed the course. There was so many runners on the trail that it took the entire field more than one minute and 40 seconds to cross the starting line.

Primeau was visiting family for the holiday in Granville, Mass., which is just north of Granby. She was looking for a local race to run in. “It was fun,” she said. “It was an easy out and back in. I like it when you can see everyone and high five people.”

Barkhamsted’s Heather Francis got some friends to join her on the run in Collinsville. Francis used to race at the legendary Manchester Road Race. “It got way too big. It was elbow-to-elbow (tight) throughout the race.”

Proceeds from this year’s race are going to the St. Jude Children’s Research Hospital along with a $500 donation to the Canton Food Bank.

“This fun run has turned into a very nice event for charities,” race co-founder and co-race director Colin O’Brien said.

In the previous seven years, the race has donated more than $53,000 to various charities within the greater Hartford area.

Some runners had plenty of fun with their costumes during Thursday’s O’Briley Turkey Trot road race in Collinsville. More photos from the race

**Course shortened due to weather for safety reasons