Granby/Canton to challenge No. 2 Waterford in Class M playoffs 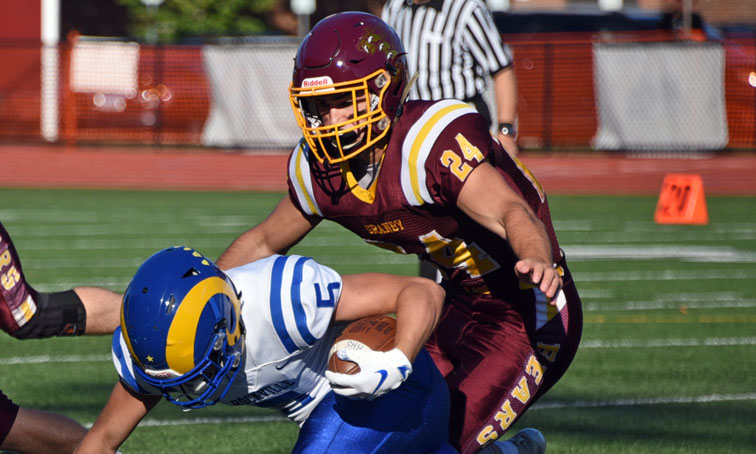 Granby/Canton’s Sam Attianese has been a force on both sides of the ball this fall for the Bears.

A year ago, the Granby Memorial football team closed out the 2018 football campaign on a snowy field in Canton with a victory and a 7-3 record – one win shy of earning a spot in the Class S state tournament.

Their opponent, Canton, was on the short end of another defeat and a 1-9 record.

After a 43-year absence, football returned to Canton in 2007, thanks to efforts of parents and Friends of Canton Football. But even during a three-year span (2012-14) when the Warriors won 24 games under head coach Paul Philippon and went to the Class S playoffs, the team struggled with low numbers. In that championship season of 2014, Canton went 10-2 and won the Pequot Conference Uncas Division title with just 27 players in uniform.

Granby finished the 2018 season with 31 players. Canton had 32. The two agreed to form a co-op team last spring. “Student safety was the No. 1 reason the administration wanted to pursue a co-op program,” Canton Superintendent Kevin Case said last spring.

Now, together, they’re going to the Class M playoffs.

Granby/Canton (8-2, 8-2 Pequot Conference) will be traveling to Waterford on Tuesday night in the Class M quarterfinals to face the No. 2 Lancers at 6:30 p.m. It’s the second CIAC tournament appearance for the Bears, who last qualified in 2015.

The Bears returned some talented players from last year’s team such as quarterback Jackson Rome, all-purpose back Samuel Attianese and linebacker Simon Matthews. The addition of 20 players from Canton provided added competition for playing time and depth that neither program had a year earlier. 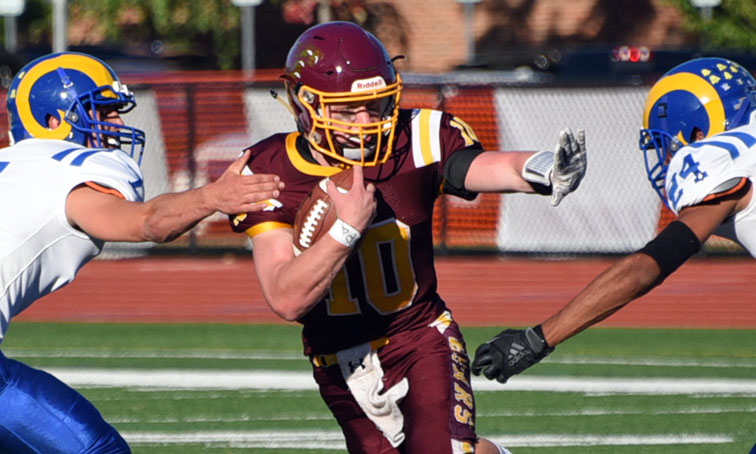 Granby/Canton QB Jackson Rome is the leading rusher for the Bears and has thrown 18 TD passes this fall.

Granby/Canton opened the season with a thrilling 27-26 decision in overtime over Stafford/East Windsor/Somers and a win over Ellington before dropping a hard-fought 14-7 double OT loss to eventual Pequot Conference champion Rockville, 14-7.

But the Bears won six of their final seven games to secure the tournament berth.

Rome has been the catalyst offensively. He has rushed for a team-leading 1,152 yards and 18 touchdowns on 143 carries. He has completed 55-of-90 passes for 786 yards, five TDs and six interceptions.

Defensively, the Bears have forced 27 turnovers in 10 games – 19 interceptions and 12 fumbles. Simon Matthews, Makin, Sam Schock and Attianese have three each. Attianese is the team’s leading tackler with 67 tackles and two fumble recoveries.

Sophomore Malik Brown Smith has 63 tackles and two sacks while Donte’l Williams had 61 and a team-leading 3½ sacks. Matthews has 53 tackles.

“It was great on how the kids came together,” Shortell said. “We’re a team now. It doesn’t matter what town the kids came from what we did in previous years. They just gelled. It is on them for doing for their jobs and doing them well.”

Bakken is a three-sport star at Waterford. He is a guard on the basketball team that beat New Britain for the Division II title last March and is an infielder on the baseball team that beat Berlin, 1-0, for the Class L title in June. According to Mike DiMauro of the New London Day, Waterford has the opportunity to become the first school in CIAC history to win basketball, baseball and football titles in the same calendar year.

Christian Hightowner is Waterford’s leading rusher with 514 yards and three TDs on 91 carries while Jackson Harshnberger has rushed for 5 TDs and 417 yards on 90 carries.

Granby/Canton (8-2) at Waterford (9-1)
At Waterford
Date: Tuesday, Dec. 2, 6:30 p.m., Waterford High field
Series: First meeting
Of note: Someone will walk away from this game with their first-ever CIAC tournament win. Waterford is 0-2 in two appearances while Granby lost their lone appearance to Seymour in 2015. Canton lost to Capital Prep/Achievement First in their only tournament appearance in 2014.