Canton fans race across the court to celebrate with the Warriors after Canton won their first-ever conference tournament title Friday night with a win over Granby. More photos from the game.

CANTON, March 6, 2020 – The Canton High gym was loud and full on Friday night for the North Central Connecticut Conference tournament championship game. For the first time in a long time, all four bleachers were pulled out for spectators and they were full.

Boisterous fans from Canton and rival Granby each filled a section of the bleachers and neither was shy about rooting on their classmates.

“It was amazing,” Granby coach Walter Hansen said. “I couldn’t wait to get here because I knew all four sets of bleachers would be out. I knew it would be loud, intense and fans were on top of us. No could hear me but this is what it is about. This is what you try to get to in the post season.”

And they saw an wildly entertaining contest. Granby cut Canton’s lead to two points with 43.8 seconds remaining but the Warriors sank five of eight free throws in the final 22.8 seconds to lift Canton to a 56-49 victory and their first-ever conference tournament title.

Canton (21-2) had fallen short in their first four appearances in the NCCC Tournament final, including a heartbreaking loss to East Windsor on a 30-foot shot at the buzzer that banked in off the backboard in 2016. In their history that dates back nearly 100 years, the Warriors have won two state championships but have never captured a conference tournament.

“In 2016, we lost to East Windsor on a half-court shot at the buzzer,” Canton High coach Craig Archambault said. “It told these kids to play for everyone in the past. For every guy who almost got there. We’re at home and this is our night.”

As when the final seconds ticked off the clock, the Canton players celebrated at midcourt joined by dozens of their fellow classmates who swarmed out of the stands.

Canton’s Josh Burke led all scorers with 21 points, including four 3-point shots, with Matt Rose getting 14 hard-earned points in the paint. Jack Rose had nine points and pulled down some key rebounds.

All-NCCC forward Rowan Heinze led the Bears with 17 points, scoring 11 points in the second half as he tried to keep his team in the game. Joshua Brown added 11 for the Bears (14-9).

“We put ourselves in a position to win but in the end, they made a few more plays than we did,” Hansen said. “(Canton) has a lot of weapons. (Matt) Rose is so tough inside. He is unselfish, knows where to pick his spots and his post moves are fantastic. Burke made some tough (three-point shots).”

It was the most points in a game for Burke since he had a career-high 28 points in a win over HMTCA in late January.

Lost amid the celebration was a solid defensive effort by the Warriors that including pulling down key rebounds.

“That is something we pride ourselves on and is one of the most underrated parts of our game,” Burke said. “At lot of people like to look at our shooting, our stats and our record but don’t look at the work we put in day in and day out. We pride ourselves on our defense.” 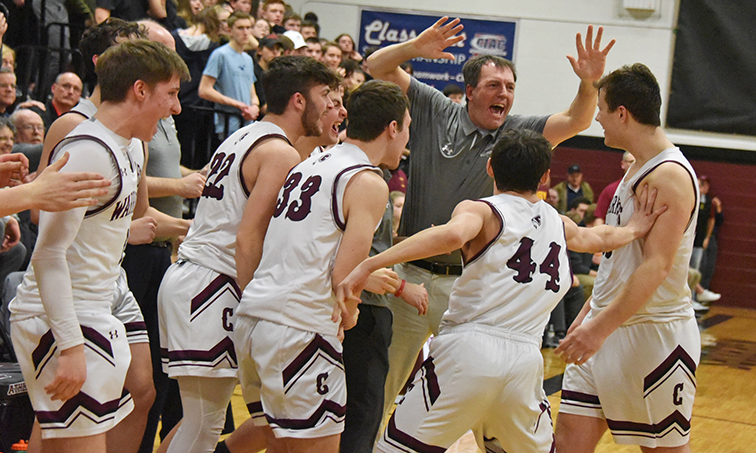 The Warriors celebrate after Matt Rose, far right, pulled down a crucial rebound in the fourth quarter of Canton’s win over Granby in the NCCC championship game. More photos from the game.

Leading by two points with 22.8 seconds remaining, Burke hit a free throw to push the lead to three, 52-49. Burke’s second shot rolled off the rim but it was Jack Rose who outfought Heinze for the rebound and four seconds later, Burke was on the free throw line again.

Burke sank both free throws with 18.3 seconds left to push the lead to five points, 54-49.

“Rebounding was key,” Archambault said. “We didn’t give up too many second chances and that was huge.”

The Warriors were hosting the championship game thanks to outstanding semifinal performances by both teams. No. 3 Canton played solid defense to beat No. 2 Somers while No. 4 Granby upset league champion SMSA on Tuesday.

In the title game, the Bears had a one-point lead, 16-15, early in the second quarter when Justin Phillips a hit a three-point shot. Granby converted on eight 3-point shots in the contest.

But Canton used a 10-0 surge to take the lead for good.

Granby’s Rowan Heinze tries to pull down a rebound in Friday night’s NCCC championship game in Canton. More photos from the game.

Granby would cut the Canton lead throughout the game but couldn’t regain the lead again.

The Bears used an 8-2 run to cut the lead to three points with 1:35 left in the second quarter sparked by another three-point shot from Phillips and a nice drive to the basket from Brown. A basket from Heinze with 58 seconds left in the first half cut Canton’s halftime lead to four points, 30-26.

In the third quarter, Burke hit two three-point shots in the first two minutes of the half to allow the Warrior lead to grow to eight.

Canton led by seven early in the fourth quarter before Granby again trimmed the lead. Heinze scored between two defenders to reduce the lead to five and after a steal by Phillips, Brown sank a three-point shot with 6:14 remaining to cut the Canton lead to two, 45-43.

The two teams played hard. Heinze was wide open at the top of the key for a three-point shot with 3:40 remaining but he missed and it was Jack Rose who pulled down the rebound.

The gym was packed for Friday night’s NCCC Tournament final against Granby. More photos from the game.

But Granby – the defending NCCC Tournament champion who went to the CIAC Division IV finals a year ago – wouldn’t quit. John Bell drove to the basket with 1:41 remaining to cut the lead to five.

Tenczar missed on the front end of a one-and-one free throw opportunity with 1:10 remaining and it was Heinze who hit a three-point shot with 43.8 seconds left to cut the lead to two, 51-49.

“I thought it was a pretty good game,” Hansen said. “Guys were playing really really hard and trying to win the game.”

Matt Rose was named to the All-Tournament team and named the most valuable player of the tournament.

“We came into this game knowing nothing was going to stop us from coming out with a win,” he said. “Before the game we had a players-only (meeting). We told each other that we loved each other no matter what. We just had to work on our 2-3 zone (defensively). We had an emphasis on finding people and boxing out (to get rebounds).”

After the gym cleared out and most of the fans had left, the Warriors were still together with their families. A tall ladder was brought into the gym and each of the Warriors were able to cut down the nets. Each player got a snippet of the net to take to take home with them — a perfect end to a historic and satisfying evening.

Chris Tenczar holds the net after Friday night’s win over Granby in the NCCC Tournament title game. More photos from the game.

NOTES: Canton was 0-4 for the finals of the NCCC Tournament before Friday. Not only did they lose to East Windsor in 2016 on that buzzer-beating shot but they lost to Avon in 2009. In that year, Canton went 19-1 in regular season with their lone defeat coming to the Falcons. Canton also lost in the NCCC finals to Windsor Locks (1996) and Suffield (1985).

It was the third game of the year between Granby and Canton. Granby won the first game on January 24, 58-53 on their home floor, snapping Canton’s 11-game season-opening winning streak. In game two, the Warriors beat the Bears on February 13 in Canton, 60-51. The two teams could meet for a fourth time if both teams reach the CIAC Division IV tournament championship game. The Bears are seeded 10th and in the opposite bracket of the Warriors.

Canton is the top seed in the upcoming Division IV tournament with their 18-2 record. They will play the winner of Tuesday night’s first round game between No. 16 Ansonia (12-8) and No. 17 Academy of Aerospace and Engineering-Windsor (12-8) on Thursday at 6:30 p.m. in Canton. Granby hosts Wilby (9-11) in a first round game on Tuesday.