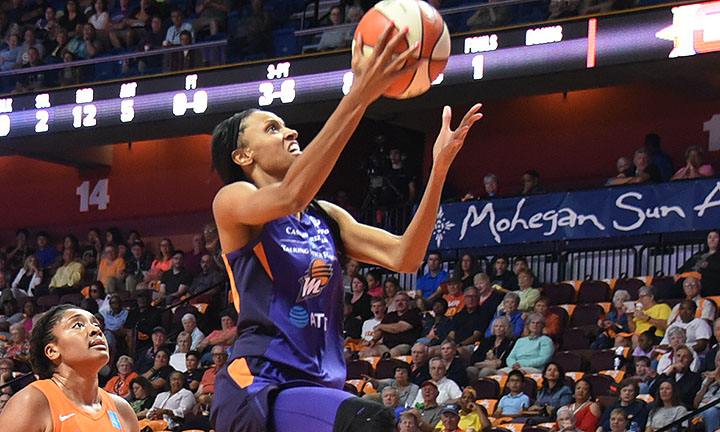 The Sun made two selections in Friday night’s WNBA draft but the big move of the off-season was getting three-time WNBA All-Star DeWanna Bonner from Phoenix in a blockbuster move in February.

It has been a busy offseason for the Connecticut Sun, who fell one game short of winning their first WNBA title in September when they lost game 5 of the WNBA championship series to the Washington Mystics.

However, All-Star forward Jonquel Jones signed a new multi-year deal with Connecticut while New Haven native Bria Holmes and rookie Natisha Hiedemann signed contracts with the Sun. Starters Alyssa Thomas and Jasmine Thomas will be back.

It could be tough to earn a spot on this roster but Connecticut coach Curt Miller is thrilled with the two selections that the Sun made in Friday night’s virtual WNBA draft to the COVID-19 coronavirus. The Sun didn’t have a first-round selection – they sent a pair of first round selections to Phoenix to get Bonner.

Connecticut selected Maryland’s Kaila Charles late in the second round with the 23rd selection in the draft. They added Juicy Landrum, a 5-foot-8 guard out of Baylor, with their third round pick, which was the 35th overall.

Kaila Charles of Maryland was the Sun’s first pick in the WNBA draft in the second round. (Photo courtesy University of Maryland)

Charles was a three-time All-Big 10 selection and Miller said that the Sun consistently had Charles among their top 10 players in the draft. “For her to slip down to us was almost unbelievable for us,” he said from his home in Indiana. “We were fortunate to be in a position to draft Kaila.”

Miller likes Charles’ versatility and her ability to play in a fast-tempo offense. “She has the confidence to go at the bigger players and the confidence and skill to dominate other players,” he said. “I love her touch around the basket.”

Charles led Maryland in scoring this year, averaging 14.3 points and 7.3 rebounds a game, helping the Terps win their fifth Big 10 title in six years. Maryland ended the season on a 17-game winning streak. Miller thinks Charles may have slipped in the draft because she hasn’t made a lot of three-point shots but he is optimistic because “her mechanics are there.”

The Sun had thoughts of selecting Landrum with their second round pick but that changed when Charles was available. Connecticut was thrilled that Landrum was still available in the third round. The Sun were impressed with her shooting ability. Landrum did set a new Big 12 record with 14 three-point shots in a game against Arkansas State last December.

While Charles or Landrum may make the team and may contribute, the Sun picked up immediate help in their quest for the franchise’s first WNBA championship in February when they acquired Bonner, January and Mosqueda-Lewis.

“We love our pieces,” Miller said last night. “We have the talent to be in the discussion to be one of those teams to make a run for a championship.”

“Connecticut has such a talented roster. I watched them get so close to winning a championship last season and was just really impressed with how hard they played. You could see how well they gelled on the court. I love their style of play and thought my game would be a good fit in their system,” said Bonner, who helped Phoenix win WNBA titles in 2009 and 2014.

With Jones and Alyssa Thomas, Bonner will give Connecticut a formidable frontcourt trio.

“(Jones) is an amazing player. To be her size and step out and hit the three like she does. She’s such a tough match-up,” Bonner said last month. “And there is no one like AT (Alyssa Thomas). When she grabs a rebound and takes off, it’s like a train coming at you. I’m glad to finally be on the other side of that.”

“(Jasmine Thomas) doesn’t get the recognition she deserves. I would say she’s the best defensive point guard in the league and has become a scary offensive threat as well,” said Bonner. “Bria (Holmes) really came on too. I know what it’s like coming back after taking a year off to have a baby. What she did was impressive and I think she’ll take another step forward this year for us. And being reunited with Bri (January) was an unexpected surprise. She’s such a fierce competitor.”

January’s trade to Connecticut was part of a three-team deal that saw fan favorite Courtney Williams go to Atlanta. Sun officials said that Williams didn’t want to stay in Connecticut.

Williams, an energetic guard, averaged 13.2 points, 5.6 rebounds and 3.8 assists a game for the Sun in the regular season last summer. In the playoffs, she was better, averaging 17.9 points, 5.8 rebounds and 4.4 assists.

“We realize Courtney was a fan-favorite and we wish her the best in Atlanta. Unfortunately, despite our best efforts and all the loyalty and support we’ve shown Courtney over the last four seasons, it became clear she no longer wanted to return to Connecticut,” Miller said when the trade was announced in February. “I will look back fondly on the memories we created together, but my focus as always is with the players that have a burning desire to help the Connecticut Sun hang the franchise’s first championship banner.”

January, a 5-foot-8 guard, won a WNBA title with Indiana in 2012. Six times, she has been named to the WNBA All-Defensive team. She has 330 career steals. She is also a solid three-point shooter. She led the league in three-point shooting percentage in 2015 and 2018.

Mosqueda-Lewis, who has been in the league five seasons already, won a WNBA championship with Seattle in 2018. She has primarily come off the bench, starting just nine of 141 career games. She averages 5.3 points a game and sank 28 three-point shots a year ago.

“Our offensive philosophy revolves around spacing with players that can help spread the floor,” Miller said when the trade was announced. “KML is one of the outstanding shooters in our game and will provide an important spark to our offense.”

The Sun sent a second-round pick in 2021 to the Storm for Mosqueda-Lewis.

Other offseason moves included Rachel Banham returning to her home state of Minnesota and the Lynx. The Sun received a second round pick in the 2021 draft. Stricklen signed with Atlanta as a free agent while U.S. national team guard Layshia Clarendon signed with New York as a free agent. Morgan Tuck was also traded to Seattle in early February along with the No. 11 pick in the 2020 WNBA draft for Seattle’s No. 7 pick.

That No. 7 selection was later used about two weeks later in the deal to get Bonner to Connecticut.

When Miller and his staff will get a chance to mold this team together is unknown due to the pandemic. Commissioner Cathy Engelbert said the league is trying to figure this out – just like all of us.

“Our goal is to have a season when it’s medically advisable and feasible,” Engelbert said. “I keep saying that. We continue to scenario plan. Other than deferring training camp and the tip of the season, we haven’t taken any of our other options in our scenario plan off the table. Talking with our owners, players, again, whether it’s with or without fans, whether it’s at a neutral site or multiple sites or back in our arenas. Our goal is to have a season.

“Again, we’re looking at it’s a little bit of a Rubik’s Cube because as you all know, every day there’s emerging information coming out on the situation here by regions and in the U.S. and around the world. Everything is on the table. We could play into the fall for sure, but we’re going to try to get a semblance of a season in this summer into the fall,” she said.