Hartford Athletic return to Dillon for practice with social distance 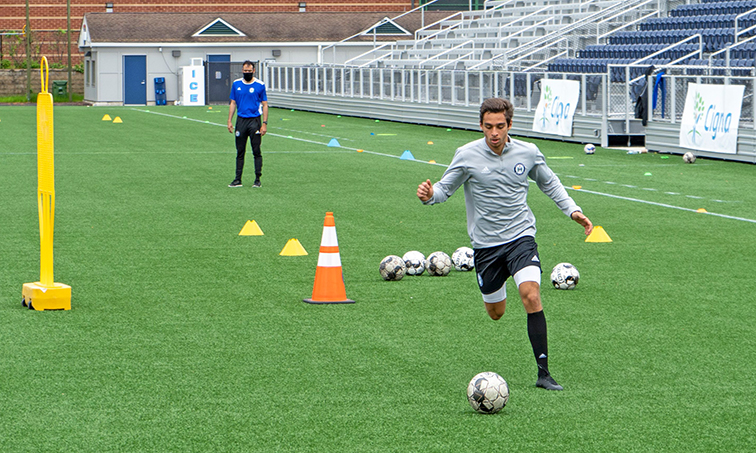 Gabriel Torres of the Hartford Athletic works out at Dillon Stadium last week. The squad has resumed limited workouts in preparation for the 2020 USL Championship season. (Photo courtesy Hartford Athletic)

HARTFORD, May 29 — The Hartford Athletic soccer team was days away from making United Soccer League (USL) Championship debut in March when the season was shut down due to the COVID-19 pandemic.

The Athletic were scheduled to travel to New Jersey to take on the New York Red Bulls II in their 2020 season opener on March 13 under new head coach Radhi Jaidi, who played in two World Cup tournaments for Tunisia in 2002 and 2006.

With players from six countries, the Athletic were looking to improve on last year’s 8-21-5 record that saw Hartford finish virtually at the bottom of the USL Championship’s Eastern Conference. The Athletic finished 17th out of 18 teams and weren’t close to being among the 10 Eastern Conference teams earning a playoff bid.

More than two months later, Hartford has begun to conduct workouts again at Dillon Stadium in Hartford in accordance with USL and state regulations.

“I’m happy with the way the sessions have gone so far,” Jaïdi said. “Social distancing allows us to focus on players’ individual technical (skills). It works to an extent but moving forward, hopefully, we can get more flexibility and the state will allow us to get bigger numbers of players together.”

Midfielder Harry Schwartz, one of eight players back from last year’s team, is thrilled to be back out on the field.

“It feels great to be back out there even though there are some restrictions,” he said. “We can’t play together. But just being back in a Hartford (jersey) and seeing the guys and coaching staff and being able to train at Dillon is definitely great.

“It’s an adjustment,” said Schwartz, who had four goals and three assists in 20 games last summer. “You have to be socially distant and keep your space. But the coaching staff has done a great job of getting the work in and making the most of the time we are together.” 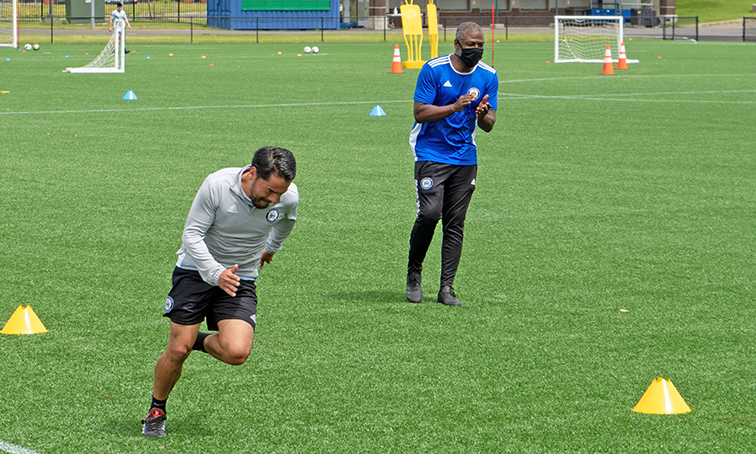 Hartford, one of three USL Championship teams yet to play a game, has missed 11 games so far, including six home games at Dillon Stadium. The original schedule calls for 34 games with regular season games going through October.

There is no word yet on when the USL Championship will resume play, where the games will be played or the schedule for the teams. “The league is exploring different options on how to play the season. The fact we have practiced at Dillion Stadium is a good sign but we don’t have any answers at this time,” team spokesman John Ponziani said.

Still, the Athletic is thrilled to be back training on the plastic grass at Dillon Stadium.

After six weeks of preseason workouts with Hartford, he was pleased with the progress of implementing his detail-oriented system of playing. “We felt comfortable and happy with the way that the players were adapting and adjusting to the way we will play this year,” he said.

The next four games on the original Athletic schedule were a game on Saturday, June 6 at North Carolina; June 13 at home against Tampa Bay at 7 p.m., a June 20 game at Birmingham and a June 25 contest in Hartford at 8 p.m. against St. Louis.