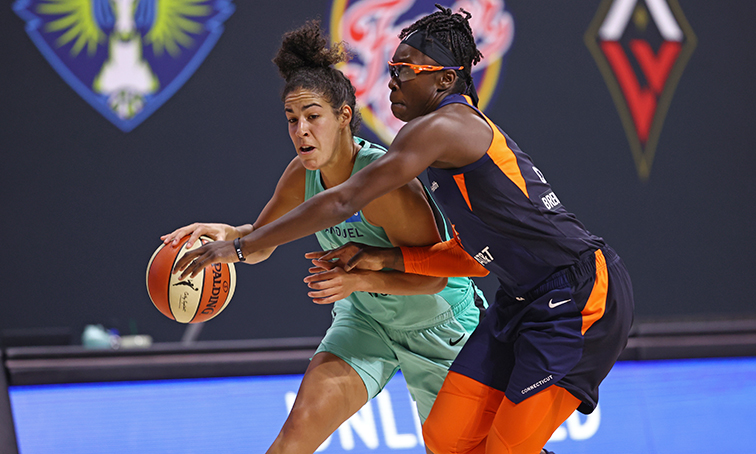 Nearly three weeks ago, the Connecticut Sun were 0-4 with the prospect of one of the most challenging stretches of the season in front of them – 10 games in 19 days.

Thanks to the COVID-19 pandemic, the WNBA season is a 22-game season condensed into a time period of about seven weeks. Ten games in 19 days would leave Connecticut with little to no opportunities to practice, no time to refine their offense and/or defense and few hours between games to recover physically. The WNBA’s other 11 teams have similar runs of consecutive games due to the pandemic.

Connecticut completed their gauntlet on Saturday night with a satisfying 82-65 win over the New York Liberty at the IMG Academy in Bradenton, Florida. The Sun went 6-4 in that 19-day stretch, winning four of five games at one point and three consecutive games to jump right back into playoff contention.

The top eight teams in the WNBA will qualify for the playoffs that begin in September. The Sun are seeded seventh with a 6-8 record. Six of Connecticut’s final eight games are against teams currently seeded sixth or lower, including two games with the Phoenix Mercury (7-8). The Sun face Phoenix on Wednesday night at 10 p.m., on CBS Sports Network.

“We finally get a chance to take a deep breath. We can regroup and get to the practice floor on Tuesday,” Sun head coach and general manager Curt Miller said. “We have to take it one game at a time. Our goal is to scratch and claw (for a playoff berth). We have to take care of business ourselves.”

Connecticut played well defensively to hand the hapless Liberty their 12th loss in 13 games. The Sun scored 33 points off 19 New York turnovers. The Sun had 12 steals and blocked three shots.

The Sun had a whopping 29-4 edge on defensive rebounds. In other words, New York had just four offensive rebounds in the entire game, which vastly reduced second chance opportunities after missed shots.

“I knew this was the last game of a long stretch,” Connecticut’s Alyssa Thomas said. “I just wanted to go out and set the tone.”

Thomas certainly did set the tone for the Sun. She scored Connecticut’s first 10 points of the game and had 18 points at halftime after sinking eight of 10 shots from the floor. She finished with a game-high 25 points, five reports, two assists and two steals.

Jasmine Thomas had 16 points and five assists for the Sun while DeWanna Bonner had 14 points, pulled down a team-high 12 rebounds and had a team-leading six assists. Briann January had 11 points and a season-high six assists for Connecticut.

“She got us going,” Miller said of Alyssa Thomas, who scored more than 20 points for the fourth time this season. “She was truly our engine. We got some pocket passes to her and she really gave us the start we needed and it boosted our confidence. New York is a dangerous team. They have played well against other teams.”

A jumper from Jasmine Thomas gave the Sun a 24-16 lead after one quarter. The Liberty cut the lead to three, 30-27 when New York’s Jazmine Jones sank a pair of free throws. But Jasmine Thomas hit a 14-foot jumper and then stole the ball.

Connecticut led 45-38 at halftime and outscored the Liberty, 15-8 in the first four minutes of the third quarter to built a 12-point lead. The Sun gave up just 11 points in the third quarter.

“Tonight we were able to find some disruption defensively and took advantage of doing a good job in gaps with our hands,” Miller said. “We took it as a challenge to guard their athleticism and (our defense) turned (turnovers) into points.”

The Sun had a season-high 23 assists in the contest.

Despite early deficit, Las Vegas runs away from Connecticut
Connecticut game against Phoenix is among several pro games postponed