As the final minutes ticked off the clock in game 5 of Tuesday night’s WNBA semifinals, the exhaustion was evident. Jump shots bounced off rims, the fast breaks slowed down and the offenses of the Connecticut Sun and Las Vegas Aces struggled under the defensive pressure from their opponents.

Only two field goals were scored in the final 6:56 of a playoff elimination game and just six field goals went through the basket in the fourth quarter.

The top-seeded Las Vegas Aces erased a 16-point deficit and held the Sun to 18 second half points to beat Connecticut, 66-63 at the IMG Academy in Bradenton, Florida, and advance to Friday’s WNBA championship series against the Seattle Storm. The Aces won the final two games of the series, taking the best-of-five series, 3-2.

They advance to the finals for the first time since 2008 when they were the San Antonio Stars. The Sun, who began the season with a 1-6 record, fell one game shy of playing in the WNBA championship series for the second straight season.

“Both teams played so hard. Both are really talented defensive teams,” Sun head coach and general manager Curt Miller said. “You don’t win a lot of basketball games when you shot 25 percent in a half.” 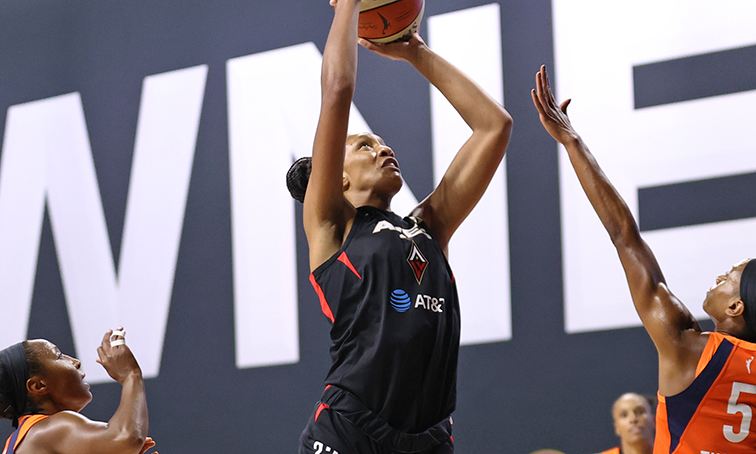 Las Vegas’ A’ja Wilson goes up for the shot in game 5 of Tuesday night’s WNBA semifinal in Florida. The Acers erased a 16-point lead to beat the Sun and win the series, 3-2. (Photo by Stephen Gosling/NBAE via Getty Images)

Jasmine Thomas hit a basket off the backboard with 11 seconds left in the third quarter to give Connecticut a one-point lead after three quarters, 54-53.

It all ground to a halt in the fourth quarter. “It was like playoff overtime basketball,” Aces coach Bill Laimbeer said. “You don’t want to do anything different. We couldn’t figure how to score until A’ja went to the (free throw) line for us. “

Swords grabbed a rebound in the lane and scored with 8:08 left to give the Aces a 57-56 lead. Jasmine Thomas responded with a drive to the basket with 7:57 left, was fouled and hit the free throw to give Connecticut a 59-57 lead.

After a steal from Natasha Hiedman led to a fast break basket from Alyssa Thomas, the Sun lead 61-59 with 6:56 left. Alyssa Thomas scored a one-hander off the glass with 2:40 left to put Connecticut up by one, 63-62 but that was it for the Sun offense.

In the final 6:56 of the game, the Sun made 1-of-11 shots from the floor while Las Vegas missed their final eight field goal attempts.

What was Las Vegas’ mindset in the second half?  “Get a stop. Get a stop. Just find a way,” Aces veteran guard Angel McCoughtry said.

It’s been a long season since the pandemic-shortened WNBA season began in late July. Teams have – in most cases – been playing every other day throughout a 22-game regular season and then the playoffs. It’s no wonder that both teams ran out of gas.

“Our team is hurting right now,” Miller said. “They’re really close. We’ll all look in the mirror and say where could we have stolen a few more points.

“I am really proud. It’s raw right now,” he said. “We really believed in our mind that we could win a championship with the defense in that room. Our offense has been a little chunky (this season). Tonight, it bit us in the second half.”

Bonner finished with 15 points, just five in the second half and pulled down eight rebounds. Brionna Jones, who has played the last month with strained achilles tendons in her feet, had seven points and a team-high 12 rebounds.

Guards Briann January and Jasmine Thomas played solid defense but struggled shooting the ball for the second consecutive game. January, playing with a dislocated finger, scored five points and was 2-of-9 from the floor. Jasmine Thomas scored nine points but was 4-of-15.

McCoughtry, the 34-year-old two-time Olympian, got her second start of the season and scored 20 points. Kayla McBride had 10 points and five rebounds. Swords pulled down 10 rebounds.

Alyssa Thomas was the spark driving the Connecticut engine early. She scored eight of the first 10 points for the Sun. She had four points and Bonner added six as part of a 16-3 run by the Sun to erase a one-point deficit and take a 12-point lead. 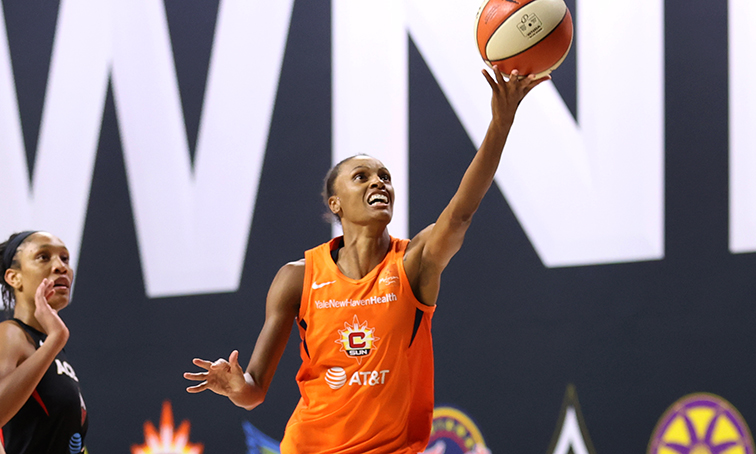 Connecticut’s DeWanna Bonner has the ball roll off her fingers in Tuesday night’s Game 5 loss to Las Vegas in the WNBA semifinals. (Photo by Stephen Gosling/NBAE via Getty Images)

THOMAS HONORED: Sun head coach and general manager Curt Miller has made it quite clear what he thinks of Alyssa Thomas’ ability as a defender. He called her the best defender in the world after game two when the Sun had to play without Thomas, who separated her shoulder.

Thomas was named to the WNBA’s All-Defensive First Team for the first time in her career on Thursday. Voting was conducted by the league’s 12 coaches, who could not vote for a player on their own team.

“I believe she is the best defender in the league right now in terms of her versatility. She can defend any position one (point guard) through five (center),” Miller said earlier in the playoffs after the Sun eliminated Los Angeles.

Thomas led the WNBA in steals (42, 2.0 per game) and was fifth in defensive rebounding (7.2 ppg) for the Sun. Connecticut allowed an average of just 79.9 points her game – the second-fewest pints in the league.

Thomas averaged 15.5 points and 9.0 rebounds during the regular season. She increased her scoring average to 17.2 points in the playoffs, despite missing nearly all of game two of the WNBA semifinals after separating her right shoulder.

Los Angeles’ Candace Parker, who named the WNBA Defensive Player of the Year in voting by the league’s media, was not named to either the first or second team