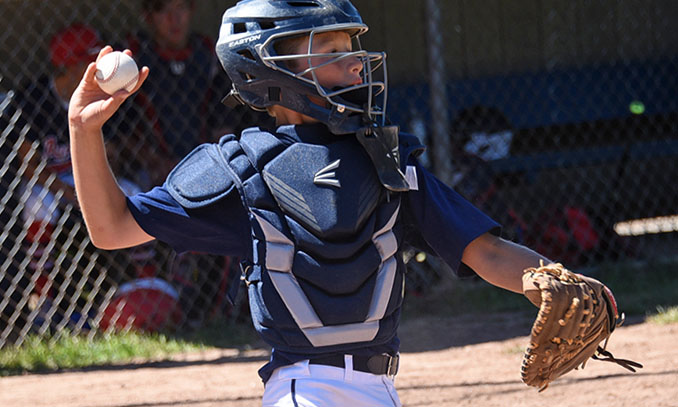 Simsbury catcher Brady Naspo doubled to drive in a run in Sunday’s 3-1 loss to Wallingford in the Section II title game in Litchfield.

A single to left field from Ryan Casey in the top of the eighth inning drove in two runs to lead the Wallingford Little League baseball team to a 3-1 win over Simsbury to win the Section II championship at Community Field in Litchfield on Sunday and earn a spot among the final four teams in the state championship tournament next weekend in Stamford.

Simsbury took advantage of their opportunities, taking a 1-0 lead in the third inning. Nicholas Matteo singled to center field and moved to second on a successful sacrifice bunt from Blake Alibozek. But Quinn struck out two batters to threaten and end the rally.

With two outs, Simsbury catcher Brady Naspo drilled a double to center field, driving in Matteo. Alibozek was thrown out at the plate on a throw at the plate from the shortstop to end the inning with Simsbury ahead 1-0.

Simsbury received some good pitching from starting pitcher Nathan Gritzmacher to preserve the 1-0 lead. In the second, Wallingford had a runner on third base with two outs but Gritzmacher got Wallingford’s Quinn to fly out to center field to end the inning.

In the fifth, Wallingford loaded the bases with two outs thanks to a single, an error and a hit batter. This time, Gritzmacher got Quinn to ground to him to end the threat.

Wallingford tied the game in the top of the sixth inning when Kenneth Marrow reached out for a low curve ball and smacked it over the fence.

In extra innings, the last batter who was out the previous inning begins the inning on second base. Wallingford had a runner on second base in the top of the eighth inning and he moved to third on Marrow’s single. Both scored on Casey’s two-run single for a 3-1 lead.

Gritzmacher, Naspo, Matteo and Alibozek had singles in the game for Simsbury, which finishes at 6-1.

“I am so proud of the boys and the coaches. They did a heck of a job,” Simsbury manager Brian Busam said.