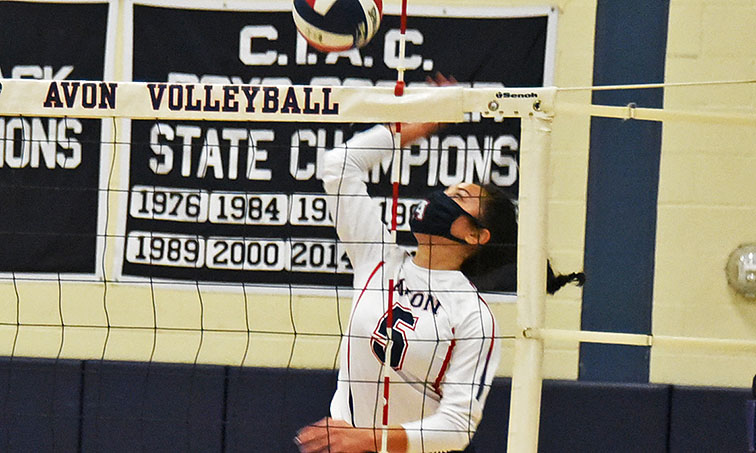 AVON, Oct. 2, 2020 – Senior Skyler Blackinton could feel the momentum and possibly the game slipping away from the Avon High volleyball team on Friday night.

The Falcons were playing their home opener against long-time arch-rival Farmington. Avon had a five-point in game four but saw the Indians outscored the Falcons, 13-2 to seize control of the game. A victory for Farmington would send the match into pivotal game 5 and a quick sprint to 15 points and the overall match victory.

So, Blackington called timeout. “The coaches always don’t know how we are feeling on the court together,” she said. “You feel some tension and feel that things are falling apart I just took it upon myself to call timeout. Everyone needed a breather – not just physically — to get ourselves back together. Everyone needed to calm down, let it go and restart.”

It didn’t stop the rally but it slowed it down. The Indians turned a five-point deficit into a five-point advantage. But Blackington had a kill and two consecutive service aces to get Avon back in the match. She helped Avon outscore Farmington 8-2 to close out game four and the match.

The Indians had a 12-match winning streak against Avon went from 2009 through 2018. Avon snapped that streak a year ago when they swept Farmington as they rolled to a 23-4 record and their first CIAC Class L championship.

This year, it is a different season for the Falcons (1-1) and it’s not just the fact that the players have to wear masks when they play to avoid spreading the contagious COVID-19 coranavirus and can have virtually no fans in the building – just one parent each.

It’s a new squad on the floor. Emily Dempsey, the talented 6-foot outside hitter earned All-State and All-Region I honors (New England and New York), has graduated along with 6-foot-4 setter Abby St. Onge, an All-State caliber player and Bailey Braun, an All-CCC West honoree.

Avon’s Katelyn Wankier follows through a hit in Friday night’s match against Farmington. The Falcons won, 3-1.

“We have a core of seven players that are primarily our starters,” long-time Avon High head coach Curt Burns said. “They did play last year, including some time in the finals (a win over Guilford) so they have been (playing under) the biggest and brightest lights.

“Even though we don’t have the size and physicality that we did last year, they know how to play volleyball and you saw that tonight,” Burns said. “They showed their heart and their skill and we will make the best of it.”

The Indians (0-2) won game one thanks to late kills from Isabelle Huelin and Ali Godfrey to earn a 27-25 win. Avon fought off two match points before Huelin’s game-winning hit.

In game two, the game was tied at 21-21 but Elle Powers had a key kill to put the Falcons in front for good. A kill from Wren Worth gave Avon a three-point lead, 24-21 and a hit that was long from the Indians gave Avon a 25-21 victory.

Avon took an early nine-point lead in game three, 13-4. Farmington cut the lead to three, 23-20, but it was too lake as Blackinton had a key kill and Lauren Carlson’s serve was returned and the Falcons took a 2-1 lead in the best-of-five match with a 25-20 decision.

Avon took a 14-9 lead in game four only to see the Indians rally with a 13-2 run to take a 22-16 lead. Katelyn Wankier had a block to stop the run and put Blackinton on the serving line. She had two serving aces and a kill to cut the Farmington lead to two, 22-20 and get the Falcons back in the match.

Avon cut the lead to one with Wankier tapped the ball over the leaping defenders on the front line (a dink in volleyball terminology) and tied the match at 23-23 thanks to a serving ace from Worth.

Tied at 24-24, a Farmington player turned the ball over by serving into the net and Avon’s Kelli Raines ended the match with a serving ace to give Avon a 26-24 win in game four and a 3-1 win in the match.

Blackinton had a team-high 17 kills for Avon and 20 digs. Elle Powers had 12 kills before hurting her knee in the final seconds of game four. She landed awkwardly after hitting the ball. Wankier had seven kills while Raines had five.

Junior Tessa Hofheimer led the team with 24 assists while Olivia Evanko had 14 assists. Worth had 13 digs and three assists.

In order to help keep the players safe during this pandemic, schools are playing a limited schedule of 12 games against teams in their area. The CIAC played Avon in CCC Region B with Farmington, Lewis Mills, New Britain, Southington, Bristol Eastern and Bristol Central.

The CIAC has promised a yet-to-be-determined tournament experience, if it is safe, at the end of the season in November.

Sometimes, there are flashes of regret when playing with a mask in an empty gym devoid of students, friends and family.

But the gift and opportunity to play the sport they love isn’t lost on the players, either.

“At the end of the day, there are sports like football that don’t get to play and I still get (an opportunity to play) my senior season and they don’t,” Blackinton said. “So, I don’t take this for granted. I will play the 12 games I have to the best of my ability.”

The Falcons will host their Senior Day activities next Thursday when they host Lewis Mills.