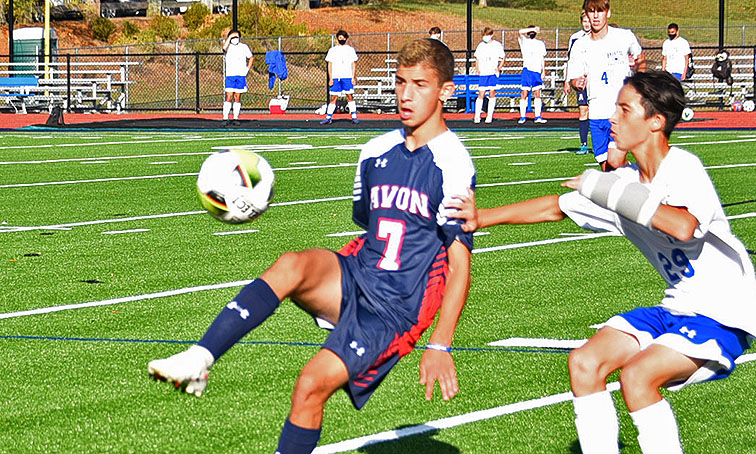 Avon’s Tyler Nyberg (7) scored his fourth goal of the season on Saturday in Avon’s 1-1 tie with Farmington.

AVON, Nov. 6, 2020 – Farmington’s Joseph Maye scored with 5:15 left in regulation to enable that the Indians boys soccer remains undefeated with a 1-1 tie with Avon on a gorgeous, warm fall afternoon Saturday on the turf field outside Avon High.

The Indians are 9-0-2 in this pandemic-shortened season with two ties in the last three games.

Avon (4-5-3) had a 1-0 lead thanks to a goal from Tyler Nyberg with just 8:52 gone in the game off a team-leading ninth assist from Thomas Keenan. His nine assists for the most in a single season for the Falcons since they joined the CCC in 2014. Goalie Michael Zelazny made seven saves in net for the Falcons.

The Falcons played a spirited game just 24 hours earlier in a 3-2 loss to Plainville on Friday. Avon trailed 1-0 and 2-1 to tie the game before the Blue Devils won the game.

Junior Nate Tiffany and Zelazny scored for Avon. Zelanzy started the game in goal but head coach David Zlatin put Zelanzy on the field put Jack Noyes in goal to try and tie the game. Zelanzy scored 30 seconds after getting out onto the field off an assist from teammate Braden Gilbey to tie the game at 2-2.

Avon will play two more games as part of the CCC Region B post-season tournament. The Falcons will host Lewis Mills on Tuesday and will face the winner or loser of the New Britain/Southington match depending on the Falcons do in their game with Mills.

Avon’s Tyler Nyberg scored his fourth goal of the season on Saturday in Avon’s 1-1 tie with Farmington.

Make your voice heard and vote on Election Day

No. 8 Canton looks sharp in 4-0 shutout win over Suffield
Tiffany has two goals as Avon blanks Lewis Mills in CCC Region B playoff