GRANBY, Sept. 15 – After winning the first game of the season over Coventry, the Canton High boys soccer team has lost two consecutive games. The Warriors fell to Granby Saturday afternoon on the road, 6-1.

Grady Kelly had three goals for the Bears (2-0, 2-0 NCCC) while Ted Cormier added two and Colby Millbrandt scored. The Bears have won four in a row over the Warriors and have dominated the series recently, outscoring Canton 20-2 in the last four meetings

For Canton, sophomore Jackson Miner scored his third goal of the season in the second half on a through pass from teammate Peter Fuller to put the Warriors on the board. Evan Moore made nine stops in net for the Warriors (1-2, 1-2 NCCC). 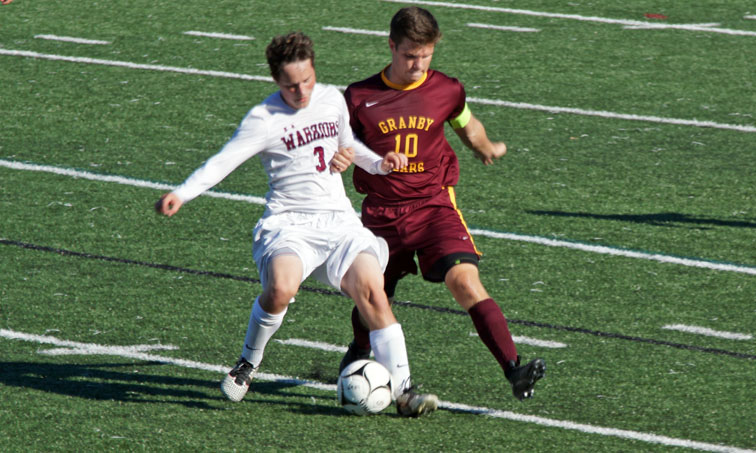 Miner and James Mattson led the Warriors in scoring a year ago with six goals each as Canton went 9-8-2 and advanced to the Class S quarterfinals. They are two of the seniors in the lineup for Canton, which has 11 seniors on the roster this fall.

Miner also had the two goals in the 2-1 victory over Coventry in the opening match of the season on September 11. He has scored all three of Canton’s goals through the first three games. The next afternoon, the Warriors dropped a 2-0 decision to Rockville.

Canton returns to action on Monday when they host Hartford Magnet Trinity College Academy (HMTCA) at 4 p.m. on the turf field.

The squad will play three games under the lights here in Canton against Granby on September 28, Ellington on October 6 and East Windsor on October 15.

Head coach Bill Phelps is now in the midst of his 30th season as head coach of the Warriors. He began the season with a career record of 217-236-44 and is the all-time leader for wins in program history. He led the Warriors to the Class S championships in 1995 and 2003.

This is the 54th season of Canton High boys soccer, which began in 1965.

Ansonia won record 124 games in decade; Records of all state teams in 2010s