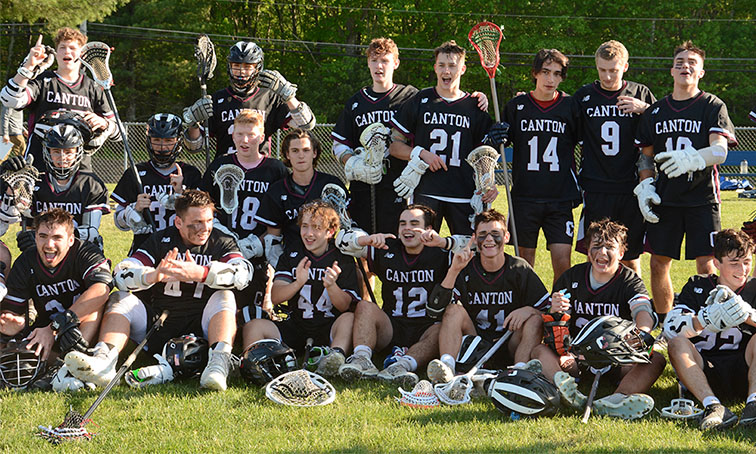 BURLINGTON, May 24, 2021 – A team that has never had a winning season nor won more than eight games in a single season are now conference champions.

Canton went undefeated in a revamped CCC South this spring that includes three teams from the North Central Connecticut Conference. The six teams from the NCCC were added to the CCC in March – just a few weeks before the season was to begin — to help ensure that the NCCC teams would have a full schedule of games to play this spring.

At the beginning of the season, Canton High coach Chris Weller wasn’t familiar with the teams in the CCC South. Now, he is after the Warriors ran the table in the league, including a one-goal win over Wethersfield earlier this month that put Canton (14-1, 9-0 CCC South) in position to claim the first championship in the program’s history.

“This is a great accomplishment for this group of boys,” Weller said. “They’ve competed. They’ve endured. They’ve come together and they’ve believed in each other and done something great.”

Mills tested the Warriors on Monday, surrounding Canton’s leading score Ryan Weller in an attempt to slow down Canton’s high-scoring offense. The sophomore was limited to just three goals and no assists, one of his lowest scoring games of the season.

His teammates had his back.

Griffin Weller (22) had a season-high five goals and two assists to lead the Warriors past Lewis Mills on Monday.

Griffin Weller had a season-high five goals and two assists while Ryker Bahre scored a pair of goals and Mark Freedenberg had two goals and three assists.

“When they shut Ryan off, Griffin stepped up. Ryker Bahre stepped up. Mark Freedenberg stepped up,” Chris Weller said. “There were a whole cache of people that came through to help us out. It proved we’re not a one-man show. We have a lot of players who can play and score.”

William Hekeler had five of Mills’ eight goals. But the Spartans couldn’t close the gap, especially in the second half with a more aggressive Canton defense knocking the ball out of the sticks of the Mills’ players and controlling the pace of play.

“This is one of the best teams we played all year they wanted it just as much as we did,” Canton’s Braden Humphrey said. “It came down to conditioning and heart at the end of the game who could put their best guys out there and work hard every single shift.”

As the Warriors prepare for the Class S tournament, they will have two of their toughest games of the season as they complete the regular season.

On Wednesday, Canton travels to Granby (6-8, 4-3 CCC North) for a 4 p.m. contest against the Bears, another team they have never beaten in the program’s 10-year history.

On Friday, Canton will host Somers in the final of the NCCC Tournament at 7 p.m. on the turf field. The league wasn’t going to hold a tournament this year but changed their mind in the past week.

Canton and other NCCC teams were not eligible play in the CCC’s post-season tournament due to the arrangement the two leagues came up with in March.

Canton takes another step toward a conference title by beating Bristol
Granby slips past Canton, 10-9, in game cut short by thunderstorm