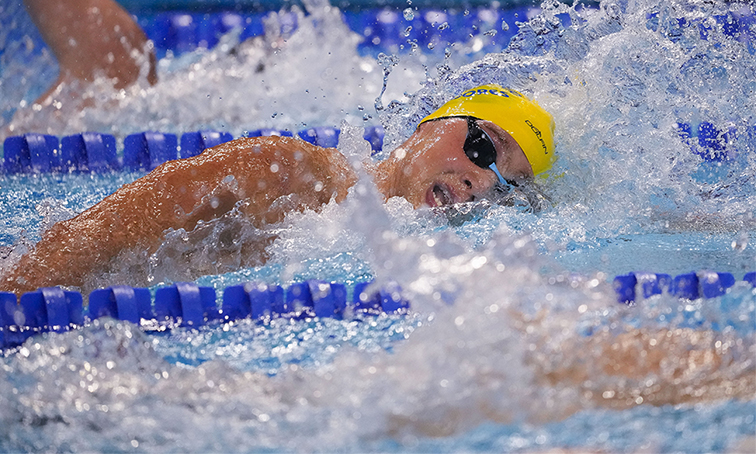 Bobby Finke, the University of Florida junior, pulled away on the final two legs to win the men’s 800-meter freestyle at Thursday night’s U.S. Olympic Trials in Omaha, Nebraska, and to earn a spot on the American Olympic swimming team for the first time.

Finke’s final two 50-meter legs were two of the three fastest legs he swam in the race as he held off Michael Brinegar, 21, of the University of Indiana by 1.72 seconds. Finke swam his second fastest 50 meters in the last leg of the 16-lap race – 29.10 seconds.

Brinegar, who held off North Carolina State’s Ross Dant by 0.72 of a second with a personal-best time of 7:49.94, has a good shot at getting a spot on the Olympic team by finishing second.

Canton’s Will Gallant, who earned the top seed with a Trials Record and personal-best time of 7:53.76 in qualifying on Thursday, finished fifth with a time of 7:57.97.

Before the trials, Gallant said his strategy would be to start hard, grab an early lead and hold off would-be challengers. His fastest two legs came in the race’s first 100 meters. Gallant, 19, had the lead after two laps but soon settled into a four-man pack at the front of the race with Finke, Brinegar and Dant.

With 300 meters gone in the race, Gallant was third but Finke was beginning to pull away. By the midway point in the race, Finke, Brinegar and Dant began to slowly pull away from Gallant.

With his winning time of 7:48.22, Finke moves up to No. 7 in the world in the 800 freestyle. It is a new Trials record time, breaking the mark that Gallant set a day earlier in qualifying.

Gallant has one additional race remaining at the Olympic Trials. On Saturday, he will be swimming in the 1,500 meter race – which is nearly a mile. He seeded eighth in the race. Finke is the top seed in the 1500 while Jordan Wilimovsky of California is seeded third.