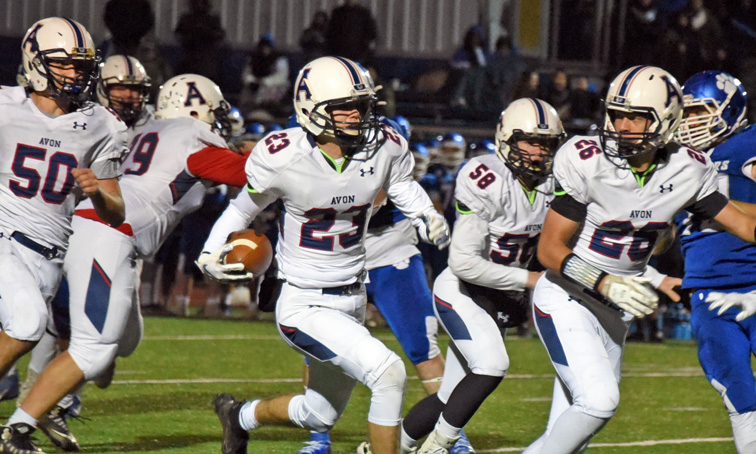 Avon’s Tyler Brookshire (23) runs for 13 yards and a key first down in the fourth quarter of Friday’s 21-14 win over Rocky Hill.

They learned that they can’t coast to the finish with a lead. They have to fight for the victory.

Avon had a key sack, a blocked punt and an interception in the final seven minutes of the fourth quarter that helped the Falcons win their second game of the season with a 21-14 CCC Division III victory over Rocky Hill at McIvar Field.

Avon QB Tabor Engle completed 8-of-18 passes for 116 yards and two touchdowns while Quantrel Stewart ran for 45 yards and a pretty 27-yard touchdown to lead the Falcons (2-7).

“They really wanted this and they fought for it,” Avon High coach Jeff Redman said. That is what a young team is learning to do. We’re just executing better and even though we have a lot of young kids in there right now that are stepping in. They are doing a remarkable job. They really are.”

This season has been a building season for the Falcons. They’ve been better than they were a year ago.

“We’ve gotten better every game,” Redman said. “I know the kids wanted more wins this year. They have to understanding, we’re putting the footings in. Last year, we made it through (the season with low numbers and plenty of inexperienced players). But now that we have the footings in place, we’re beginning to build the structure of the program.”

This time, with an opportunity to win, the Falcons took care of business.

Tied at 14-14, Avon took the lead on a 26-yard touchdown pass over the middle from Engle to Tyler Brookshine, who leaped between two defenders at the 15-yard line to snatch the ball out of the air and evaded two Terrier tacklers to make it to the end zone.

The Terriers got the ball and marched downfield to the Avon 23-yard line with 8:55 remaining in the game. But the Terriers were penalized 15 yards for a personal foul, moving the ball back to 40. After Avon’s Franenho Griffin stopped the Rocky Hill running back Matthew Sevigny for no gain, Falcon junior Leighton Wittig sacked Rocky Hill QB Konnor Walsh for a five-yard loss on third down.

Rocky Hill was forced to punt but Wittig got through the line to block the punt for the first time in his career and Avon took over on the Terrier 44-yard line.

“I saw I could get through if I juked the guy back there and it gave me a wide open look (to block the punt), Wittig said.

Rocky Hill (2-7) had one more chance but that drive ended with Brokenshire intercepting a pass to stop the drive.

Avon got the ball back with 2:44 remaining and had to run out the clock. On third down and 12 from the Rocky Hill 50-yard line, Engle found Colby Nemarich streaking down the sideline for a touchdown. But the play was called back for a blocking penalty downfield.

Fortunately for Avon, the illegal block was thrown at the 15-yard line, more than enough for an Avon first down. With 58 seconds remaining, Avon was once again facing third down and 13 yards but Brokenshire gained 13 yards for a first down and the Falcons were able to run out the clock.

“Tyler Brokenshire had an unbelievable day,” Redman aid. “He ran the ball well. He got the first down at the end of the game. He had a beautiful catch and played great defense.” Brokenshire had a career-high three receptions for 55 yards.

“Quantrel just has great open field vision. He is tough and played his heart out,” Redman said. “Tabor played well. It was the second straight game he hasn’t thrown an interception. And how about the catch that Sean Nolan made.”

Nolan caught four passes for 26 yards, including a 17-yard reception in the third quarter that gave Avon a first down. Nolan came down with the ball with three Rocky Hill defenders around him.

Avon took an early lead, scoring on their first drive, a six-play, 55-yard march that ended with Engle running for a nine-yard touchdown and a 7-0 lead. Engle’s 25-yard pass to Brokenshire was the big play on the drive.

Rocky Hill responded quickly with a 10-play, 80-yard drive that ended with Matthew Sevigny scoring on a 13-yard touchdown pass from QB Konnor Walsh. But the Terriers missed the extra point and Avon led, 7-6.

In the second quarter, Avon junior Jake Bredice sacked Walsh for a 13-yard loss. On the punt, Stewart had a 13-yard punt return to the Rocky Hill 27-yard line. On the first play of the drive, Stewart got to the outside and took off for a 27-yard touchdown run and a 14-7 lead.

Rocky Hill tied the game on their first drive of the third quarter on a 37-yard run from Sevigny and a successful two-point conversion run by Sevigny.

Avon returns to action on Tuesday, November 26 when they close out the season against Simsbury (8-1) in the Valley Gridiron Classic at Holden Field at 6:30 p.m.

Lights on Avon fundraising pauses as country deals with pandemic