Simsbury’s Mark Bedson ran for a game-high 167 yards and three TDs to lead the Trojans to their fifth straight win Tuesday night in the Valley Gridiron Classic. More game photos

SIMSBURY, November 20 – It was a hot August afternoon and the first day of practice for the 2019 high school season. Avon High head coach Jeff Redman walked out freshly cut grass and saw his team of just 18 players.

He didn’t think they would win a game. “I didn’t see how it would be possible,” he said.

Three months later, he was on the sideline on a cold, frost-covered field at Simsbury High with his Falcons facing the Trojans in the fourth annual Valley Gridiron Classic on Tuesday night at Holden Field. Redman can be intense on the sideline. He urges his players to play tough, execute and get their jobs done.

His Avon team came into the game with two victories in their last three games and they had come close to winning in two other contests.

As expected, Simsbury dominated with senior running back Mark Bedson rushing for a game-high 167 yards and three touchdowns to lead the Trojans to their fifth straight victory and their third straight win in the Valley Gridiron Classic series in a 42-6 victory.

Simsbury (5-5) scored three touchdowns in a little over six minutes in the second quarter to seize control of the game.

But Redman was smiling on the sideline Tuesday night. He was so proud of how far his team had come since the hot and lonely days of August.

Against Simsbury, he had his best player – senior Henry Schrecengost, the 6-foot-6, 290-pound lineman – run the ball for the first time in his career. In the preseason, Redman openly said that the offense would run behind Schrecengost. He wasn’t worried about giving away his game plan because he was confident that few could slow Schrecengost down.

Schrecengost ran for 46 yards on nine carries. “He had a blast,” Redman said. “Who is going to stop that kid? He gained six or seven yards a carry. My whole thing about this game was to give the kids the ball and let’s have some fun with the game.”

Schrecengost admitted he was surprised when the plays were revealed to him in practice this past week. “The plays were not that sophisticated,” he said. “It was just a run up the middle but I had a great time doing it.” 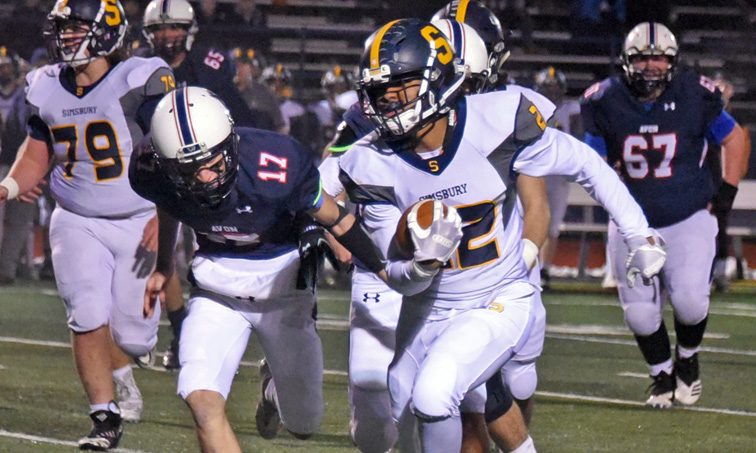 This Avon team (2-8) struggled this year. They were shutout five times and in four consecutive games. They scored just 88 points – the second lowest total in a 10-game schedule in school history.

This was a team that took pride in fundamental football and winning a play. Unfortunately for the Falcons, only twice did they win enough plays to win a ballgame.

Avon did play in several games in extreme conditions– some sweltering games in September, a victory over the Bulkeley co-op team in a driving rainstorm on a muddy field in October and last night on a frost-covered field in near-freezing temperatures in Simsbury.

“We can run our players and execute them perfectly, it’s a feeling you can’t replicate,” Schrecengost said. “When we can run the plays perfectly, we get some crazy gains.”

After Josh Cronkite intercepted a pass on Simsbury’s first offensive play, Avon 37 yards on eight plays to the Simsbury 11-yard line with five different ballcarriers running with the ball. Schrecengost gained seven yards on a third down-and-one play to keep the drive alive.

Simsbury stopped the Falcons when Mohammed Haroon intercepted a Jadon Folkwein pass on the goal line.

“There was a pride in what they do,” Redman said. “We’re not as good as some teams, obviously. Simsbury is a superior team but (Avon) never quit. They went after it the whole time and we did the fundamentals pretty well. When we get more kids involved and the program expands, they will get better and they’ll be more competitive.

“There is a good nucleus here and there is a fire burning here,” he said. “We had kids come out who had never played before because they wanted to be part of something.”

After throwing an interception on their first drive, Simsbury marched 99 yards on eight plays with Bedson rushing for 63 yards on four carries. Quarterback Jackson Butler scored from six yards out with 2:26 left in the first quarter. Kory Zall’s extra point made it 7-0.

On Simsbury’s next drive, Butler completed three passes including a 34-yard touchdown reception to Jeffrey Coleman for a 14-0 lead after Zall’s extra point. It was Butler’s tenth TD pass of the season and the senior finished with 1,582 yards passing this season.

Bedson’s 39-yard run for a touchdown with 8:15 remaining in the first half was the first of three TDs for the senior running back, who finished the season with 1,113 yards rushing on the year. It gave Simsbury a 21-0 lead.

On Simsbury’s first offensive play of the second half, Benson when 58 yards to the house for his team-leading 18th rushing touchdown of the season as the Trojan lead grew to 35-0. Jackson Harper’s 43-yard touchdown run gave Simsbury a 42-0 edge. Zall was 6-for-6 with extra points on Tuesday night.

Avon got on the board with an 81-yard drive that took 18 plays. Folkwein scored from the six-yard line with 4:54 remaining in the game. Twice, the Falcons converted on fourth down in the drive with Schrecengost and Dan Quick (15-53) each picking up first downs.

After the game, Redman was smiling — pleased how far his team had come from those hot days in August. “I’m honored to have worked with the kids that we had,” he said. “I’m overjoyed with them. The scores and the record mean nothing. It is about what you bring to the sport. They had their priorities in line. They’re all good students and great citizens in school so that is the best representative we can have.”

GRID DUST: Simsbury leads the overall series against Avon, which began in 1961, by a 8-5 margin. … This year, Simsbury closed out the season with five straight wins. A year ago, they went 7-3 and closed out the campaign with six straight victories.

Canton girls get back on winning track with victory over HMTCA