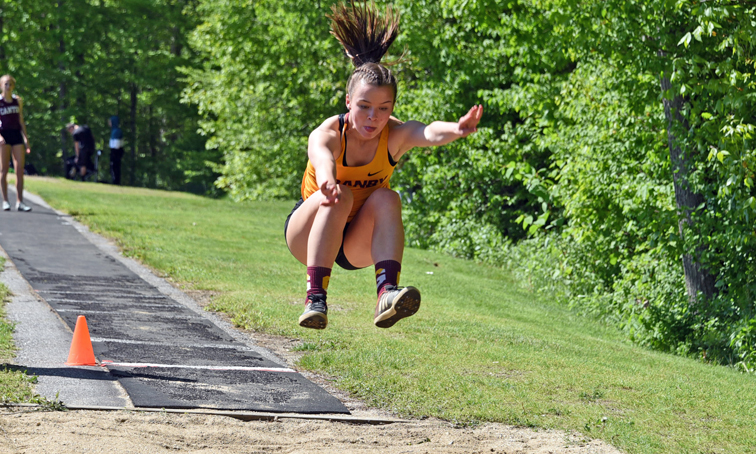 Granby’s Lauren Roy finished second at the NCCC championships, above, but won her first state title at Wednesday’s Class M championships with a season-best leap of 17-6 feet.

NEW BRITAIN, May 29 – It’s been a while since there was a state champion on the Granby Memorial boys track and field team. That time has arrived.

On the girls side, sophomore Lauren Roy had a season-best leap of 17 feet, six inches to win a Class M title in the long jump to help the Bears finish 17th as a team.

Smith came close to winning state titles a year ago at the Class M meet, but he was a close second in the long jump and triple jump. This year, it was different.

Smith won the long jump in dramatic fashion. When he approached the runway for his third and final jump in the finals, he was in fourth place with a jump of 20 feet, 11 inches. But he leaped 22 feet and ¾ of an inch to vault past Killingly’s Jelani Johnson (21-9½) and into first place.

Johnson took just one leap in the preliminary round and passed on his remaining two jumps. In the finals, he took one jump, fouled on his second and took a pass on the third jump.

In the triple jump, Smith took the lead for good on the final jump of his three preliminary round jumps. He leaped a season-best 44 feet, 6½ inches to move into first place. He beat Waterbury Career’s Jonathan Edwards, who jumped 42-6 on his first jump of the competition.

Roy put the pressure on her competitors right away in the long jump with a season-best leap of 17-6 on her first jump to take the lead. Plainville’s Sydi Spencer got the closest with a leap of 17-3¾ but it wasn’t enough to catch Roy.

Roy also took sixth in the triple jump with a leap of 34-4¼. Roy is the first Granby girl to win a state title in outdoor track since Nicole Szilagyi won the 100 hurdles at the 2017 Class M championships.

Teammate Megan Wassick was fifth in the 100 meters in a tight finish. Wassick finished in a group of three runners. Berlin’s Nicole Kronior was fourth with a time of 13.171 seconds while Wassick had a time of 13.18 seconds. Griswold’s Audrey Sturmiska was sixth in 13.19.

Wassick was also seventh in the long jump with a leap of 16-5¾. 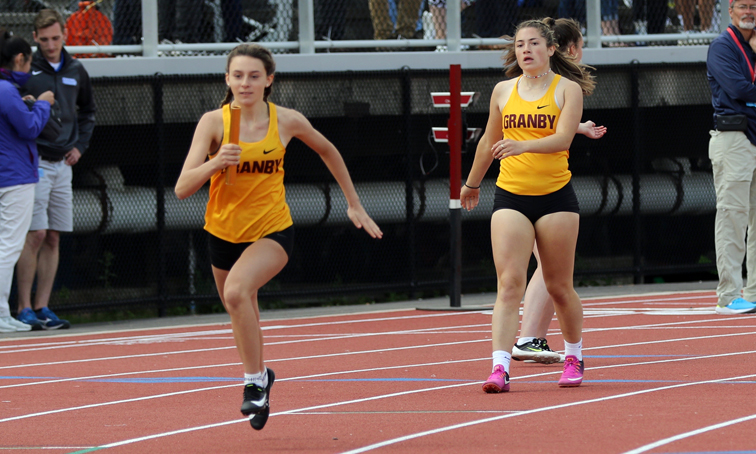 Smith, Roy and Wassick will advance to Monday’s State Open championships in New Britain. The top five finishers in each event qualify for the State Open.