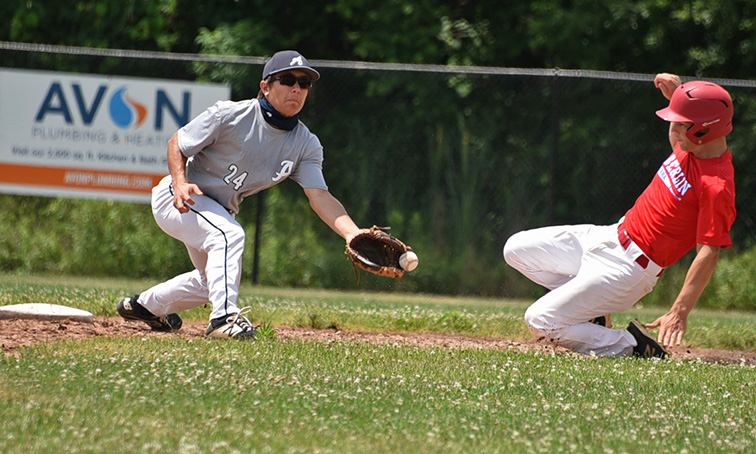 Avon second baseman Justin Hasler takes the throw but Berlin’s Daniel Veleas steals second base in a Connecticut Elite Baseball Association U-19 game in June at Buckingham Field in Avon.

A three-town team from Rocky Hill, Cromwell and Portland won the 19U title, Bristol captured the 17U crown, Ellington/Somers prevailed in U-15 and Simsbury capped off an undefeated season with a win the 14-and-under title game.

The CEBA’s 19-and-under division had the most teams with 36. RCP beat Northern Connecticut Legion (NCL) 3-2 the 19U title. It was the ninth straight win for RCP, which got a game-winning hit from Nick Polizonis in the fifth inning to take a 3-1 lead. Polizonis had three hits including a two-RBI double in the fifth inning.

Pitcher Tyler Baldwin struck out nine and scattered six hits in 6 2/3 innings of work before teammate Tyler Ruff picked up the save.

In the 17U tournament, Bristol gave up just one run and eights in three victories to win the title. Pitcher Matt Beaucar gave up just one hit over six innings in the final to secure the win for Bristol and earn tournament MVP honors. Bristol’s Adam Caron was named the top hitter in the tournament after getting four hits in three days. He was 3-for-3 in the 3-1 semifinal win over Wallingford.

Simsbury finished 15-0 with a 10-0 win over South Windsor in the 14U championship game.

The league provided a place for legion teams to play games during the summer (July 1-Aug. 9) and in the fall (mid-August to mid-October) as long as teams followed new safety-related rules mandated by Governor Ned Lamont.

The high school baseball season was cancelled due to the pandemic and American Legion also cancelled their summer baseball program in May — leading to the organization of the CEBA.

The league generally followed key American Legion rules. Wood or BBCOR approved wood composite bats will be used in the three older-age levels, with BBCOR metal bats allowed for the 14U division.