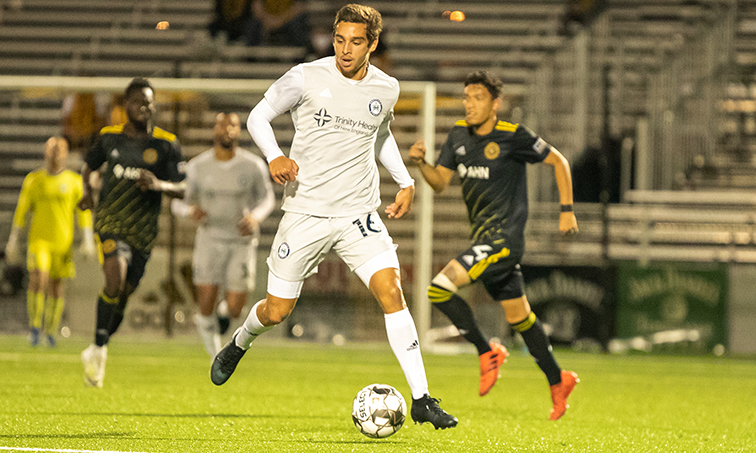 This was a surprise.

Twice, the Hartford Athletic soccer team had played the first place Pittsburgh Riverhounds this season. Hartford lost both games by a combined score of 8-0.

This time, the Athletic took advantage of a Pittsburgh mistake. Late in the first half, Hartford’s Alex Dixon sent a long ball downfield over the Pittsburgh defense. Riverhound defender Patrick Bun-Anderson got a foot on it. But it went bounced right to the feet of Hartford’s Ever Guzman, who was racing toward the net.

With a half a step on Bun-Anderson, Guzman raced into the penalty area and lifted a shot over the shoulder of Pittsburgh goalie Danny Vitiello, who came out of his net to try and grab the ball. Guzman’s goal with 15 minutes left in the first half was his team-leading fifth goal of the season

It was also the game-winner as Hartford kept their Group F championship hopes alive with a stunning 1-0 win over the Riverhounds Saturday night in USL Championship play at Highpark Stadium in Pittsburgh.

Hartford (9-2-3) can win Group F with victories over Philadelphia Union II and the New York Red Bulls II in their final two games.

Hartford and Pittsburgh (10-4-1) have both already qualified for the Eastern Conference playoffs but the winner of Group F earns a home game in the first round. The Riverhounds could have clinched Group F with a win on Saturday.

This wasn’t easy for the Athletic, who played with just 10 players in the final 20 minutes and extra time when starting goalie Parfait Mandanda received a red card and was ejected after tangling with Pittsburgh’s Steevan Dos Santos vying for a loose ball at the edge of the penalty area.

Mandanda had played every minutes of the season in goal for Hartford. It was up to backup goalie Mike Novotny to preserve the win and keep Hartford’s playoff hopes alive.

Pittsburgh had shutout their last five opponents and Vitiello had not given up a goal in 519 minutes.

“I mean for me, I thought it was a poor performance,” Pittsburgh coach Bob Lilley said. “It started early on. A big key for us was to be able to find outlets and we didn’t do that very well. We just banged long balls that didn’t do a lot for us.”

“It’s disappointing to not have our best performance in such an important game, but you have to give credit to Hartford for executing their game plan better than we did.”

Pittsburgh took control of the game in the early and came close to scoring in the ninth minute when Robbie Mertz got into the right side of the penalty area and then cut centrally onto his left foot, but his finish bent just wide of the left post.

Jordan Dover had a similar chance off a good piece of interplay at the top of the penalty are in the 25th minute as his shot with the outside of his right foot didn’t quite curve enough to find the target.

Hartford had a big chance when they were awarded a penalty kick when Dover clipped Hartford’s Tyreke Johnson as he moved into the left side of the penalty area with 28:20 gone in the game.

Guzman took the penalty kick but his shot down the middle was denied by Vitiello with a tremendous save, as his trailing leg kept the ball out of the net.

The Athletic almost capitalized on the ensuing corner as the visitors recycled possession after the initial cross was half-cleared, but Dixon’s low shot from the right side of the penalty area fizzed just wide of the left post and just out of the reach of Guzman as he slid in to try and turn the ball home.

With Hartford limited to 10 men with Mandanda’s ejection, Pittsburgh tried to take advantage in the final 15 minutes. With seven minutes to go Dos Santos couldn’t quite guide his header on target off a back-post cross from the left by Ryan James. Three minutes later, James put the ball in the net but was whistled for offside as he stretched to send the ball home past Novotny.

Pittsburgh continued to push late for an equalizer and Mark Forrest sent a header wide off a corner kick by Kenardo Forbes, who made his return to the field after injury as a second-half substitute. But while the Hounds pinned the Athletic back, they were unable to find a way through as a final chance that fell to Albert Dikwa slid wide of the left post allowing Hartford to leave town with a huge win.

Loudoun games cancelled: Loudoun United’s three remaining games have been cancelled due to a combination of multiple people in the organization testing positive for COVID-19 and not enough time left in the season to reschedule games.

Three points for a win and one point for a tie. Teams will play 16 regular season games.
y-clinched playoff spot