Vaudreuil fired by Roughnecks after rough start to season 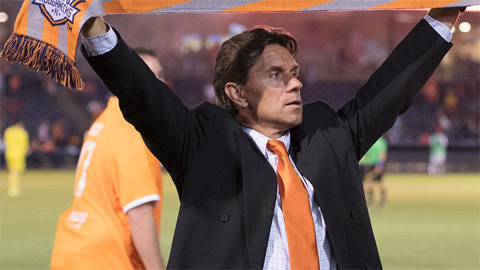 TULSA, Okla., June 25, 2018 – Eight months ago, the Tulsa Roughnecks soccer team gave Canton native David Vaudreuil a two-year extension after he led the Roughnecks into the United Soccer League (USL) playoffs for the first time in 2017.

Now, Vaudreuil is out of a job. The Roughnecks fired Vaudreuil on June 25. After going 14-14-4 and earning the first playoff in team history, the Roughnecks have struggled this season. They are 0-8-7, have scored just 11 goals and are in last place in the USL’s Western Conference.

Tulsa native Michael Nsien will take over as interim head coach for the remainder of the 2018 season.

“The decision came after careful consideration,” Roughnecks executive Brian Carroll said. “We appreciate everything that David has done for the organization, but we felt the team needed a new message and direction.”

The 14 wins in 2017 were a franchise-record achievement for Tulsa.

Vaudreuil, a former defender and midfielder who played 131 games in Major League Soccer and was on two squads that won MLS championships with D.C. United in the late 1990s, was instrumental in securing the Roughnecks affiliation with the MLS’ Chicago Fire in 2017.

A graduate of Princeton University, he has an expansive coaching background, including a stint as head coach with the Atlanta Silverbacks in the old USL First Division in 2004-05. He went 14-11-3 in his first season before being released in June 2005, finishing with a record of 17-16-6 with the club.

Vaudreuil has served as an assistant coach with the New England Revolution and as the General Manager and Head Coach of the AC Milan USA Academy.

He also previously spent time under Bruce Arena when he served as the head coach of the Los Angeles Galaxy U-18 squad. In 2016, he was an assistant coach with Rayo OKC in the North American Soccer League.

At Canton, he earned All-American and All-State honors in his senior season (1983) under the late head coach Bryon McKusick. Vaudreuil scored 28 goals in 1983, a single-season school record at that time that was later broken by Karl Schilling (33) in 2003. Vaudreuil finished his scholastic career with 47 goals, fourth best in school history. He helped the Warriors win a Class S championship in 1981.