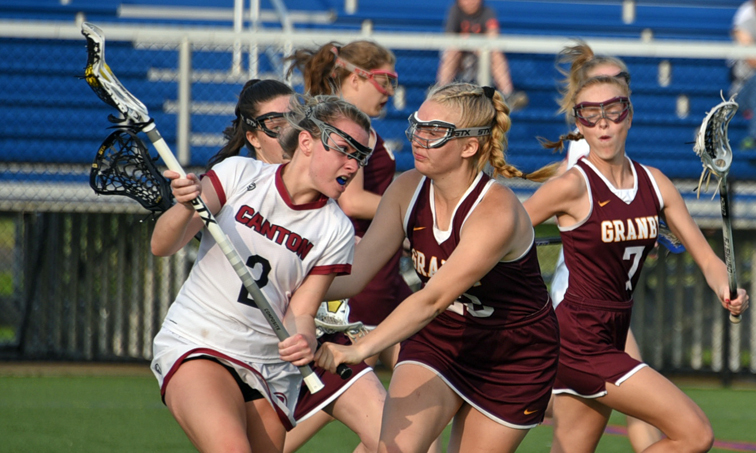 Canton (15-2, 10-0 NCCC) became the first team to win four straight NCCC Tournament titles and extended their NCCC win streak to 35 games dating back to the 2016 season.

Since losing to No. 9 New Fairfield, 17-6, on May 11, the Warriors have won four straight matches including an eight-goal win over Simsbury nine days ago in the pouring rain, 15-7.

“We’ve gotten on a pretty good roll since New Fairfield,” Canton High coach Sean Cole said. “That win over Simsbury gave us a ton of confidence. We just dominated them.”

Granby (13-5, 8-2 NCCC) has been the one team in the NCCC that has been competitive with Canton this season but the Warriors controlled play for long stretches of this league tournament championship game.

“I didn’t think we would be as dominant as we were tonight,” he said. “There were stretches tonight when we just outstanding. Defense leads to great offense.”

Ashley Potter and Allie DelSanto had two goal each for the Warriors, who had 11 assists in the game. DelSanto and McNally had three assists each while Charron had two.

“We got tremendous play from all over the field,” he said. “Our goalie (Courtney LeFave) came up big in the second half.”

The Warriors celebrate with Madi Bahre, right, was was named the tournament’s most outstanding player.

The most outstanding player in the tournament was Canton’s Madi Bahre for her defensive play. The Bears had just two goals in the second half before adding a third score in the final 11 seconds.

Granby scored three times in a two-minute span in the first half to cut Canton’s seven-goal lead, 8-1 to just four, 8-4, when Bahre was sitting out for a penalty. But that was as close as the Bears would get.

Both teams will be playing in the upcoming Class S tournament. Canton looks to be the No. 2 seed in the tournament behind New Fairfield. First round action begins on Tuesday.

The Canton High girls lacrosse team went 14-2 for the third straight year and won the NCCC Tournament for the fourth consecutive season.

On Senior Night, Canton takes care of business with win over Windsor Locks

Another high-scoring performance for Canton in 11th straight victory