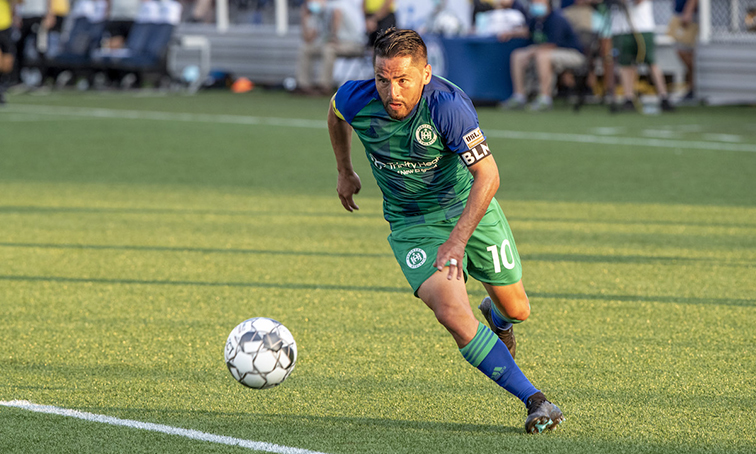 Hartford’s Danny Barrera had his team-leading sixth assist of the season Saturday night to lead the Hartford Athletic to a 2-1 win over the New York Red Bulls II at Dillon Stadium. (Photo courtesy Hartford Athletic)

The 30-year-old midfielder had his team-leading sixth assist of the season and put a corner kick into play that resulted in the winning goal as Hartford improved to 5-1 on the season with a 2-1 USL Championship victory over New York Red Bulls II before 1,375 fans at Dillon Stadium in Hartford on Saturday night.

With the win, Hartford maintains sole possession in Group F of the USL Championship standings with a three-point lead over the Pittsburgh Riverhounds (4-3, 12 points).

Alex Dixon got his second goal of the season for Hartford off a beautiful assist from Barrera while Sam Strong scored his first of the year, capitalizing on a mistake by Red Bulls II goalie Alex Bobocea.

“This is the best we’ve played since we started the season,” Hartford coach Radhi Jaïdi said. “In the first half, we didn’t give them any chance to play with us, dominate us or do whatever they wanted to do. We were more engaged up front. I am very proud of our players and what we were able to do.”

Hartford took a 1-0 lead with 20:49 left in the first half when Dixon headed a beautiful lofting pass from Barrera into the penalty area in the goal. Hartford’s Tyreke Johnson had the ball near the top of the penalty area but passed it back out of the area to Barerra.

“Danny picked me out with a great ball,” said Dixon, who scored his second goal of the season. “I just had to get a head on it. The ball did all the work for me.” Barrera’s six assists are second in the USL Championship behind Kenardo Forbes of Pittsburgh, who has seven in seven games.

The Athletic extended their lead to 2-0 with about six minutes left in the first half on a defensive effort by New York goalie Adam Bobocea, who was making his first professional start.

On a corner kick, Barrera lofted the ball into the penalty area and the ball slipped through Bobocea’s hands and right to the feet of Hartford’s Sam Strong, who redirected the ball into net for a 2-0 lead. It was Strong’s first goal of the season.

New York cut the lead to one goal with 16 minutes remaining as Caden Clark was played into the right side of the penalty area and picked out Sebastian Elney for a goal into the left corner of the net.

Hartford outshot New York, 16-12. Goalie Parfait Mandanda had one official save but worked hard in net to gobble up loose balls and earn his fifth win of the season.

“We have our feet on the ground. We know there are a lot more games left to play. It’s one game at a time and we look forward to our next game,” Hartford defender Matheus Silva said.

The top two teams in each group make the USL Championship playoffs in October.

Hartford returns to action on Wednesday with a road game at Philadelphia Union II that will be broadcast on WTCX Channel 59 beginning at 7 p.m. The Athletic return home to host the Louden Athletic on Sunday, August 23.