EAST HARTFORD, July 1, 2021 – The rain was steady and hard throughout Thursday’s women’s soccer game between the U.S. Olympic team and Mexico at Rentschler Field but it didn’t slow down the American’s preparation for the upcoming Summer Olympic Games in Toyko.

Forward Christen Press continued to find the back of the net with two goals, Samantha and Kristie Mewis became the first sisters to get an assist and goal together in team history and Tobin Heath scored in her first game in more than seven months as the Americans shutout Mexico, 4-0 before 21,637 fans.

Stratford native Alyssa Naeher and backup goalie Adrianna Franch combined to pitch a shutout, making three saves. Seventeen of the 18 players on the Olympic roster got into the game. The Americans have now won 43 matches in a row, the second-longest streak in team history.

The two teams will play again on Monday beginning at 5 p.m.

With Press’ two goals, she has now been involved in 36 goals in her last 36 games with the national team with 16 goals and 18 assists.

The Americans got on the board in the first half with a goal thanks to the Mewis’ sisters from the Massachusetts town of Hanson just south of Boston with 21 minutes gone in the contest.

Megan Rapinoe jumped on a misplayed Mexico pass, dribbled towards the box and found Kristie Mewis near the 18-yard line. The elder Mewis centered the ball to her younger sister, Samantha, just behind the penalty spot, where Samantha took a touch to create some space and then hooked a shot past two defenders and goalkeeper Emily Alvarado.

It was the second consecutive match the two sisters were on the field together. Samantha Mewis has 76 appearances (caps) with the national team while Kristie has just 25. This was just Kristie’s third start of the season and her second in a row.

“I just had a feeling that when I passed it to her that she would take it and score,” Kristen Mewis said. “That was fun and cool.”

“It feels really good. I want to be that player if they need me in the lineup, if they need me for five minutes, come in for 30 minutes, if they need me to start. I want to be a reliable teammate and I will do whatever I can to help win a gold medal (at the Olympics) is what I will do,” Kristie said. “All of these teams are bringing new challenges to us so my job is to solve problems fast so that we can score goals and break them down. I tried to work hard and defend well.

As the rain got a bit lighter, Samantha Mewis catalyzed the second goal in the 39th minute. She did well to split the defense and slip a pass to Rapinoe running into the penalty area on the left side. Rapinoe then dribbled to the end line and played short pass back to Press for her to touch home her 62nd career goal.

The Americans continue to press in the second half. Seconds after the second-half whistle, Crystal Dunn drove down the left wing and teed up Morgan, but her header flew out of bounds. Dunn had a nice chance of her own in the 65th minute, forcing Mexico goalkeeper Emily Alvarado to make a leaping save, while Rapinoe hit the post on a shot from the top of the box in the 72nd minute.

Veteran Tobin Health entered the game in the 72nd minute and scored with 52 seconds. Less than a minute after entering the match, Morgan found Heath on the run down the middle of the field. She looked up and ripped a shot from 36 yards out that skipped off the wet turf, off the left post and in for her 34th goal and first score since Olympic qualifying in Jan. 2020. 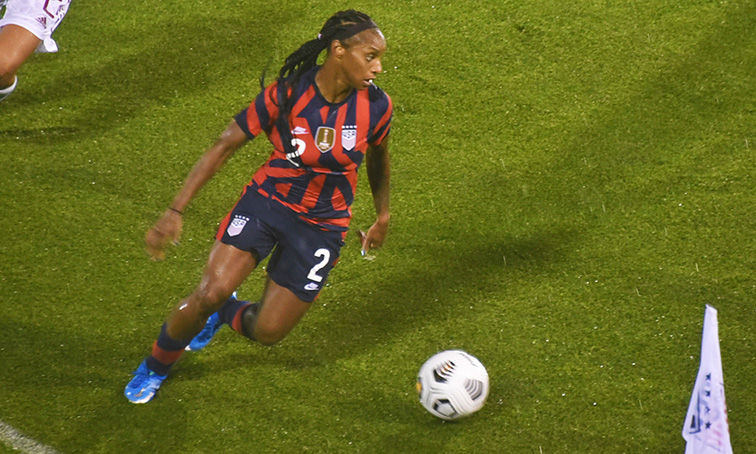 Press put an exclamation point on things in the 85th minute, continuing her scoring streak by deftly deflecting a nice cross from substitute Tierna Davidson into the back of the net for her 63rd career goal.

“I was just excited to get into a game at some point,” Tobin said. “I was just happy to be back in a game. It was a picture perfect play. It was a great transition ball from Alex.”

Tobin praised the hearty fans, too. “The crowd was awesome today especially in the rain. They came prepared with all of those ponchos,” she said.

Before the rains came — and it started near kickoff — young fans cheered on their favorite players.