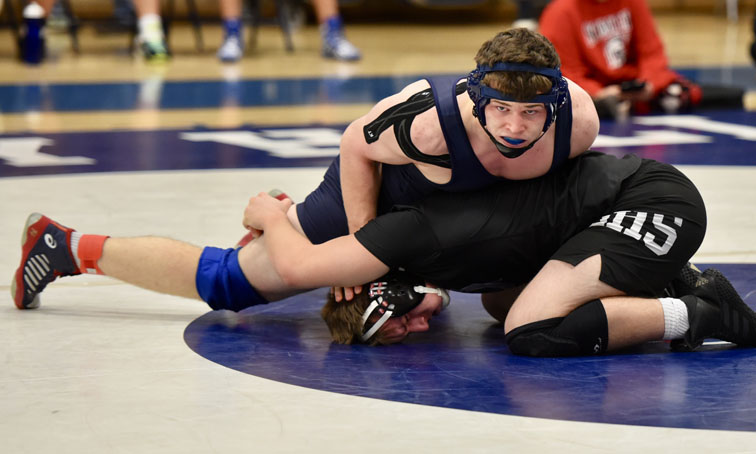 AVON – Next winter, Avon High wrestling coach John McLaughlin is going to miss that nice 1-2 punch he had at the end of his lineup.

This winter, the Falcons had two outstanding wrestlers at the end of the lineup to clean up and pick some points. Junior Chris Gens (220) will be play next season but senior Henry Schrecengost (275) will be graduating in June.

Both wrestlers won state championships this winter with Gens picking up a 7-4 win over Max Schlein of Berlin in the Class M championship match in Guilford and Schrecengost, just a second-year wrestler, defeating Ellis Tech’s Hayden Minski in the Class M title match.

Gens and Schrecengost’s victories helped Avon finish third in Class M behind Killingly (202½) and Foran-Milford (161). Avon had 151 points and their best-ever finish in Class M – topping the fourth place finish in 2013. It’s the highest finish for the Falcons since taking second in Class S in 2006.

“Those two worked so hard with each other,” McLaughlin said. “Some of their toughest matches were (against each other) in practice. They fed off each other and made each other better.”

They are the first state champions for Avon since 2013 when brothers Jimmy and Joe Murphy brought home Class M state championships. Jimmy won at 145 with Joe taking the title at 170.

Gens (40-5) had little problems winning his first state championship with three consecutive pins to get to the final. He pinned Masuk’s Peter Dutkowsku in eight seconds in the first round.

In the final, he led Berlin’s Max Schlein 4-2 after two periods. Gens got an escape and immediate takedown with 1:45 left in the match to take a commanding 6-2 lead.

Schrecengost (40-3) also had three consecutive pins to earn a spot in the final. He took a quick 4-0 lead in the first period with a takedown and a two-point near fall. He extended the lead to 6-0 with a two-point takedown in the third period.

Bhabad (37-8) dropped a 4-0 decision to Platt’s James Rondini in the semifinals but rallied to beat Johhny Cerquiera of Abbot Tech-Danbury in the consolation final to take third, 6-2.

Colman (39-8) also lost a semifinal match to Suffield’s Miguel Gonzalez but won his final two matches of the day to finish third. He beat Joel Barlow’s Frankie McNeary in the consolation final, 2-1 taking advantage of a penalty point (technical violation) by McNeary with 42 seconds left for the winning margin.

At the State Open, Gens and Bhadbad each finished fifth. Bhabad lost to Simsbury’s Ty Finn in the quarterfinals, 7-1 but wrestled strong in the consolation bracket. He earned a medal with a 15-11 win over Staple’s Terry Brannigan. Leading by one, he got an escape with 50 seconds remaining and a takedown with 35 seconds left to secure a 15-11 victory.

Gens lost his first match of the tournament with an 8-3 loss to Shelton’s Ray Weiner, who would eventually wrestle in the championship match. But Gens didn’t lose his focus and won four straight consolation round bouts to earn a medal.

“The wrestling here is really tough,” McLaughlin said at the State Open. “We had a great day on the second day. We came back really hard.”

Gens beat Plainville’s Travis Boone in a thriller to earn a medal. Scoreless after two periods, Gens got a reversal with 1:28 remaining to take a 2-0 lead only to see Boone get a reversal of his own with 56 seconds left. An escape with 29 seconds to go lifted Gens to the 3-2 victory.

In the fifth place match, Gens beat Wethersfield’s Austin Harnish, 3-2 thanks to a takedown with 48 seconds left that gave him a 3-1 advantage.

Schrecengost went 2-2 at the State Open while Colman was 3-2. Johnson lost his two matches.

With the fifth place finishes, Gens and Bhabad earned invitations to the New England wrestling championships in Providence. Bhadbad wasn’t able to compete but Gens did, dropping his two matches.

But it still a noteworthy season for the Falcons, who won their first-ever CCC championship by taking the CCC North title and posting their first undefeated season (22-0) since 1987. They are on a 26-match winning streak. It’s just their fourth undefeated season in team history.

“Being undefeated wasn’t even one of our team’s goals. It was just a byproduct of the team’s hard work. What a fun ride this has been,” McLaughlin said after the team won the CCC North championship.