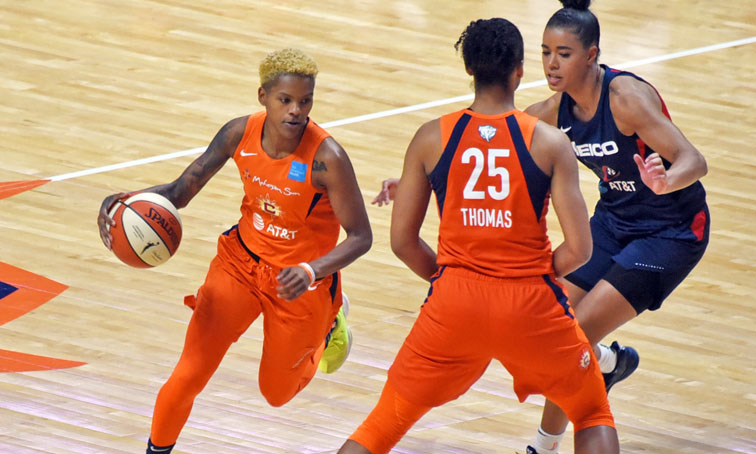 Courtney Williams gets some help from teammate Alyssa Thomas in game 3 of the WNBA finals in Uncasville. The Sun will play Washington Thursday night for the WNBA championship.

There have been plenty of championships won by Connecticut-based teams, most notably by the University of Connecticut’s women’s basketball team with a record 11 NCAA titles. It casts a long shadow over athletics in the Nutmeg State.

It’s been a little more sparse at the professional level. The Hartford Wolfpack won a Calder Cup championship in 2000 in the American Hockey League. The beloved Hartford Whalers won just one playoff series during their National Hockey League tenure in Hartford.

Before they were the Hartford Yard Goats, the New Britain Rock Cats won a share of an Eastern League baseball championship in 2001 when the EL championship series was cancelled after the September 11 attacks.

On Thursday night, the Connecticut Sun can become the first major league-level franchise from Connecticut to win a league championship when they face the Washington Mystics in the decisive game five of the WNBA championship series.

The best-of-five series is tied at 2-2 after Tuesday night’s thrilling 90-86 win at the raucous and loud Mohegan Sun Arena. The Sun had an 18-point lead but saw it evaporate in the third quarter. The Mystics led by five with 6:51 remaining but couldn’t pull away.

Trailing by one with 25 seconds left, a wide-open Aerial Powers missed on a three-point shot that bounced off the rim and into the hands of Connecticut’s Jonquel Jones. The Mystics missed their last five shots from the field while the Sun converted with big three-point shots from Jasmine Thomas and Shekinna Stricklen in the final three minutes.

“Both teams in the fourth quarter were making big shots,” Sun head coach Curt Miller said. “We would make a three, they’d answer with a three. Ultimately we made a few more plays down the stretch, got to the foul line tonight more than they did.”

All year, the Sun have been aiming for this. While they have believed, there weren’t many other folks touting the Sun as a contender. Connecticut has gotten to this point with a balanced attack from:

“I credit our players. There was a lot of pressure from the campaign of “Burn It Down” to being really transparent and open dialogue since training camp that we wanted to take the next step,” Miller said. “And the players handled that pressure, handled that honest talk out in the media, that this team, this was the year that was circled. This was the year that we wanted to take that next step.”

The Sun won more than 20 games for the third straight season, going 23-11 in the regular season. Connecticut won their first playoff game since 2012 with a sweep of the Los Angeles Sparks.

Yet, they still feel disrespected and it fuels them. Jasmine Thomas sat on the set at ESPN during an early round playoff game as two analysts called the Sun a collection of role players. Much of the discussion after the Sun’s sweep of Los Angeles was on what was wrong with the Sparks – not what Connecticut was able to do.

“We were not satisfied. No one thought we would be here,” Williams said. “We keep that chip on our shoulders. No one thinks we can do this other than my daddy and our loving parents. We know what we can do. Now, it’s time to go get one in DC.”

“It means a lot. It means everything,” Jasmine Thomas said of an opportunity to play for a championship. “Just how hard we fight, how much this means to us, we talked about this whole playoff time like us being disrespected and people thinking we’re just going to give up easy, and we’re not. We’re going to fight every single second because we deserve to win a championship, as well.”

It won’t be easy. The Mystics can shoot the basketball, especially from three-point range. They tied a WNBA-record with 16 three-point shots in game three. They have the league MVP Elena Della Donne, who has been slowed by a herniated disc that is pinching a nerve in her back but can still put the ball into the basket with a sweet shot.

Kristi Toliver, who won a WNBA title with the Los Angeles Sparks in 2016, has been a dynamic player going to the basket for the Mystics along with Ariel Atkins and guard Natasha Cloud.

Emma Meesseman has been outstanding off the bench, picking up the scoring slack for Della Donne. Meesseman can shoot from the outside, drive to the basket and battle Jones in the low post. Meesseman had a playoff career-high 27 points in the game one win and topped that with 30 points in game two.

And then, there is Mike Thibault, the Mystics coach and the man who has won more WNBA games than any other coach in league history. It was Thibault that was on the Sun bench when he led Connecticut to the WNBA finals in 2004 and 2005. That was the closest the Sun had come to a championship until now.

It will be the seventh time that the WNBA finals have gone the distance since the league went to a best-of-5 in the championship series and the fourth time in the last five years.

“Ultimately when the ball tips up on Thursday, it’s going to be who stays true to themselves, who imposes their will on their style and their system, and who plays with more energy,” Miller said. “It is exhausting. You know, I can’t wait to have a few days off.

“But we’re having the time of our life right now. Nothing better. You dream as a little kid being in a deciding final game, a Game 7, a Game 5 of a series to win a world championship. If you grew up a basketball fan, these are the moments that you dreamed of.”

Lights on Avon fundraising pauses as country deals with pandemic