Protesters in Sunday’s rally in Collinsville take a kneel to honor the men and women across the nation who have died in police custody in recent years. More photos from Sunday’s event in Collinsville.

CANTON, June 7, 2020 – There have been so many protests around the United States in the wake of the killing of Minnesota’s George Floyd, the black man who has handcuffed and in police custody. It has sparked an enormous debate within the nation on police brutality and systemic racism that can limit the opportunities for people of color.

Two Canton High sophomores wanted to make sure the people of Canton and the general area had a chance to voice their views in public.

A protest rally to support Black Lives Matter and to remember some of the men and women who have died in police custody in recent years was held in downtown Collinsville on Sunday morning. A few hundred protesters stood on both sides of Bridge Street near the U.S. Post Office in Collinsville, which is a section of Canton.

The U.S. Census Bureau estimates that nearly 90 percent of town residents are white with 3.4 percent black or African American. The 2010 census said that Canton had a little over 10,000 residents.

“Everyone really wanted to do something,” said Ella Cookman, another sophomore at Canton High. “We need to use our white privilege to amplify other voices.”

A few hundred residents from Canton and surrounding towns participated. Avon’s Sarah Thompson and her five-year-old daughter Shaelan participated in the rally. Sarah and her family visit Collinsville often. Her grandfather and great-grandfather worked at the Collins Company, when the organization was making axes, machetes, hatchets, knives, swords and hundreds of other products.

“I think it is necessary for people to be more aware of the deep systemic racism we face,” Sarah Thompson said. “And to be a model for my child is just as important. To stand our ground is critical. Without action, change won’t happen.” 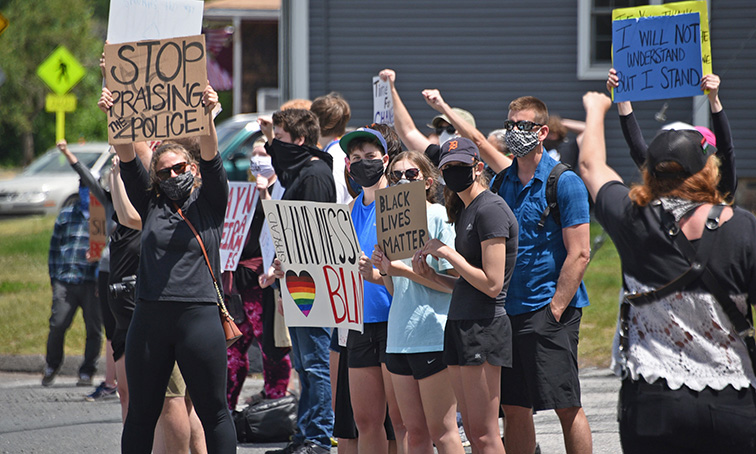