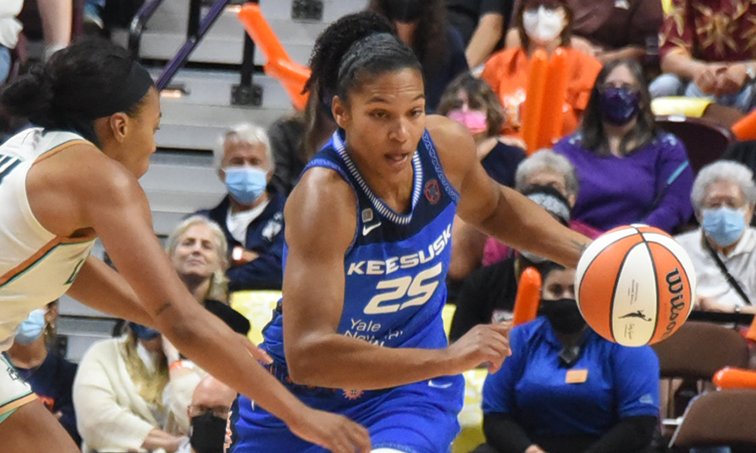 Connecticut’s Alyssa Thomas scored 10 of her 15 points in the fourth quarter as the Sun evened their WNBA playoff series with the Chicago at 1-1 on Thursday night.

The Connecticut Sun clawed their way back into Game 2 of Thursday night’s WNBA semifinal after spotting the Chicago Sky the first 11 points of the game. But as the final seconds of the third quarter ticked off the clock, the Sky still had a four-point lead.

That’s when Natisha Hiedeman drained a three-point shot with 19.5 seconds left in the quarter to cut the Chicago lead to one.

That set the stage for Alyssa Thomas and the Sun defense to take over.

Thomas, who underwent surgery to repair a torn Achilles tendon in January, scored 10 of her 15 points in the fourth quarter to help lead the Sun to a 79-68 victory over Sky in front of 6,088 fans at the Mohegan Sun Arena to tie the best-of-5 series at 1-1.

Game three is Sunday at 1 p.m. in Chicago on ESPN.

Chicago missed 12 of their first 14 shots in the fourth quarter as the Sun turned a one-point deficit into a 14-point lead. The Sky scored just nine points in the final 10 minutes of the game.

In a game that league MVP Jonquel Jones struggled with just four points, her teammates picked her up. Jasmine Thomas had 12 points in the first half including a pair of three-point shots to keep the Sun in the game. Hiedeman came off the bench to score six points.

Kalia Charles and Beatrice Mompremier, in her first appearance in the series, came in early in the first half to provide some energy for the Sun. They helped turn an 11-point deficit into a two-point deficit by the time the first quarter came to a close.

Dewanna Bonner scored 15 points for the Sun while Briann January added 12, including a pair of three-point shots.

“I thought we played with a lot of tenacity and fight, an intensity,” Sun coach Curt Miller said. “Our defensive intensity and (Alyssa Thomas’s) willingness to will everyone to play hard was just tremendous tonight. I loved our defense.”

At times, Miller sits back and appreciates what Alyssa Thomas does for the Sun.

“Think how far she is ahead in her Achilles rehab just to get back playing,” he said. “And to play in this environment and this big of a game with the tenacity and intensity (she does) is just remarkable. On a night that wasn’t (Jonquel Jones) night, her presence for us was invaluable.”

Not only did Alyssa Thomas score 15 points but she pulled down 11 rebounds, dished out six assists and had two steals.

Connecticut made stops in the fourth quarter and converted on their end.

January drained a pretty three-point shot with 9:30 remaining to give the Sun a 61-59 lead, their first lead in the game since midway through the third quarter.

It came because Jonquel Jones (7 rebounds) pulled down the offensive rebound from a missed shot from Charles and dished it to January for the shot.

About a minute later, it was Alyssa Thomas again with a basket off the glass for a 67-59 lead and a 12-0 Connecticut run.

Chicago cut the Sun lead to six but Bonner drained a three-point shot with 3:59 left to extend the lead to nine.

Again, Chicago cut the lead to six points but January scored after a nifty assist from Alyssa Thomas. Then in the next minute, Alyssa Thomas added another two baskets in the paint, including one where she got her own rebound and put it back into the basket.

Chicago began the game on an 11-0 run before the Sun climbed back into the game on the strength of eight points from Jasmine Thomas and energy off the bench from Charles, Mompremier and Hiedeman. An 11-4 run in the final 3:10 of the quarter cut the lead to two after one quarter.

“Even with a bad start we were able to put the bench in and they made a difference, as they have all season,” Jasmine Thomas said. “That has been something that has been extremely important all season.”

Connecticut built a 45-39 lead at halftime only to get off to another slow start in the third quarter as the Sky opened the second half with a 9-2 run.

“The main thing was playing harder,” January said. “They will keep moving us and moving the ball from side to side. We just needed to play harder and talk to each other. We have to start from the beginning (of the game) with that intensity on defense so they don’t get into a rhythm.”

Kahleah Cooper scored 13 points for the Sky, who were playing their fourth game in eight days while Candance Parker added 12. Courtney Vandersloot finished with 10 points as the Sky shot just 39.7 percent from the floor.

“They physically beat us to spots and 50 50 balls,” Chicago coach James Wade said. “For us to beat them we have to compete with them at that level. We have to have as much will as they do.”

NOTES: Alyssa Thomas is the first player to have 15 points, 10 rebounds, 5 assists and 2 steals off the bench in the WNBA playoffs and just the second player overall in league history according to Across the Timeline. Indiana’s Tamika Catchings did that so in a 2008 regular season game. … Jasmine Thomas played her 30th career playoff game on her 32nd birthday and ended the night with 12 points and added three assists. … Connecticut scored 40 points in the paint compared to Chicago’s 26. The Sun also had 19 second chance points where the Sky only had nine.

With season-high eight goals, Nor’Easters skate away from Housatonic

Denorfia returning to Hartford for second season with Yard Goats

Steal, layup at the buzzer lifts Canton to win over Lewis Mills

Despite pandemic, plenty of memorable athletic moments in 2021