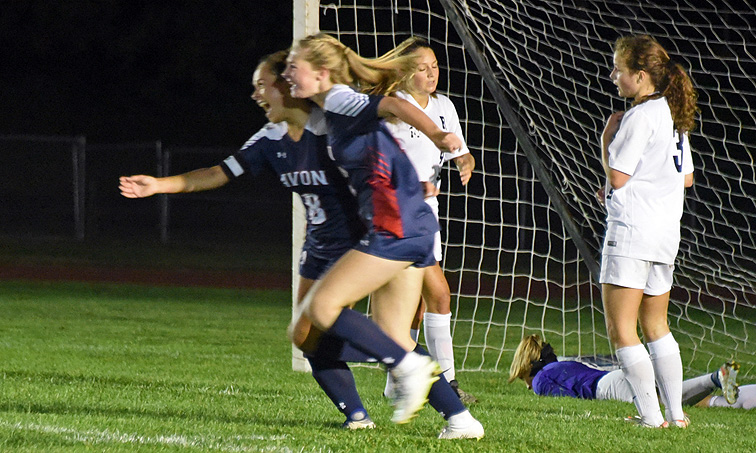 AVON, Sept. 27 – The Avon High girls soccer team scored two goals in the final 12:21 to earn their first victory of the season Thursday night under the lights at the high school.

Long-time head coach Jim Murray, now in his 33th season behind bench, hopes the 2-0 victory over Rocky Hill can be a catalyst for the Falcons, who began the season with a 0-4 record.

“We just couldn’t seem to finish out games,” Murray said of the first four games of the year with losses to Glastonbury, Simsbury, South Windsor and Conard. “We got two good goals (today) and that is what we needed.”

Last fall, the Falcons finished 3-10-3 with six one-goal defeats and missed the CIAC tournament for the first time in program history. Scoring goals was an issue a year ago and it has been a challenge thus far this season.

“This team is very good,” Murray said of his Falcons. “We just need to get into the mentality that we can beat people and score early. We have to find someone who score often.”

Rocky Hill came into Thursday night’s game under portable lights surrounding the football field with a 4-2 record. But Avon outshot the visiting Terriers, 14-7 with goalie Ali Janes making seven saves to earn her first shutout of the season.

“We changed the defense a bit,” Murray said. “We went to a sweeper, stopper setup for a safety valve. Faith (Korponang, sweeper) and Maddie (Pelletier, stopped) did a great job in the back not letting any balls through. (Defenders) Alyssa (Crawford) and Rachel (Hardin) marked very well.” 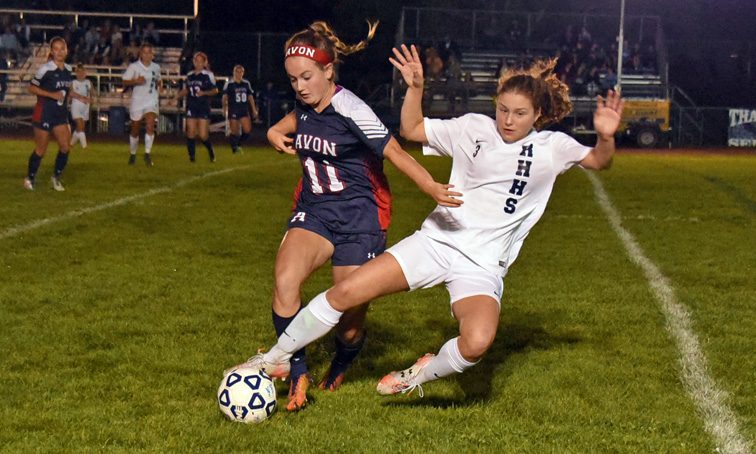 Avon (1-4, 0-3 CCC West Patriot) took the early lead when Olivia DiBella and teammate Payton Fox got behind the Terrier defense and rushed in toward the net. DiBella tapped it past goalie Isabella Calafiore for the 1-0 lead with 12:21 remaining in the game.

Four minutes later, the Falcons had a corner kick and Olivia Webster served up a nice ball for Jade Strassner, who scored with 8:21 left in the game for a 2-0 lead. It was Strassner’s second goal of the season.

And then, Avon closed out the Terriers (4-3, 2-2 CCC North Colonial) to secure their first win since October 20 a year ago. The Falcons closed out the 2017 season with three consecutive ties.

NOTES: Avon lost to Glastonbury, 7-1 on opening day and was shutout by Simsbury, 3-0, under the lights at Holden Field on September 11. Since then, they dropped one-goal decisions to South Windsor, 2-1 and Conard, 3-2. Strassner scored against South Windsor with Webster and Emma Raines scoring against Conard.

Charron selected to play in JCC Schoolgirl Classic in Bridgeport