More than a thousand peacefully protest in West Hartford

WEST HARTFORD, June 2, 2020 – It’s been just over a week since George Floyd, the 46-year-old black man from Minnesota, died handcuffed in police custody.

Floyd’s death has sparked protests across the nation and the world. Looting, rioting and clashes with police have followed in many cities causing additional pain and suffering to the community.

That pain was evident on Tuesday night in front of the Town Hall in West Hartford as more than a thousand residents came together for a peaceful two-hour rally to protest Floyd’s death – another death of a black man at the hands of police.

When the speaking was complete, the hundreds of participants marched through West Hartford center before concluding the rally on the steps of City Hall.

It was a diverse crowd of participants. The age of the crowd was younger but perhaps older residents were hesitant since we are still in the midst of the Coronavius pandemic.

Speakers urged people to do more. It is not enough to come to the protest with a sign, one speaker said. You have to keep fighting racism and prejudice in the coming days, weeks and months ahead. One speaker shared the story of her family coming back from a trip from Ohio only to be profiled and pulled over before they were allowed to go on their way.

One young woman spoke glowingly of her boyfriend and her fears that one night, he might not make it home.

One youngster spoke of her father, who is a corrections officer here in Connecticut, and then collapsed sobbing into the arms of another speaker because she imagined what it would be like if her father was killed.

West Hartford Police Chief Vernon Riddick, Jr., addressed the gathering. Riddick, who is black, has been a police officer for 27 years, including 24 years in Waterbury. He has been the chief in West Hartford for the past two years.

“I know what urban policing is all about. I know what policing in West Hartford is about,” he said. “I also know what wrong policing is about. When I saw that video (of Floyd behind held down on the ground), I was sickened. It took me two days to watch the entire video.”

One white officer had his knee on Floyd’s neck for more than eight minutes – 8:46 to be exact. 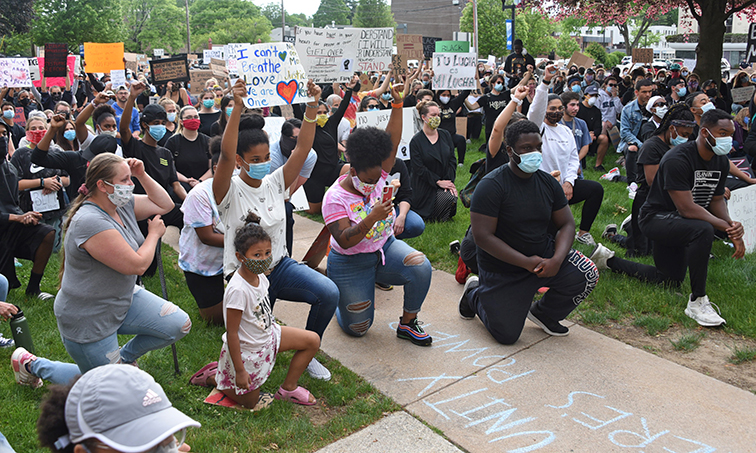 “It’s not acceptable,” Riddick said. “We need to speak out. The good cops have to stop the non-sense they see out there.”

Riddick talked about he and his brother went into police work to make a difference. He is still at it.

“I stand with others trying to make change,” he said. “We will change.”

One speaker read off the names of several black men and women who have died at the hands of the police in recent years. The crowd also took a knee for eight minutes and 46 seconds — the time that the Minnesota police officer kept his knee on Floyd, ending his life on a city street.

West Hartford Mayor Shari Cantor also make a brief statement. “This our moment to turn away (from the mistakes of the past) and be challenged to be better and to do better.”

More photos from the rally in West Hartford 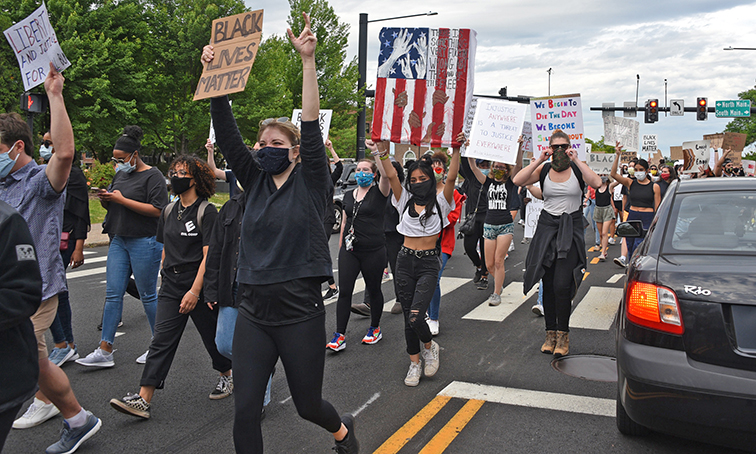 Protest participants march down the street in downtown West Hartford center during Tuesday’s protest. More photos from the rally in West Hartford