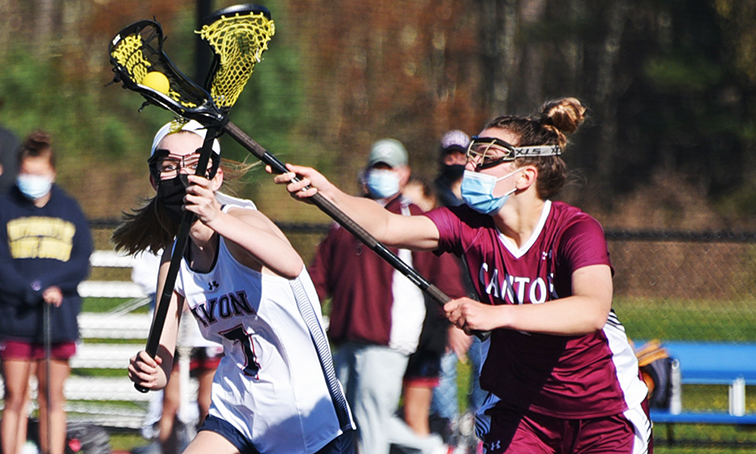 AVON, April 26, 2021 – Not only did the COVID-19 pandemic erase the varsity seasons for high school teams across the state but it also erased the junior varsity seasons as well. No one played last spring with the athletes not getting a chance to grow on and off the field.

This spring, the kids are getting that experience on the varsity field.

Few players in Monday’s girls lacrosse game between Canton and Avon saw any time at the varsity level two years ago. So, the results are a bit inconsistent as the athletes learn in real time.

The Canton High girls lacrosse team led by five goals at halftime and had another five-goal lead midway through the fourth quarter only to see the Falcons cut the lead to one with 4:28 remaining.

But the Warriors played some solid defense and controlled the ball well enough to win their first game of the season with a 10-9 victory over Avon in CCC North action.

Emma Mates and Gabby DelSanto each had a season-high four goals for Canton (1-2, 1-1 CCC North) while Jordan Defina had two goals. Rachel Flink made 12 stops in net to earn the win.

“We have yet to play really well,” Canton High coach Sean Cole said. “It’s an entirely different year than many people are used to. We are a giantic work in progress. We show better in practice than in games. Not of these girls have played a second of varsity ever until this year so we are figuring things out.” 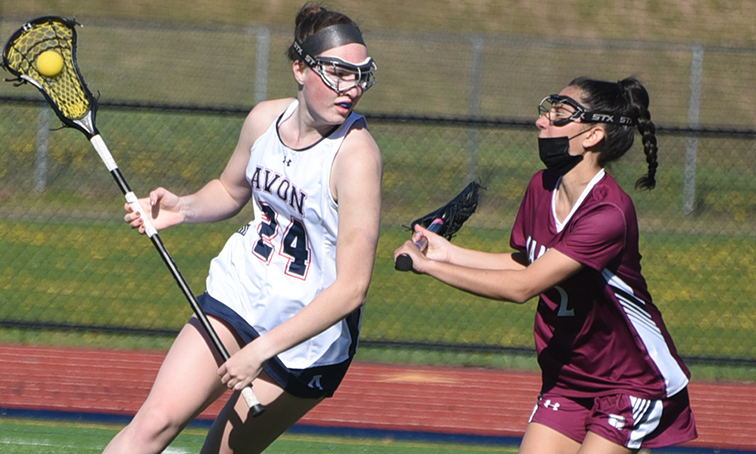 Avon (1-3, 0-3 CCC North) came into the game following their first win of the season on Friday – a 10-8 victory over Rockville. The Falcons trailed 6-1 at the half but scored eight goals in the second half and had two possessions in the final minute to try and tie the game.

“I know it is a loss but it was a well-fought-battle,” Avon High coach Bridgit Hogan said. “We dug ourselves a ditch in the beginning being down 6-1 at the half. I have been talking to the girls about energy and passion and we never stopped fighting during this game. It’s really not a loss for me and my team. We learned from this one.”

Ashley Blackmore led the Falcons with three goals while Kali Fontanella and Hayley Luby had two goals each. Luby had two goals in the final six minutes of the game, including a score with 4:28 remaining that cut Canton’s lead to one goal, 10-9.

“We’ve really built (up) our team chemistry and learned to work together,” Luby said. “The first two games (a 22-3 loss to Glastonbury and a 14-4 loss to Simsbury) were a little rough but we’ve come back from that in these (last) two games. Even this was a loss, it was honestly our best game of the season so far.”

Avon had two opportunities to get a shot off in the final minute and tie the game but Canton’s defense made plays that prevented the Falcons from getting any good shots on net.

“We seem to be a better defensive team than offensive one right now,” Cole admitted.

Avon played tough in the second half. After Canton extended their lead to 7-2, the Falcons quickly cut the lead to three on goals from Blaha and Fontanella. The Warriors responded with three quick goals, including two from DelSanto to grab a 10-4 lead.

But Avon scored four consecutive goals on scores from Blackmore, Luby, Kelly Hayes and Luby to cut the lead to one.

“It’s a super young team this year, “Hogan said. “I only have one player from two years ago so really we’re getting experience. We trying to bring a positive attitude lots of passion and energy to every single game and gain the experience for the young players.

“So many girls are just so happy to be playing, having some fun out here and learning a ton.”

Avon returns to action by traveling to Conard on Wednesday while Canton hits the field again on Tuesday when they travel to Farmington for a 4 p.m. contest. 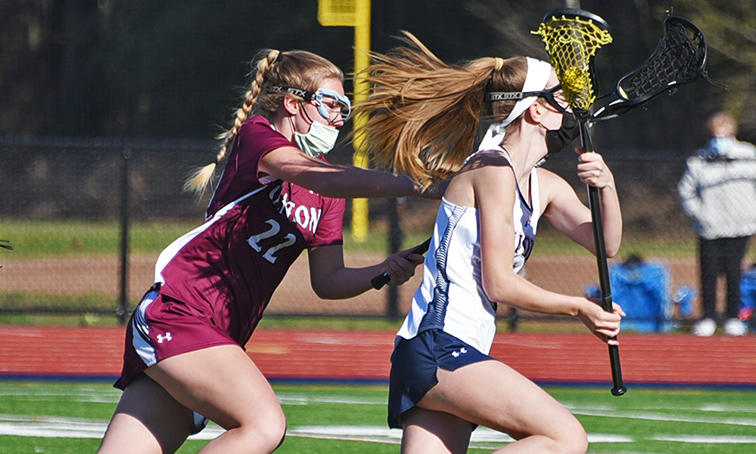 Two local swimmers will be seeking berths on U.S. Olympic team at trials