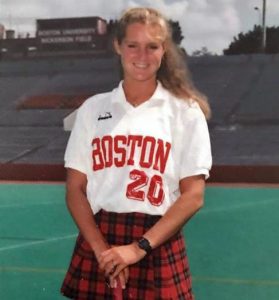 CANTON, September 13 – Sharon Eifes Lawrence, who began playing field hockey in junior high in Canton and quickly fell in love with the sport, will be among nine women and men to be inducted into the Connecticut Field Hockey Hall of Fame on Sunday at the AquaTurf in Southington.

Eifes Lawrence, who graduated from Canton High in 1993, helped the Warriors win back-to-back Class S state championships in 1991 and 1992. And Canton was the No. 1 ranked team in the state after both seasons.

She is being into the Hall of Fame for her play in college at Boston University where she helped the Terriers win an America East championship and qualify for the NCAA Division I tournament in 1996 and where Eifes Lawrence earned All-American honors in 1997.

Eifes Lawrence will become the fourth woman with Canton connections to be inducted in the Hall of Fame. She will join former teammate Erin (Murphy) DuFresne, Anna Norland and her former coach Nancy Grace.

Eifes Lawrence praised Grace for her role leading the Canton program. “She set the foundation for a lifetime of challenges,” Eifes Lawrence wrote in a biographical summary for the Hall of Fame. “Her tough love helped me learn respect, hard work and to never take anything for granted. She expected your best effort at all times and the reward would be victory.

“I learned respect, how to be a good teammate, to be a leader, to play by the rules, to work hard to earn my spot and never take advantage of it,” Eifes Lawrence wrote. “They were amazing life lessons that have so helpful during my professional career.”

Eifes Lawrence is being honored for her collegiate career at BU, where she earned a Bachelor’s degree in Clinical Exercise Physiology in 1997 and a Masters of Education in 1998.

After a redshirt season in 1993, Eifes Lawrence played four years with BU, primarily as a back and a sweeper, scoring 14 goals with two assists in her career. She helped BU win the America East title in 1996 and play in the NCAA tournament. She anchored a defense that was second in the nation in goals against average (0.72).

As a senior in 1997, she was the team MVP and earned All-America East honors. She was a third team All-American selection.

She had a game to remember against Hofstra in her senior year, scoring three consecutive goals on three penalty corners in just under six minutes in an 8-3 victory.

“To this day, I can pick up a stick and feel a rush of excitement,” she wrote. “But beyond the game itself, I have gained a family of really special people in my life. When I pick up my stick, it is this overwhelming feeling of love, support and warm memories that reminds me of all the great people in my life that helped me to become who I am today.”

Sharon Eifes Lawrence playing for Canton High on the grass field that is near the current football and track and field complex.

Nelle Jennings Andrews is currently a teacher at Miss Porter’s School in Farmington where she is the head field hockey coach and assistant lacrosse coach. A former standout player at Connecticut College, she coached at Farmington High for 19 years, winning two conference titles and leading the Indians to the Class M finals in 2002.

Sandy Wickman Mason played field hockey at Granby under legendary coach Dot Johnson. Since taking over for Johnson at Granby in 2003, Wickman Mason has led Granby to six Class S titles including three straight from 2009-11. In 2012, she received the Connecticut High School Coaches Association Coach of the Year Award and the Doc McInerney Coach of the Year Award from the Connecticut Sports Writers’ Alliance.

Heather (Waters) Casinghino was a two-time All-State selection at Nonnewaug, leading her team to the Class S championship at a senior, beating Avon in the title game, 3-0. She went on to play at Springfield College. Today, she is the head coach at Suffield High and her daughter is one of the top players on the Wildcats.

Dani Brown, an English teacher at Brien McMahon in Norwalk, was a standout player at Fairfield scoring 35 goals including nine game-winning scores. She began officiating in 2004 and has worked as a high and college official. She has officiated NCAA Division I and Division II tournament games along with the MAAC Tournament contests.

Two long-time coaches at UConn will be honored. Paul Caddy, the associate head coach at UConn for the past eight years, has been with the Huskies for 18 years. His primary focus is defense and player and team development, including technical and tactical advancements.

Cheri Schultz, the assistant coach at UConn, has been with the program for 18 years and works primarily with the goaltenders. The Huskies won the team’s fifth national title last fall and it was UConn’s third NCAA title in the last five years.

Enfield’s Lisa (Scavotto) Capogna, a 1997 Enfield graduate, was a two-time All-State player who led the Raiders to a pair of state titles in 1993 and 1994. She played in college at Quinnipiac.

Jennifer Martha McCallum, a 2002 Cheshire graduate, was a two-time All-State selection and led the Rams to the Class L title in 2000. She played college field hockey at New Hampshire and Quinnipiac.