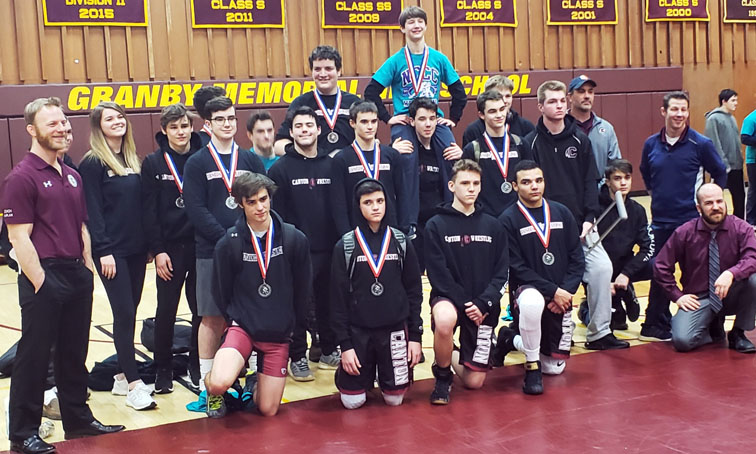 GRANBY, February 9 – The Canton High wrestling team put 11 wrestlers into the finals at the North Central Connecticut Conference tournament Saturday and won the tournament for the third consecutive season as the Warriors clinched their first league championship since 2002 with the win.

Canton had two individual champions and had all 14 wrestlers finish in the top four of their respective weight classes. The Warriors beat Suffield/Windsor Locks, 200½ to 177.

But earlier this week, it came to light that the league had modified its criteria for deciding a league champion in wrestling – a point system based on a team’s performance in dual meets and the league tournament.

Teams earn a point for each dual meet win and a ½ point for every team they beat at the NCCC Tournament. While Canton was still in a very strong position to claim the pennant, they had to once again go prove it on the mat.

The Warriors went 11-3 in the semifinal round to take control of the tournament and Gabe Deiulis added a few more points into Canton’s column before the finals began by winning his consolation final at 132 pounds.

“It reinforced what I’ve about this team all season,” Canton coach Josh Bristol said. “We rely on 14 kids who know how to wrestle and love it.

“We don’t worry about State Open placewinners (wrestlers who finish in the top six at the Open) or having superstars as much as we focus on making everyone on our team masters the fundamentals and loves the sport,” he said. 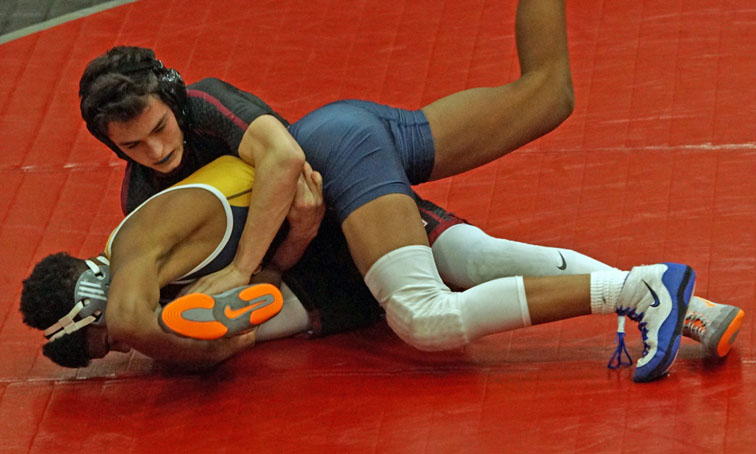 At 132 pounds, Canton senior Brian Connolly won his second NCCC title in three years with a 13-4 win over Suffield/Windsor Locks’ Joseph Nieroda. Connolly also won a NCCC title as a sophomore at 120.

Webb was looking for a second league title having won at 106 a year ago. Fluckiger was looking for his third NCCC crown after winning at 220 and 182 pounds the two previous seasons. It was the third straight finals appearance for Fluckiger.

Webb lost to Suffield/Windsor Locks’ Zachary Jones, 7-1 while Bahre was pinned by Somers’ Cooper Barrett in the 120 pound final.

Fluckiger (195) was pinned by Coventry’s John Vignone in 5:42 while Suffield/Windsor Locks’ Will Robb pinned Dinneen in 1:33.

Canton returns to action on Friday night when they head to Windham to participate in the Class S championship meet this weekend. The meet concludes on Saturday with the top six finishers in each weight class advancing to the State Open championships.

NOTES: It’s the second time in team history that Canton has won three straight NCCC Tournament titles. Canton first achieved this milestone from 1995-97. The 200½ points is a tournament record for Canton, eclipsing the 197 points they scored in 1995.