East Granby’s Doug Comstock swam across the Strait of Gibraltar to Africa a few weeks ago. (Photo courtesy Haley Comstock)

EAST GRANBY – It’s been a few weeks now but the glow hasn’t worn off for East Granby’s Doug Comstock.

On April 26, Comstock successfully swam 8.3 miles or 15.4 kilometers the across the Strait of Gibraltar from Spain to Morocco on the African continent. 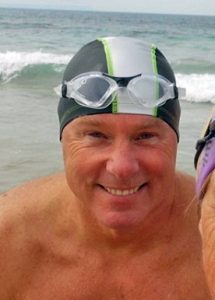 “It was magical,” he said. “It was real satisfying in that this swim wasn’t an easy swim. This was one of the top five most difficult swims I have ever done.”

Having his 20-year-old daughter, Haley, onboard the escort boat that accompanied the swimmers across the channel made the experience that much sweeter.

One of the biggest challenges swimming across the Strait of Gibraltar is the strong currents and tides once you get near the African coast. “Trying to get through the current is a real challenge,” said Comstock, a 1973 Canton High graduate. It took Comstock and his two partners nearly 40 minutes to complete the final 800 meters as they reached the African coast.

“You’re bucking the tide and it is pushing you all over the place,” he said.

Comstock was also struggling in the water because he threw up about three hours into the swim. He usually eats eggs for protein on the day he prepares for these marathon swims but it seems one of his eggs was rotten. He didn’t realize it until he had swallowed it with a gulp.

He had no issues for the first three hours of his 5 hour, 40 minute swim. But around the three-hour mark, he threw up.

“I knew I was in trouble,” he said. “I spent the next 2½ hours dry heaving (as he swam).” Most of us would get sick and lie down and rest for a few hours. Comstock was in the middle of the Strait of Gibraltar.

“It’s uncomfortable but you keep swimming through it,” he said. He got some cramps in his legs but took a few gel tabs to get some electrolytes back into his legs.

“The last 2 ½ to three hours, I never lifted my head from the water. I used Sal’s toes to guide me to Africa,” he joked. “As long as I kept my head in the water, I was safe.” Comstock swam with three other swimmers including England’s Sal Minty-Gravett, an experienced marathon swimmer who swam back and forth across the English Channel in one swim in 2016.

Comstock wasn’t comfortable but there was no way he was getting out of the water. He had not been able to complete his first two marathon swims and that weighed on him as he cut through the water.

“There was no way I was going to be pulled (out of the water),” he said. “I think about the panic. It’s amazing how powerful the fear of being pulled was.”

And the folks on the escort boats urged the three swimmers to pick up the pace or they might not be able to get through the strong currents near the African shore. All three began to swim faster.

“I felt like (Olympic swimmer) Michael Phelps,” Comstock said. “I touched something that I didn’t have.” The three swam hard through the water. Comstock asked the escort boat how long they had been swimming hard. Was it 15 or 20 minutes? No, it was an hour.

The water was pretty choppy, especially for the folks in the escort boats but it didn’t bother Comstock or the swimmers. “Once you are part of the water, it doesn’t hit you the same way if you are in a boat,” he said.

Comstock originally thought this would be a nice warmup for another shot at crossing the English Channel. But he quickly discovered that this was a significant challenge in its own right. “I learned never to take anything this big for granted,” he said.

He hopes to get another shot to cross the English Channel next year.

“I’m not a good swimmer. I am a determined swimmer. You don’t have to be good at something to do it,” he said. “If you wait until you are good at it, you may never be good at it.”

Comstock is being a little rough on himself. No one just wings it and swims across the Strait of Gibraltar to Africa. He has trained for years to learn how to swim efficiently in open seas with salt water stinging his lips, giant cargo ships a few hundred feet away and jelly fish and Portuguese Man of War in the water waiting to sting him.

“It felt great to touch the shores of Morocco,” he said.