FARMINGTON, March 6, 2021 – The first indoor track and field competition of the year for the Avon High program took place outside Saturday under bright, sunny skies on a windy, cold 33-degree afternoon in Farmington.

Piles of snow from the winter’s snowfall were on the edges of the track and on the infield grass.

Members of the Avon indoor track team have been training since mid-January and after eight weeks of socially distance work thanks to the COVID-19 pandemic, the Falcons were finally able to participate in a competitive meet.

Indoor track teams were not allowed to compete through March 1 but the Department of Health and the CIAC relaxed their rules earlier in the month, allowing dual meets with participants wearing masks. Outdoors was the recommended approach – although indoor dual meets are allowed.

“It was great finally getting in a meet, even if conditions were less than ideal,” Avon High indoor track coach Courtney Fusco said. “Since we have no postseason meets to qualify for, (assistant coach) Pat Skerker and I decided to focus on spring track distances in order to get our athletes ready for the upcoming season. We’re approaching our March meets with a spring training kind of attitude.”

Earlier this winter, the CIAC cancelled all winter post-season tournaments for basketball, hockey, swimming and indoor track. Wrestling was not allowed to compete at all.

“Even though the race times were far from a lot of the athletes’ personal best (times), it’s a great baseline to have,” Fusco said. “Hopefully the effect will be that many of the athletes are ahead of their peers who didn’t run indoor track once we start the spring season on March 29.”

The Falcons hope to host an intra-squad meet on Saturday, March 13, providing the snow melts off the Avon track that the Falcons have yet to use since last spring’s meets were all cancelled due to the pandemic. Avon plans to wrap up the indoor season with a meet at Southington on Saturday, March 20. 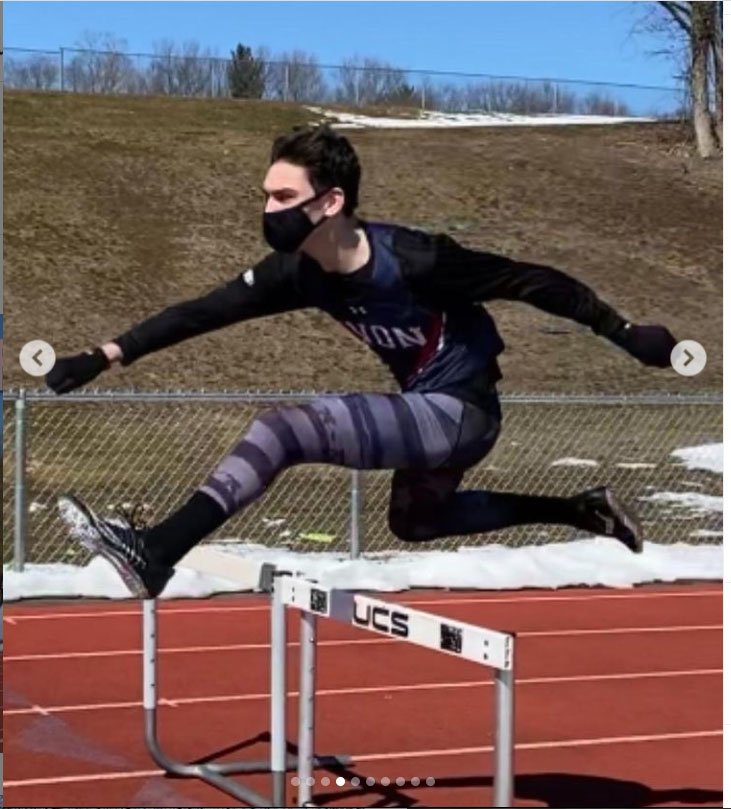 It was chilly Saturday for the opening indoor track meet of the season in Farmington. (Melissa Morgancello photo courtesy Avon HIgh track and field)

Against Farmington, no team scores were kept but several Avon runners turned in nice performances.

Defending New England champion Jack Martin won the boys mile in 4:44, a time that would be a state qualifying time in the spring. Teammate Carver Morgan was second in 4:49 while Nick Alphonso was third in 4:55 and Jevonte Eaves took fourth in 4:59. All four would have qualified for an indoor state championship meet in previous years.

Avon’s Mareen Ek won the girls mile in 5:43, a time good enough to qualify her for a state championship meet during the spring. Teammate Rebecca Berman was in second place, not too far off the pace.

Avon’s Paul Netland had a good afternoon, finishing third in the 100 meters while sweeping the shot put and 300 meter hurdles with a time of 48.55.