Harris English plays his shot on the 18th hole during the final round of the Travelers Championship Sunday in Cromwell. English won the tournament on the eighth playoff hole. (Vincent Carchietta-USA TODAY Sports)

When Bubba Watson strode to the tee on the 13th hole, he had a one-stroke lead and looked like he was on his way to a record-tying fourth straight championship at the Travelers Championship.

But his hopes melted away in the 90-degree heat and the wind and a few errant shots over the final five homes including two shots that landed in the water.

But two golfers stood tall throughout the afternoon and into the evening. Kramer Hickok and Harris English both sank crucial putts on the 18th hole Sunday at the TPC-River Highlands to force an epic eight-hole playoff run that saw both golfers make pressure-filled, knee-buckling shots over and over again.

It finally ended at 8:10 p.m. as English won earned his second PGA victory of the season with a birdie on the 18th hole.

It was the longest playoff in tournament history, exceeding a pair of seven-hole playoff runs in 1961 and 1962 when Ted Kroll and Bob Goalby, respectively, won the Insurance City Open at the Wethersfield Country Club.

It was the second longest playoff in PGA tournament history. There was an 11-hole playoff at the 1949 Motor City Open that ended with co-champions and five other tournaments with eight-hole playoffs – the most recent in 2012.

“Kramer and I made some great putts. Hats off to him for a good fight,” English said, after his fourth career PGA win. “We were both fighting. It seemed like every hole we played one guy had the advantage and the other one ended up making a six- or seven-footer to keep it going.

“It was a good fight and came down to somebody making birdie, finally.”

Each man had their chance to win in the playoff run. On the second playoff hole at 18, Hickok’s 43-putt for birdie and his first PGA Tour win just kissed the lip of the cup and spun out. On the fifth playoff hole at 17, Hickok had another potential birdie and tournament-winning put again spin out of the hole.

English had a chance to win on the sixth hole but his six-foot putt was just a bit wide.

Both men made big shots to stay in it. On the second playoff hole, English had a tough shot out of the sand bunker made famous when Jordan Spieth won the tournament in 2017. English got the ball over the lip of the bunker and onto the green to make a nice putt for par.

Hickok did the same thing on the fourth playoff hole after he sent his second shot into the sand trap.

The two men played the 18th hole six times and the 17th hole twice. At the end, the crowd was singing, doing the wave and cheering – providing the two golfers with some needed energy.

On the eighth playoff hole at 18, Hickok blinked just a bit – but not much. His third shot for birdie from about 28 feet away tailed just a bit away from the hole. English’s second shot landed about eight feet away fell into the hole for the victory.

“I’m tired. It was a hard-fought battle,” Hickok said. “That was our eighth playoff hole. I never thought I’d be playing 27 holes today. But the way these pins are situated and the wind, it just made it tough to make birdies on these last few holes, 17 and 18, the playoff holes. Harris battled so well and so hard.

“I was just trying to put as much pressure on him as possible. He was trying to do the same,” Hickok said. “I put him in uncomfortable spots, he put me in some too, and he came out on top today, and that’s a true champion.”

It was a matter of endurance and strength, too. English is just 31 while Hickok is 29.

“It was tough. I mean, my hamstrings were getting tired, my back was getting tired,” English said. “I know Kramer was probably feeling the same thing. You’ve got to lock in and make every shot the most important.”

Missing a shot meant losing the tournament so, it added to the strain.

“It’s hard to stay mentally into it and not to lose focus,” English said. “I tried really hard to stay focused and stay sharp and really be on my toes, because in a playoff situation in match play scenarios like that, you got ready for anything. I expected Kramer to hole every single putt.”

English sank a 28-foot putt on 18 in the final hole of regulation to take the lead. Hickok sank a 16-footer for par on 17 and drained a nine-foot putt on 18 to force a playoff.

Marc Leishman, who won the tournament in 2012, was in contention after shooting a 62 on Sunday but the late surges from English and Hickok kept Leishman out of the playoff.

“I think it’s just a really fun golf course, because if you hit good shots you can give yourself a lot of chances for birdies,” Leishman said. “But if you’re just a little bit off it kicks your butt. You can make bogeys from nowhere it seems like. I think that’s the great thing about it.”

Watson finished at -7 with his fourth round of a 73.

“So I’m glad that I was there, had the opportunity,” he said. “You know, I would love to do it again next week, throw up on myself again. It would it be great. I want to the opportunity and the chance to win.” 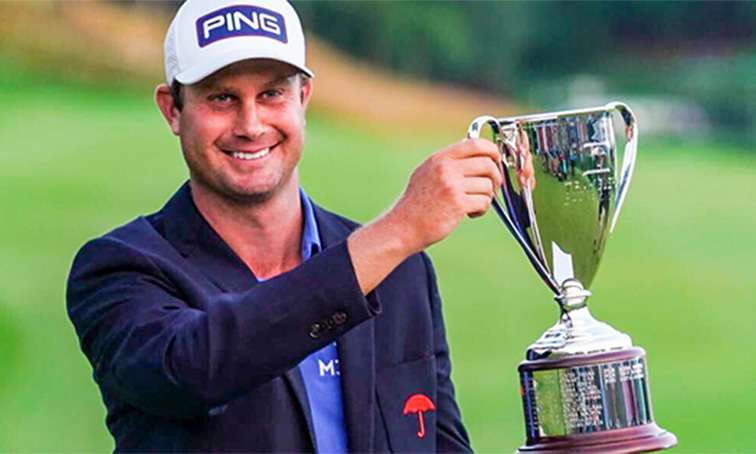