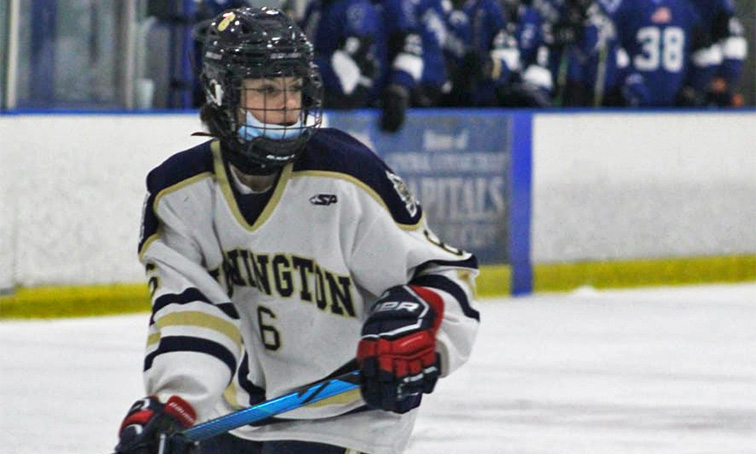 Newington co-op’s Kyle Klimas had a point for the third time in the last four games as the Nor’Easters beat Conard on Wednesday night, 2-0. at Newington Arena. (Photo courtesy Newington Hockey Booster Club)

Evan Oliver had a goal and an assist while goalie Jeremy Wagner made 11 saves to earn the shutout as the Newington High co-op boys hockey team beat Conard, 2-0, Wednesday night at Newington Arena in CCC South action.

Although the Nor’Easters came out strong in the first period firing 19 shots at Conard goalie Grayden Selstad, they were only able to capitalize with 11 seconds remaining in the period when the junior defenseman Evan Howard  (Canton High) wristed a 20-foot shot past Selstad on a pass from teammate Evan Oliver.

It was the first goal of the season for Howard.

The teams then fell into a tight-checking second period with Selstad and Newington goalie Jeremy Wagner shutting down the opposition offenses to give the Nor’Easters a one-goal lead after two periods.

The third period opened with the Newington squad peppering the Conard goal, but they were unable to beat Selstad until Oliver scored with 2:52 left as he beat the Conard keeper with a sharp angle shot that sealed the win.

Despite Selstad’s 34 save effort, the loss dropped Conard’s record to 2-3-1. The win was the Nor’Easter’s second straight and Wagner’s fourth on the season. Helped by strong defensive efforts from Howard and his Canton classmates Niko Giotsas, and Braeden Humphrey, Wagner recorded his third shutout of the season as his goals against average dropped to a sparkling 1.60 goals/game.

The Newington program consists of players from Newington, Canton, Manchester, Berlin and Cromwell.

Newington (4-1, 1-0 CCC South) returns to the ice on Saturday night at 8 p.m. as Newington Arena when they host undefeated E.O. Smith/Tolland (5-0) in another big CCC South contest.

If you can’t get to the arena, the game will be streamed live on SoLu Broadcasting.

With season-high eight goals, Nor’Easters skate away from Housatonic

Denorfia returning to Hartford for second season with Yard Goats

Steal, layup at the buzzer lifts Canton to win over Lewis Mills

Despite pandemic, plenty of memorable athletic moments in 2021