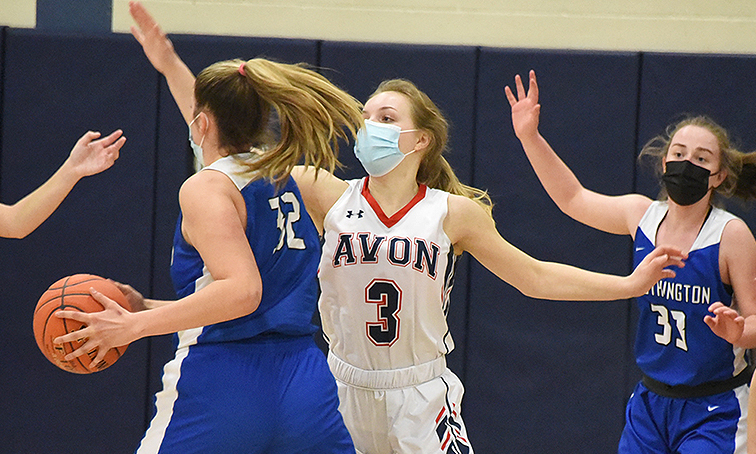 AVON, Feb. 23, 2021 – It’s tough enough to face the Southington High girls basketball team on a good night. The Blue Knights have the eighth largest enrollment of girls in the state with more than 1,000 students in grades 9-12. Avon has 447 girls in grades 9-12.

But when you are a member of the Central Connecticut Conference, as both schools are, this matchup can happen.

The two schools will face each other twice in this pandemic-shortened season as members of the CCC Region B with the schedules determined by geography – not the size of student body.

The pandemic also brings the challenge of staying healthy. The Falcons were missing three players, including two players in the starting lineup, who are quarantined due to contact tracing. They have possibly been exposed to someone who has tested positive for COVID-19.

Southington overwhelmed a young Falcon team in a 51-16 victory in CCC Region B action on Tuesday night. There are just two seniors and two juniors on the Avon team. The rest are underclassmen.

“We’re a really young team this year,” said Avon’s first-year head coach Drew Faucher. The normal starting lineup is one junior, three sophomores and a freshman. “This year is about coming together, playing hard and building that family atmosphere. If we do those things, wins will take care of themselves.”

Southington (4-1) drained eight 3-point shots and led 17-4 after one period and 30-6 at halftime. Livvy Pizzitola and Allison Carr had 10 points each for the Blue Knights. 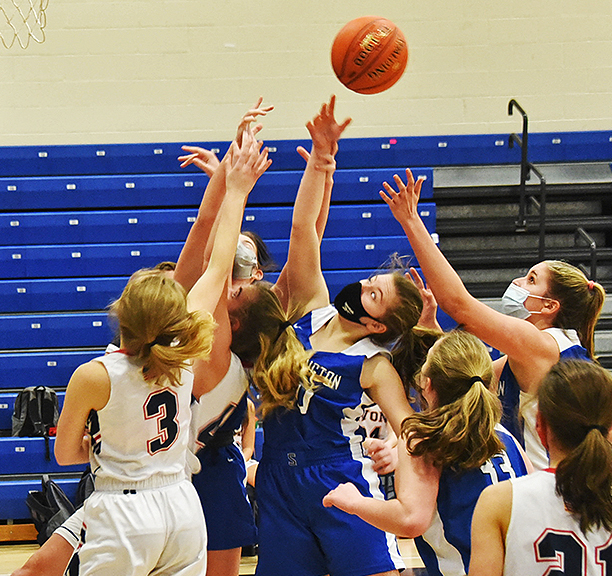 It was crowded in the lane as players from Avon and Southington battle for a rebound during Tuesday night’s CCC Region B contest in Avon.
s

“They are coming together and they are growing from this,” Faucher said. “But there will be some growing pains. Unfortunately, we got hit by the quarantine bug but we preach the next man up philosophy and the girls have risen to that challenge – just be the best they can be.”

Sophomore Sophie Mango had just two points but she had scored in double figures in three of Avon’s last four games including a career-high 17 points in her varsity debut against Bristol Central on the opening day of the season. Freshman Adi Standish added 16 in her varsity debut in that game against the Rams.

The Falcons won two of their first three games with victories over Bristol Central, 51-49, and New Britain, 38-31.

“The future is very bright if they keep working the way they are,” said Faucher, who was an assistant in the program for five years before taking off the reins this winter.

Avon (2-3) returns to action on Friday night when they face Plainville (2-3) on the road at 5:30 p.m. from the Ivan Wood gymnasium. Fans can watch online through the NFHS network. Look for Plainville High to find the contest.